Netflix’s series Stranger Things has given nerds the kind of mainstream glow-up that fantasy sequences are made of. Since its surprising break-out in summer 2016, it has transformed the oft-mocked role-playing game Dungeons & Dragons into a chic itinerary-topper at parties. It has pushed Eggo Waffle sales into the stratosphere and forced movie studios to flee Halloween release dates lest they tangle with the premiere of previous seasons. But of all the brands Stranger Things has re-popularized with its reverse-engineered sense of cool, the one that has benefitted the most is undoubtedly Netflix.

Stranger Things is the most popular streaming show in the world; last season averaged roughly four million viewers per episode within its first three days of release, according to Nielsen. With the implosion of House of Cards and Netflix’s preference to cancel most shows before they reach those expensive middle seasons, Stranger Things is the streamer’s flagship series by default if not merit. And they’re milking it for all it’s worth. The two-time Best Drama Emmy nominee is a full-blown cultural phenomenon that’s losing steam with each successive season. Which is why Season 3 should be its swan song rather than its penultimate chapter.

SEE ALSO: Does ‘The Real World’ Work in 2019? Facebook Makes a Case for Its Relevance.

This new batch of episodes picks up in the summer of 1984. Eleven (Millie Bobby Brown) and Mike (Finn Wolfhard) are locked in a serious case of puppy love, much to the hilarious chagrin of Hopper (David Harbour), who is doing his best to stay calm in his second go-around as a loving but overprotective father. Steve (Joe Keery) is struggling with his future as he works at an ice cream store in Hawkins’ shiny new attraction, the Starcourt Mall (big business vs. Mom and Pop stores is a subplot that goes nowhere), while Joyce (Winona Ryder) is still recovering from the events of Season 2 (RIP, Superhero Bob Newby). Naturally, this being Stranger Things and all, supernatural forces of evil begin to mount. Eleven closed the gate to the Upside Down in last year’s finale, but did she unintentionally lock the Mind Flayer in our world? Uh-oh with a double scoop of oh, shit.

Stranger Things 3 is not the revelation that was the show’s rookie run, nor is it the bigger and endearingly messy slow-build that was Season 2. At this point, creators and showrunners Matt and Ross Duffer have settled into a consistent, reliable high floor of quality. That level never quite elevates to something more, though you don’t necessarily lament the lack of a second-gear. It’s like the show woke up and knew that despite the love it (rightly) elicited from us all, it really had no business in the same company as fellow nominees such as FX’s The Americans and Netflix’s own The Crown.

Season 3 explores the idea of friends growing apart as childhood turns the page into teenage years with changing interests and shifting priorities. What bound people together in the past is not impervious to time’s erosion. As the young actors age, the content of Stranger Things matures with them. The Duffer Brothers have never been shy about their reverence for the Stephens (Spielberg and King), but Season 3 also includes shades of John Carpenter and Sam Raimi’s horror stylings. The squeamish may want to avert their eyes.

The character-based humor is still there. Hopper’s lovably short fuse ignites laughing fits, and Steve and Dustin’s epic bromance is sure to fuel the Internet’s next cycle of memes. Cinematographer Uta Briesewitz and the Duffer Brothers handle directing duties for the final four episodes, which come shooting out like the DeLorean returning from the future in lighting-streaked momentum. It’s good fun.

With the cast inhabiting these likable characters so pitch-perfectly and the show’s binge-tailored plots served up as delectable small plates, Season 3 maintains the show’s addictive properties. Still, it was initially designed as a one-and-done story, so while its continued existence is laudable, the natural wear-and-tear of age is beginning to show. Every series has a shelf life.

The script, despite its fun comic strip pulp, is a bit more transparent this season. Most of the dialogue is exposition for the audience’s benefit. Though it always has been—you were probably just having too much fun in the first two seasons to notice. It’s not as well hidden this time around, nor are the show’s support systems.

Stranger Things has always been built on nostalgia and indulgence—the mix of period-specific goodies and moments of fan-satisfying gratification. Season 3 includes both (shout out to phone books, New Coke and Back to the Future). But here, it’s gorging on them like a hungry demogorgon. It is almost too self-referential, bogged down by repeated flashbacks that pull you out of the present and into the past.

Maybe the Duffers felt this was a necessary refresher due to the long stretches between weekend binges and new seasons. But it comes out choppy, and feels like the show is saying, “Hey—remember all the cool stuff we’ve done?” a sign that the present narrative may be running out of steam (or Farrah Fawcett hairspray). Nostalgia is like candy—delicious treats in small doses but too much of it will leave you with a stomach ache.

This brings us, meandering and slow, to the final point: Where does Stranger Things go from here? Of course there’s a post-credits stinger to entice you into what is expected to be the show’s fourth and final season. But how many cataclysms can a group of small town kids encounter before it starts to feel like old hat?

Season 3 balances good-natured laughs with charming nostalgia through likable characters doing battle against looming horrors. Yet it feels like it’s propping up its past to justify its present. The best thing Netflix could do to maximize its brand benefit is to quit now while it’s still ahead. 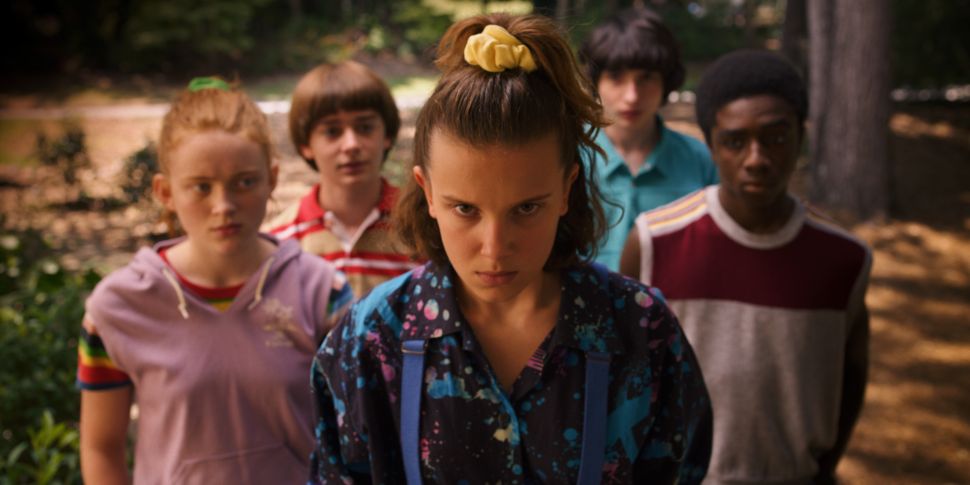