What does museum-going look like with MoMA closed for the summer? Pretty much the same, minus MoMA. Museums like the Metropolitan Museum of Art offer good reason to stick around the city, and for those who like to travel, a large number of museums outside the city make the art day trip more appealing than ever. Here are five shows at institutions that no art lover should miss.

There’s probably no more surreal show on view than “Camp: Notes on Fashion.” Defined by a sea of heavily bejeweled costumes, mannequins in fairy-like poses, and displays modeled off the beauty counters at large department stores, the show resembles a historically inspired rave featuring a musical soundtrack. (Think The Wizard of Oz’s “Somewhere Over the Rainbow.”) Expect to see rainbow platform shoes and a ball gown in the shape of a sphere amongst other dazzling costumes. Don’t expect any clear definition of camp. The exhibition text explains that no one agrees what camp is, leaving plenty of license to omit some of its more unsavory elements. Notably left out of this show is any meaningful exploration of the abject, which is to say, no vitrines filled with shit stained underwear or handout scratch and sniff cards that smell like farts. Perhaps that’s for the better.

This summer, ektor garcia turns the SculptureCenter into a handcrafted minimalist dungeon for S&M lovers. Chains made of clay and crocheted rugs hang from the museum’s ceilings, juicing the family traditions drawn from his mother’s hometown of Zacatecas, Mexico, with a sexual charge. Yet, there’s an unexpected quietness to the work, reflecting the long history garcia’s materials call back to, while using the contemporary art context to simultaneously nod to the future.

Experimental musician, writer and filmmaker Tony Conrad enjoys a kind of cult like status amongst the New York-based artists. This retrospective—the first major look at his work since his death in 2016—offers reflection on the art and career that earned him that reputation. Tracking his career from the early sixties to his death, the exhibition showcases seminal works, including his 1973 famed yellow paintings. For these pieces, he lured audiences to his screening promising a new experimental film that stretched time, and delivered a set of empty canvases. On these surfaces he drew a square outline where the film would take place, and it covered the area with cheap house paint. Over the course of fifty years the paint would slowly yellow—creating a slow-moving film.

Beyond anything else, Sara Cwynar’s photographs look great. Drawing inspiration from pre-digital photographs, marketing tropes and advertising clichés, Cwynar’s work plays with themes of the visual permanence and the mutability of images. In one work, she photographs her fingers laid on top of a reproduction of Pablo Picasso’s Les Demoiselles d’Avignon, gesturing both to enduring issues of appropriation of black culture and exploitation of women’s bodies, while also offering a vision of a more positive future. The artist nods to her own agency, in which she has the power to reimagine any image she might choose. 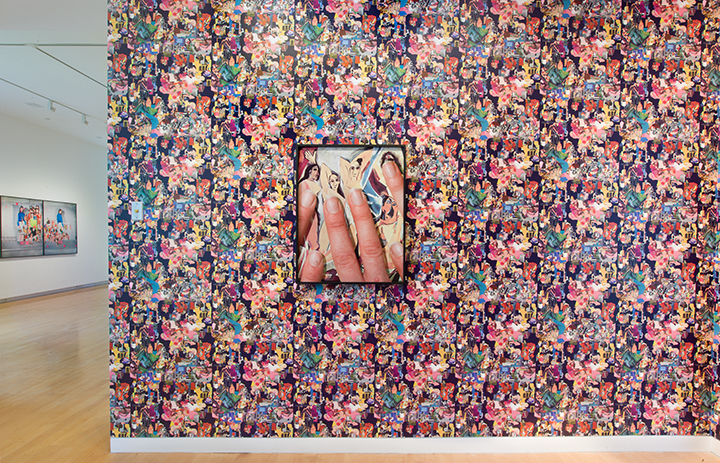