You’ve heard of Sushi Nakazawa‘s legendary origins, even if you don’t think you have. A handful of years ago, a little documentary called Jiro Dreams of Sushi ignited a passion in the hearts of viewers that they maybe hadn’t anticipated before pressing play. Almost everybody loves sushi, but almost nobody had seen sushi prepared quite like this: desperately lovingly and painstakingly, operatically pinched and flipped in a sturdy palm to create something close to culinary perfection.

Chef Daisuke Nakazawa has come a long way since training as an apprentice to culinary master Jiro Ono, and that was evident when I stopped by his namesake restaurant for an exquisite lunch last week. An hour-long symphony of perfectly rendered fish and rice and innumerable garnishes were punctuated by caviar, as well as by a tinkling background soundtrack that evoked a jazz club. I was definitely sitting in New York City, but my taste buds were transported to utopia. Nakazawa took time out of his busy schedule to speak to Observer last week about how he adapted his rigorous training to best suit an American audience.

How has Sushi Nakazawa evolved since it opened six years ago?
Yes, in October 2013. So, for the first couple of months, I tried to be more traditional, but I changed my mind. Between American products and Japanese products, I try to find a middle ground and still keep my mind on my customers changing day by day. I try to adjust each year. Through August of 2014, I was very much focused on the Japanese palate, and then I changed it little by little for the American palate. In Japan, everyone focuses on food, but I learned that in the United States, I focus more on experience, and also adjusting for the time to eat dinner or for lunchtime.

Is there anything about Japanese cuisine that Americans have refused to accept?
There might be some things I think are good, but that some people just don’t like. I have to change my mind. American diners always want the whole experience, and in Japan, I just focus on good taste. This is a big change for me.

So, basically you’ve had to change some things about your strategy without compromising quality?
Every day and every night at the restaurant I can see guest’s faces. People don’t complain to me, but I find out what they’re feeling from their eyes or their face. Their emotions. They want more, they don’t like a certain kind of fish, things like that. I’ve had to change things little by little, day by day. We’ve added truffles and wagyu beef and caviar, those kind of things I’d never thought of before.

It’s funny when you think about the steps you have to take to combine American maximalism and minimalist Japanese sushi. To that end, what are your thoughts on the controversy surrounding the Sushi Nakazawa location in the Trump hotel in DC?
For me, basically, I don’t have any kind of voting rights. I cannot do it, vote in the election. I’m just a foreigner, but I just want to say, I don’t have any affiliation with Trump. It’s no partner, the business. The Trump International Hotel is one of the [highest] hotels in the United States. But for me, it’s not my business. 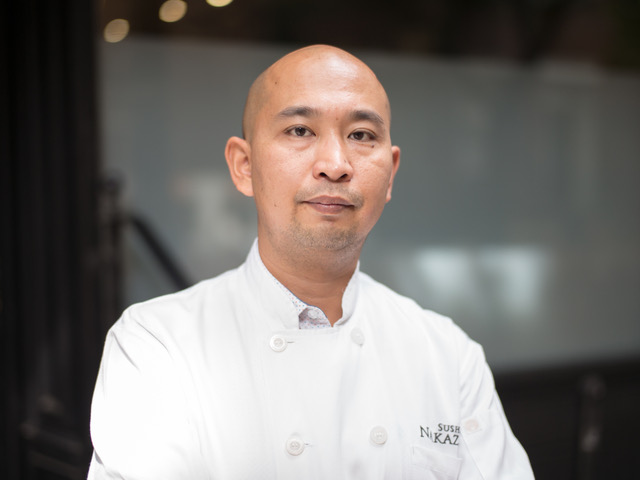