Fluorescently lit pizzerias serving by the slice are city staples dotting every borough of New York City. One pizzeria, however, Pizza Paradise in Manhattan’s Flatiron neighborhood, has a unique corner. Saeed Pourkay, originally from Iran, ladles out his home cooked Persian soups and stews for customers who line up at his minuscule corner counter space within the pizzeria.

Pourkay, who has a distinguished salt and pepper mustache and dons a bright red chef’s jacket, opened Taste of Persia NYC, six years ago. Word has spread among Iranian food enthusiasts, gourmands and those who relish unconventional dining experiences. Pourkey’s space is cramped but sufficiently accommodates several stainless steel soup servers, warming platters and rice cookers. Customers can take their food to go or eat with plastic forks at no frills tables among the pizzeria’s clientele.

Taste of Persia NYC is a lunch and early dinner spot; its small menu written on a white board changes daily. Dishes in rotation might include the hearty lamb stew abgoosht, or ghormeh sabzi, a stew of sautéed vegetables and beef or lamb, among others. Classics like ash reshteh—a rich vegetarian noodle soup with legumes topped with fried mint, caramelized onions and garlic, and a swirl of whey white sauce, known as kashk—are nearly always available.

Behind the scenes cooking prep photos, like trays of bright green okra pre-stew, are often found on Taste of Persia NYC’s Facebook page; all dishes are prepared in the pizzeria’s back kitchen.

Since opening, Pourkay has gained a culinary reputation. Taste of Persia NYC’s reviews and write-ups from The New York Times and New York magazine, among other publications, are proudly taped to the storefront window looking onto 18th Street.

But Pourkay’s entrepreneurial success was not an easy or straight trajectory. In between customers and cooking, Pourkay explained how he launched and ran a graphics and printing business with his brothers for nearly 30 years, attempted a green products enterprise which failed and led to nine months of homelessness and, finally, how his former printing business neighbors helped him launch Taste of Persia NYC.

Who are Taste of Persia NYC’s customers? Are they Iranians or of Iranian descent?
A lot Iranians, but mostly Americans. Neighborhood workers come for lunch, and it’s also becoming, I don’t want to say it, a tourist attraction. I get customers from all over the United States, San Francisco, L.A., also Japan, Australia… If they’ve heard about me, they want to come and try the food.

I noticed you give a lot of samples to people coming in.
Some people have never tried Persian food, it’s not like Chinese food that everyone knows. I’ve found the best way to introduce our cuisine is to let them try a little bit. If I have time, I give five or six samples, they choose.

Are people surprised when they find Iranian food being served in a pizzeria?
No, everybody says, “There’s a hidden gem in the corner of a pizzeria.” If you check the reviews, they say it’s the best Persian food in New York, the way your grandma or mom makes it. I tell people, “It’s not a fancy place, I don’t even have a waiter to serve you,” that’s why they come here.

I make all the food in that small space [points to the kitchen] and that interests people. They come here, they enjoy, they recommend, take photos and post them [on social media], that’s how my business has grown.

What are the popular dishes?
Ash reshteh, which is the vegetable noodle soup, fesenjān, which is a pomegranate walnut chicken, that’s very good. And the kebabs.

You first arrived the U.S. in 1978, was it because of the Iranian Revolution?
It had nothing to do with the revolution; I came a year before. I studied art but eventually quit to open a graphics house with my brothers. As the business grew, we moved into the city from New Jersey, just across 18th Street. At one point, we had three floors, 40, 45 graphic designers. Ad agencies were our main client, but we did everything. David Bowie used to give his childhood pictures to us to do the retouching.

You ran a graphics business, now you own and run Taste of Persia NYC across the street. What happened?
Twelve years ago, my brothers bought me out; I decided to do something I enjoyed. But I went through a very difficult time to the point I was homeless. All the money they gave me, I ruined, by making bad investments.

In the stock market?
No, in green products—emergency lights, radio, bags made with recycled paper. I traveled the world for several years, sort of a business trip, but at the same time, I was enjoying myself—to China, Japan, South America. I made investments, which were bad.

I had gotten a divorce and when I returned to New York, I had no place to stay. No money to even rent. A friend had a warehouse in the Brooklyn Navy Yard. I slept there, in between boxes coming in from China, leaving at 5 a.m., returning at 10 p.m. I stayed there for nine or 10 months, my kids didn’t even know I was homeless. I realized I had to do something.

You didn’t want to go back to the graphics business?
No, no, that didn’t interest me. That’s why I decided to do something different, which is cooking. I’d always enjoyed cooking; I helped my mom cook when I was a kid. When I first sold my graphics business, I went to Tehran to visit my extended family. I’d go with them to buy ingredients and then go into the kitchen to cook with them.

For fun? Or for some type of training even though you were investing in green products at the time?
For fun. But at the same time, I had planned on doing something with food but was afraid to do it.

So how did you eventually transition from homelessness to opening Taste of Persia NYC?
I went to Urban Space Management, they handle all the city’s street fairs. They knew me, and they gave me a space at the Union Square Christmas Market, on credit, to sell my soups. There was a line for my soups; I made money and could pay them back. Reporters came from the BBC, Voice of America and other places.

And so how did you end up in the corner of Pizza Paradise, a few blocks away?
After the second Christmas Market, the lines were even longer, people kept asking me where I would be selling my soups and food. I knew the owner of this pizza shop, he’s Lebanese and I was his customer for almost 10 years because my printing operation was across the street. I asked if I could rent the corner space, and he gladly gave it to me. Neighbors on this street, who also knew me, helped me buy a refrigerator, freezer, equipment. As soon as I made money, I paid them back.

You also cater events?
I’ve catered UN events many times. Four months ago I catered our [Iranian]  New Year’s [Nowruz] event, 400 to 500 people, for the mayor’s office. I do catering for CNN International with Fareed Zakaria, the whole crew. They said, “We traveled to Iran and ate something we’ll never forget.” They described it, and it’s abgoosht, the lamb dish, which I make. 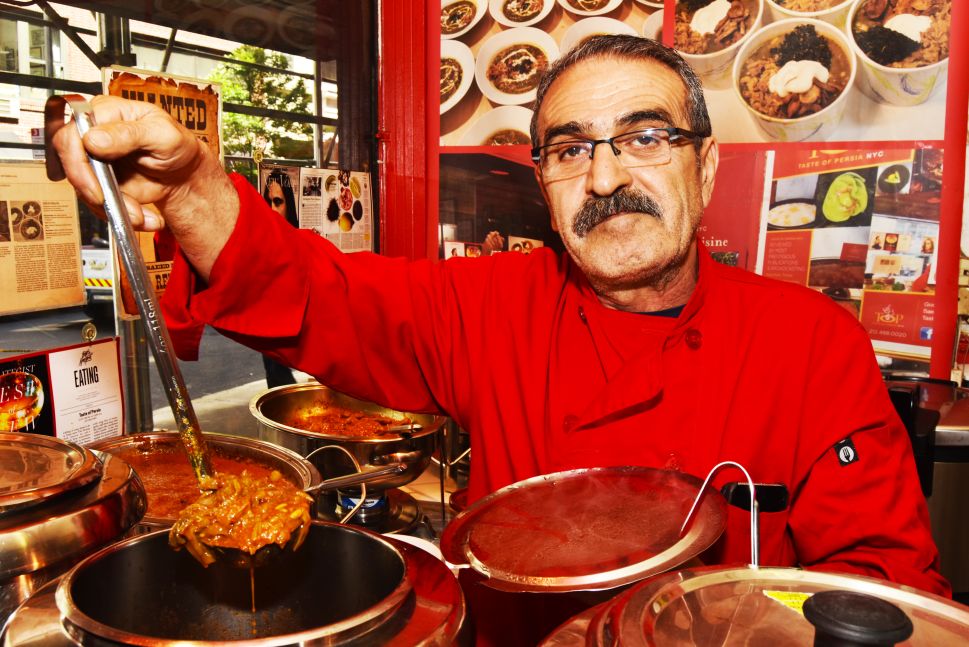