When Tom Szaky decided to become an entrepreneur at the age of 19, he picked something that most people in that “dot-com” era would probably have called a very unattractive business: waste management. For the past 16 years, Szaky’s company, Trenton, N.J.-based TerraCycle, has specialized in recycling hard-to-recycle materials, such as cigarette butts and dirty diapers, and has remained a little-known name to the wider public outside of the recycling industry.

But this spring, TerraCycle entered the mainstream spotlight after it launched a new program in partnership with a roster of major consumer brands—including Kroger, Nestle and Haagen-Dazs, among others—that could forever change the way consumers create waste in the first place.

The program, named Loop, aims to solve the waste problem at its root cause—by eliminating the disposable packaging that comes with most of the things we buy at grocery stores. Instead, Loop members sell these everyday products in reusable containers and charge consumers a deposit to encourage them to send empties back. Loop, then, is responsible for cleaning the containers and sending them back to brands for reuse.

At first impression, this recreation of the traditional “milkman” model sounds expensive to brands (making a stainless steel Haagen-Dazs container seems a lot more costly than making even a stack of single-use paper cartons) and a bit cumbersome to consumers. But Szaky said the math actually works out for all parties.

“Let’s say you are buying a Loop shampoo in a reusable, aluminum bottle. In addition to the shampoo itself, the price includes the depreciation of your durable bottle plus the cost of cleaning. After the deposit, the cost actually becomes very similar to what you’d pay for the same shampoo in a disposable plastic bottle,” he explained to Observer during an interview last week.

“With durable [containers], you also get a lot more benefits,” he added. “The packaging is more beautiful. It has more functions. It does more than a normal package does.”

Nevertheless, that “similar price” promise doesn’t apply to all categories of Loop products just yet, and some early adopters of the zero-waste program have found the prices for some goods a bit difficult to swallow, even after the container deposits.

Szaky acknowledged the concern, but said prices would eventually go down, once Loop achieves its economy of scale.

“I mean, we just launched Kroger three weeks ago. Right now, being small, it’s simply less efficient than the big disposable factories. Most of our partners are actually subsidizing money into these products to keep price more normalized,” he said. “As we get our scale, the price will get close to the same [as disposable packaging]. We have two big priorities right now in Loop—one is to add as many products as possible, and the second is to reduce the price as much as possible.”

In the U.S., more than 40 consumer brands have joined the Loop program, and a new brand signs up every two days. Szaky said the appeal, along with the plastic straw bans adopted by fast food chains and plastic bag bans across U.S. cities recently, was spurred by a sudden rise in public awareness about the global “garbage crisis” in the past year.

“Garbage has always been a problem; no one has ever said garbage was a good thing, you know. But in the past 12 months, it has become a crisis,” he said. “There was this simple but very emotional communication coming up on social media, like the viral pictures of the fish with plastic bags in their stomachs and the sea turtle with a straw in its nose. Consumers have started talking about how angry they are about this. Politicians and companies are seeing this, and they’re trying to get ahead of it.”

Toward the end of our interview I asked Szaky whether he had a business card that I could keep, just in case. He pulled out an avocado-sized stamp thingy out of his giant backpack, aimed for my notepad and, before I knew it, inked his contact information right under all the notes I’d just taken—perfectly loss-proof and waste-free. 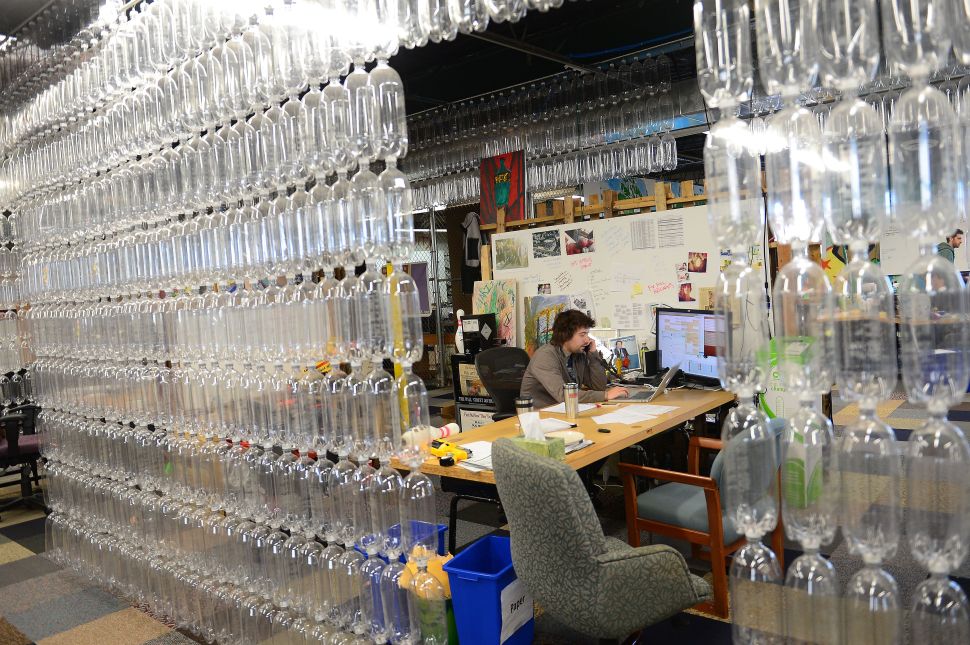