Talk about spreading your brand: In Texas, a ‘Save Chick-fil-A’ bill was passed into law on Tuesday by Governor Greg Abbott. The bill will protect private entities, such as fast food giant Chick-fil-A, if they support and donate money to anti-LGBTQ groups that openly oppose gay marriage.

Chick-fil-A President Dan Cathy has stated: “I pray God’s mercy on our generation that has such a prideful, arrogant attitude to think that we have the audacity to try to redefine what marriage is about.”

Hey, Cathy. Just make me a spicy chicken sandwich—and keep your 1899-era opinions to yourself.

Senate Bill 1978 was created after Chick-fil-A was blocked from opening up a restaurant at the San Antonio International Airport due to the donations the chain contributes to groups such as Fellowship of Christian Athletes, which bans “homosexual acts” and The Salvation Army, which opposes same-sex marriage.

But, apparently, Texas Republican lawmakers like smokehouse BBQ bacon sandwiches more than LGBTQ people because the bill they passed will also bar a state government agency from punishing a company for supporting or donating to religious organizations, including anti-LGBTQ groups—now making it the perfect fast food chain for the MAGA generation.

State Rep. Celia Israel told The Texas Tribune: “It’s been cloaked in religious freedom, but the genesis, the nexus of this bill, is in hatred.”

Chick-fil-A is headquartered outside Atlanta, Georgia. The company’s ultra-conservative religious values were influenced by it late founder S. Truett Cathy, who was a devout Southern Baptist; in fact, all Chick-fil-A restaurants are closed on Sundays.

Chick-fil-A is not the first religious fast food chain. Look at In-N-Out Burger—the West Coast fast food chain hides Bible quotes on their food’s wrappers and packaging. These tiny biblical quotes are placed in obscure spots, on the undersides of cups and near the seams of the paper burger pouches. For example, the wrapper on In-N-Out Burger’s “Double-Double” trumpets Nahum 1:7—”The Lord is good, a strong hold in the day of trouble; and he knoweth them that trust in him.”

Though critics fear that the ‘Save Chick-fil-A’ bill will lead to discrimination from employees refusing to serve same-sex couples, at least Chick-fil-A’s branding doesn’t openly show the company’s hatred towards minorities like some other restaurants.

There was once a restaurant chain called: Sambo’s. (This already sounds like it’s not going to end well.) At one time, there were 1,117 Sambo’s restaurants in 47 states. The chain was (supposedly) not directly named after the 1899 children’s book, The Story of Little Black Sambo; but its restaurant mascot, which was supposed to be a dark-skinned Indian boy, was seen as a black stereotype, while the name was also clearly a racial slur.

Sounds like the perfect place to indulge in some pancakes after an exhausting Unite the Right rally.

The first Sambo’s opened its doors on June 17, 1957, during the height of Jim Crow America. So connect the dots… and you tell me if the logo, mascot and name were intentionally racist.

But there’s no denying the intent of such restaurants, diners and cafes largely found in the South with gratuitous Ks added to their names to round out a sinister trio of KKK—such as Koffee Kup Kafe, Kathy’s Kountry Korner and Kozy Kitchen Korner.

Many of these establishments were opened during Jim Crow America along Route 66. Very little innuendo was to be had that Kozy Kottage Kamp and Klean Kountry Kottages, blazoned with bold KKK capital letters, catered to whites only—considering their branding was code for the Ku Klux Klan. These establishments wanted to subtly (or not subtly) trumpet the fact that they were associated with the KKK.

Some of these establishments are still around to this day, such as Koffee Kup Kafe in Hico, Texas—which, despite changing its name to Koffee Kup Family Restaurant, still has a backroom that was used as a meeting ground for the Klan. According to Trip Advisor, you can get a great slice of pie at the establishment.

So, Chick-fil-A, rest safe now that there’s been passage of a bill that protects your right to oppose LGBTQ people. You now stand in line with the great legacy of Sambo’s and Koffee Kup Kafe, of mixing good eating with hateful discrimination. (In-N-Out Burger—you’re cool.) 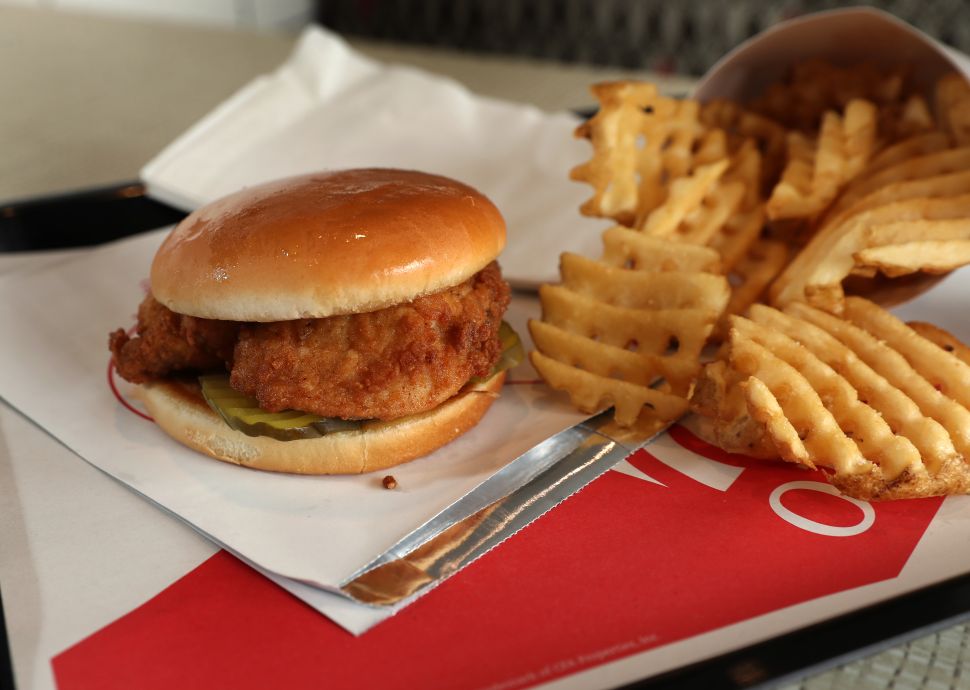