When asked to share something about herself by a friendly teacher, the lead character in director Lila Avilés’ film festival favorite can only muster the basics. “My name is Eve,” she says. When pushed, she adds, “I am 24 years old and I am a hotel maid.”

At that juncture of The Chambermaid (La Camarista), we know a little more than that about Eve, brought to life with bristling sensitivity and dormant rage by Mexican actress Gabriela Cartol.

She has son named Reuben whom she almost never sees. When she cleans a room, she sometimes assess the garbage in the waste bin of rich guests who stay in the Mexico City high rise hotel where she works, like an archeologist puzzling over the remnants of a culture they will never know firsthand. She showers at work because at home she has no running .

Eve is one of the most fully and forcefully crafted characters I have seen on screen in some time. Yet to herself, her fellow workers, hotel guests and society at large, she is a maid and nothing more. Her position and all that it demands of her (“hurry up and work hard,” she is told by a supervisor) has made imagining herself as anything more almost impossible.

But she is trying, and the modulated and respectful way Avilés—an actor and dramatist making her feature film directorial debut—captures those efforts is extremely moving.

Eve is taking a GED class her union has set up, and following the lead of the bibliophile that runs the service elevator, has taken to reading her first book: a tattered copy of Jonathan Livingston Seagull. She longs to take home a red dress that was left behind in one of the rooms she cleans, but where would she wear it?

Most of her dreams are trapped within the hermetically sealed tower in which she spends all but a few moments of the film. She cleans the 21st floor and wishes she could work the newly refurbished 42nd, with its wood paneled walls and infinity pool. Unlike many women who work in housekeeping and as domestics (a good primer on the subject is Pierrette Hondagneu-Sotelo’s 2007 book Domestica: Immigrant Workers Cleaning and Caring in the Shadows of Affluence), Eve doesn’t have a social network of friends to lean on. Even her intimate relationship with a window washer develops without the two ever touching or even conversing.

It is difficult to resist comparing The Chambermaid to Alfonso Cuarón’s Roma. But while that film was epic in its scope and presented its lead character in a heroic manner, Avilés’ film is small in scale and wishes not to aggrandize Eve but simply give her an opportunity to exist on her own terms. There is also nothing showy about her approach. Her camera almost never moves; instead, she and cinematographer Carlos F. Rossini illustrate Eve’s isolation through dramatic use of rack focus.

Two high-powered performances ably support Cartol’s nuanced portrayal—both from characters whose worlds she orbits but never completely enters. Minitoy (Teresa Sanchez) is a fellow maid whose bubbly ebullience makes her the social center of the lunchroom, and perhaps starts to rub off on the somber Eve. As a rich Argentinian guest and fellow mom, Agustina Quinci is the very picture of the blissfully detached bourgeoisie; she acts as if by loaning Eve the coconut oil she rubs on her gums, somehow it will counter the crippling poverty that defines her life.

Unless you count the speed and precision with which Eve assesses and then cleans a trashed hotel room, there isn’t much overt action in The Chambermaid. But that doesn’t mean the movie, which played to much acclaim in dozens of film festivals around the world, isn’t dynamic or doesn’t build toward a satisfying denouement.

Like the metropolis that sprawls out far below the rooms she cleans, the film quietly pulses with life. And like Eve, we are left hoping she has a larger part to play in that world beyond smoothing blankets and folding toilet paper ends into perfect little triangles. 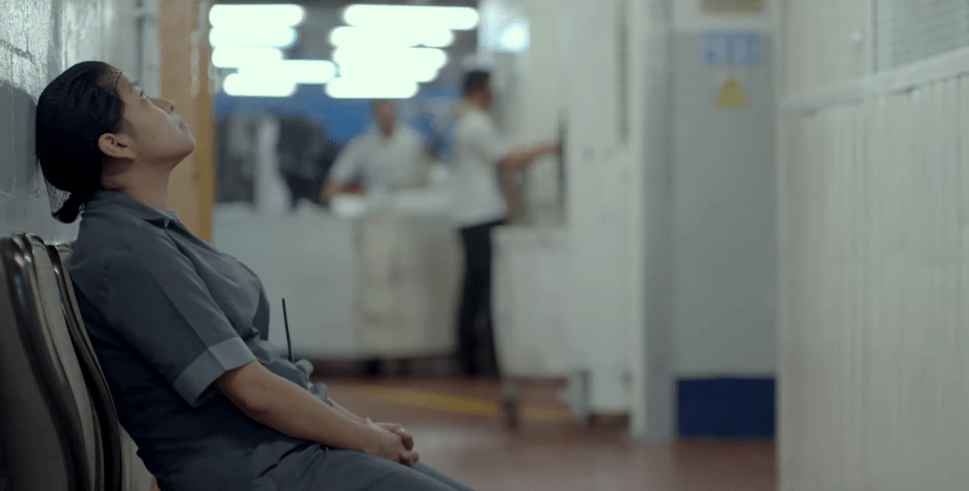