Dementedly written, and directed as though it was under the influence of something stronger than cough syrup, by someone named Michael Melski, it begins with a harrowing childbirth scene, a mother savagely murdered, and a newborn infant stuffed into a wooden box and buried alive. Cut to a house in the rural ruins of Nova Scotia, where a couple named Rae and Liam check into a secluded guest house called the Mersey Inn run by an overly solicitous Mrs. Leeds (Shelley Thompson).

Rae (the excellent Suzanne Clément) is a crime reporter with a history of mental illness, and her husband Liam (Allan Hawco) is a wannabe musician who resents a wife with money provided by her rich adoptive parents. It is Rae’s 42nd birthday weekend. She is also three months pregnant. It’s not long before they start hearing music and ghostly whispers in the middle of the night and Rae experiences hallucinations and scary images that threaten to bring back her old nervous breakdown.

Mrs. Leeds tells them the inn once served as the maternity ward of an old orphan asylum where mothers and babies were massacred in a series of gruesome homicides. Time to start the ignition and drive away, of course, but nothing that logical ever occurs to Rae, who begins her own investigation of the asylum’s history. Amid charming hooked rugs, antique furniture and discarded dolls, the heebie-jeebies set in.

Suddenly, the film turns loopy. Liam finds in the registry the signature of his dead first wife, who apparently visited the inn with him years earlier, without Rae’s knowledge. Rae finds decaying journals written in lemon juice (huh?) that disappears until the pages are held up to the light. Are the increasing images of blood-soaked corpses ripped from their mothers’ wombs and bashed against the wall the result of a haunted house, or just Rae’s self-induced lunacy?

Anxiety and fear are exacerbated by the arrival of lightning and thunder storms, but not before Liam loses it completely, Mrs. Leeds chuckles like a maniac, and Rae comes face to face with real horror, especially when she discovers she was one of the babies born there, 42 years ago.

Creepily photographed in dense thickets and foggy forests that equal the moors in Wuthering Heights, the movie is comprised mainly of contrived images that make no sense. By the time Mrs. Leeds crosses over to the world of the insane and takes Liam with her, whatever believable connections the secrets of the graveyard behind the inn and the disintegration of Rae’s mind have to do with the popular Nova Scotia legend of the “butterbox babies” are abandoned in favor of rampant, uncontrollable silliness masquerading as horror. 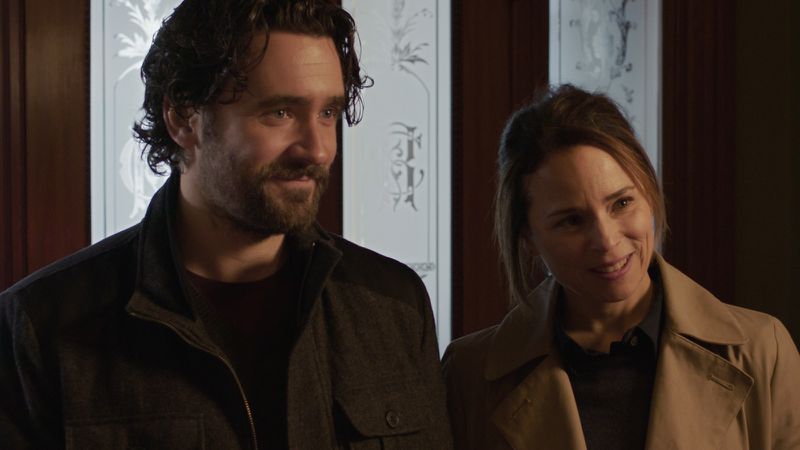