Since it’s the title of a bestselling novel, a Hollywood movie, and now a high-profile musical, one must ask: What exactly is The Secret Life of Bees? The character August Boatwright (LaChanze), eldest of three sisters who live in the rural South manufacturing honey, explains it thus: “It’s a symphony of wings / In a thousand different keys / Mysterious and wonderful / The secret life of bees.” Huh. OK. Anything else? “Gather nectar / Bring it home / Make the honey / Fill the comb / Do your work / Die with grace/ It has a rhythm and a pace.” This sounds more like the social life of our apian subjects, industrious drones working hard in the service of a queen—and that hasn’t been a secret since the ancient Egyptians.

Perhaps I’m overthinking it. Honey, hives and so forth—it’s all just a relatable, not very airtight metaphor for a story meant to resonate less in the head and more in the heart. And while this handsomely produced and sensitively acted musical—with a book by Lynn Nottage, lyrics by Susan Birkenhead, and a rich, soulful score by Duncan Sheik—has flashes of religious ecstasy, young love and forgiveness, mostly it produces too much treacle and too little sting. Despite the serious talent arrayed on both sides of the footlights, one longs for the mystical rapture its characters seem to feel when baptizing the wooden icon of a black Madonna in fresh honey.

Set in South Carolina in 1964, just after the Civil Rights Act is passed, the story follows the moody, teenaged Lily (Elizabeth Teeter), still scarred by dim memories of her mother’s death by gunshot when she was just a toddler. Lily lives with her emotionally stunted, abusive father, T. Ray (Manoel Felciano), prone to cruel commands such as making the girl kneel on grits to pray (Teeter’s kneecaps are red and raw for most of the first act). Offering gestures of maternal tenderness is Rosaleen (Saycon Sengbloh), Lily and T. Ray’s strong-willed, also motherless maid. After Rosaleen is brutally beaten as she walks with Lily to register to vote, the white girl resolves to leave her hateful, spirit-crushing town. Where to go? Lily finds a postcard among her mother’s effects beneath a floorboard: a postcard with a black Virgin Mary, and on the back scrawled the name of a town: Tiburon. In short order, Lily springs Rosaleen from jail (I’m not sure how) and they hit the road.

What they find in Tiburon is the home of the aforementioned three beekeeping sisters. Besides LaChanze’s August, that includes May (Anastacia McCleskey) and June (Eisa Davis). May is fretful and easily depressed; we learn she never recovered after a twin sister committed suicide following a racist humiliation. June, who plays cello, is tougher and prideful, unable to commit to a schoolteacher (Nathaniel Stampley) whom she loves and who loves her. Of the siblings, only August seems to have found peace and stability—and that has come through (you guessed it) tending bees. More than just a sustainable business model, the Boatwright sisters seem to have created a local religious movement, organized around a slab of driftwood that has been carved into a Virgin Mary. The holy statue figures into rituals in which the faithful dance, pray, and lay their hands upon Mary’s breast for a blessing. With Lily and Rosaleen her guests for an open-ended stay, August teaches Lily the ins and outs of smoking bees, collecting honey, and most importantly, sending love to the insects, so you don’t get stung.

Book writer Nottage follows the outline of the story, gently nudging the focus when possible away from Lily and onto Rosaleen. One of the big challenges, the creative team and most of the audience has to know, is falling into the trap of creating yet another story in which a troubled Southern girl is healed by the love of selfless black women: The Help Conundrum. Sengbloh is a deeply affecting and sympathetic performer, and she makes Rosaleen’s journey from battered victim to a contented member of the Boatwright circle a quiet joy to watch. But the story, inevitably, belongs to Lily and her search for the truth about her dead mother (who had a history with August). The second-act plot reaches its greatest tension when Lily is discovered one night in a car with the African American teen Zachary (Brett Gray), who also helps August tend the bees. Whether or not the boy and girl might have embarked upon an affair, the brutal entrance of racist cops tips the story toward possible tragedy.

Sheik’s score—a skillful blend of funk, gospel, rock ‘n’ roll and African polyrhythms—is probably his best and freshest since Spring Awakening. And while Birkenhead’s lyrics sometimes skew toward the twee, they’re generally forthright and affecting. Nottage’s storytelling instincts are, as usual, solid. Teeter’s Lily is appealing, Gray is pure, smooth charisma and the huge-voiced LaChanze radiates kindness and wisdom from every pore. So why don’t I love this musical? Two reasons. First, in this iteration, the material does not ultimately sing. Kidd’s 2002 novel would have made a fine full-length play, where a dramatist could use their full arsenal of tricks to convey the narrative, contextualize history, weave in the themes and maybe even justify that “secret life” business. For all the musical pleasure in Sheik and Birkenhead’s songs, they don’t mesh closely enough with Nottage’s book to feel like they’re pushing the story or emotional terrain along. Single numbers, such as Zachary’s cruising-in-my-car rocker “Fifty-Five Fairline” or the sisterhood rallying anthem “Hold This House Together” are powerful moments, but they don’t add up to a cohesive, propulsive musical drama. The mystical elements that do “sing”—the Mary statue, the bees—just feel like New Age window dressing. Taken together, the show feels generic and lamely manipulative.

The second problem is Sam Gold’s direction. Gold has shown a tendency to reign in showbiz flash when he directs musicals. Such a tamping-down approach works with material about repression, such as the brainy, stealth tearjerker Fun Home. But Secret Life of Bees needs a liberating touch, a director to bring out the extremes of pain and joy more fully and unguardedly, to make us marvel at the natural and feel the presence of the supernatural. The production at the Atlantic Theater Company is neat and logical when it should be messy and messianic, ripping your heart out and reaching beyond the social and psychological for something more primal and archetypal. (For all that and more, see another musical set in the South in the’60s, Caroline, or Change.) There are many themes flying around this worthy but underwhelming piece—racism, feminist collectives, trauma, religious ritual, choosing your family. But if you can’t organize those elements in a coherent structure, they’re never going to make honey. 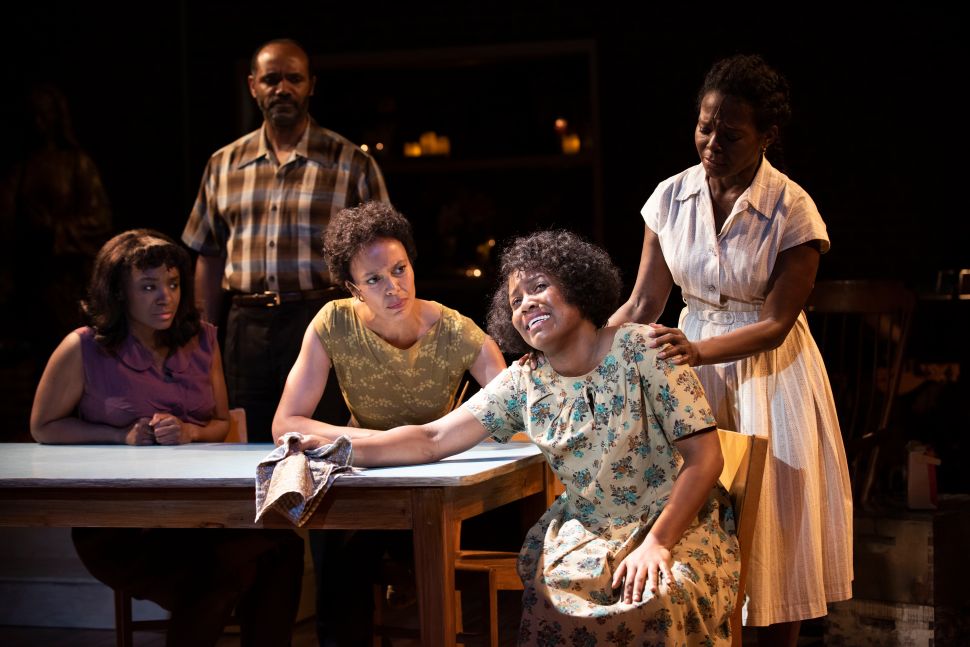