The imagery of Trump’s dinner at Buckingham Palace, earlier this week, looked like a trailer for an upcoming documentary about the Illuminati. This was the pinnacle moment in the life of a man who has his very own gold toilet—and embraces the world of “classy.”

Trump finally got the attention of the Royal Family that he’s been so wanting for decades.

Though, from an outsider’s perspective, the state banquet with Queen Elizabeth II also reminded me of something you’d see in the 1991 John Goodman fish-out-of- comedy, King Ralph.

Trump has a long history of seeking royal approval. For decades, he’s tried to link himself to the royals with the assistance of “fake news.” No, I’m not talking about what Trump refers to as the mainstream media—but actual “fake news,”—with Trump, himself, actually planting fake news stories in New York tabloids. Between 1981 and 1995, Trump reportedly planted at least five stories that alleged members of the British royal family were considering moving into his “classy” properties.

At the time, I guess, it might have made sense to the general public that Trump would rub elbows with the royals. Trump was “classy.” The royals were “classy.” Why wouldn’t the bloodline to the throne of England want to move into a building with gold Trump letters blazoned on the outside?

In 1981, Trump allegedly fueled gossip that Prince Charles and his new bride, Princess Diana, were planning to purchase a $5 million condo in Trump Tower. When a reporter called him about the self-perpetuated rumor, Trump responded by saying, he could not confirm or deny it. At the time, though, Buckingham Palace did confirm that this transaction was completely false.

Trump also claimed, in 1994, that Charles and Di had sent him a $50,000 check to become charter members of Mar-a-Lago in Florida, to which a palace spokesman retorted that the proposition was “complete nonsense.”

In 1996, once Charles was out of the picture, Trump also pursued the newly divorced Diana. In a gesture of pure stalker creepiness, Trump reportedly sent a blitz of flower bouquets to Di at Kensington Palace. (He must’ve seen her as the ultimate trophy wife.) “What am I going to do?” Diana told a friend, according to Britain’s Sunday Times. “He gives me the creeps.”

In 1997, when Diana died in a car crash in Paris, Trump reportedly told friends that his biggest regret was that they hadn’t dated. Maybe that was the reason why in 2005, Prince Charles snubbed Trump’s invitation to his wedding with Melania.

For the most part, Trump has used lies about the royals to benefit his pocketbook, add prestige to his tacky brand and publicize his properties. Classy! 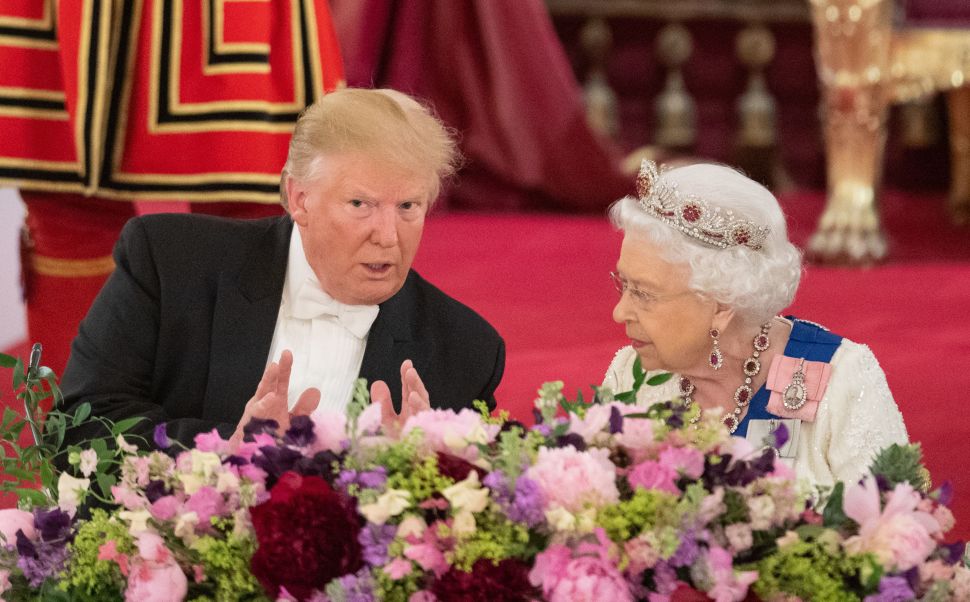