As we quickly approach the 50th edition of Art Basel, with the Venice Biennale in full swing, this year’s edition of the Swiss fair promises a lot of overlap with the artists showing in Italy. Of the 290 galleries participating in Basel, which opens to the public on June 13, it is unsurprising that many of them who rep Venice’s standouts have decided to capitalize on that success. We’ll be seeing a lot of similar iterations of the most politically charged works we saw at Venice, warming this year’s Art Basel up to be one of the strongest yet.

Two artists destabilizing our understood boundaries between the human and non-human are Anicka Yi and Ian Cheng. Yi’s body of work anticipates a future controlled by big pharma, where sensory experience can be fully mapped and where artificial intelligence evolves into synthesized animal-plant-human-machine hybrids. The large, kelp-based glowing bulbs she presents at the 58th International Art Exhibition, Biologizing the Machine (tentacular trouble), 2019, bring the audience back to the origin of human life: . At Art Basel, Yi’s dystopian vision of the future is presented by Gladstone and 47 Canal, where another iteration of her biomorphic forms hanging from the ceiling warn of the possibility of a future in which humanity has eroded itself.

Ian Cheng’s self-coined “live simulations” more aggressively lend agency to artificial intelligence in appealing to our fears of an uncertain future. At the Giardini in Venice, a branching serpent by the name of BOB (Bag of Beliefs), 2018-2019, driven by a series of algorithms that can be influenced by the audience, interacts with objects and with the person at the helm. Cheng’s piece at Basel, on view at Pilar Corrias’ booth, is a continuation of his Venice life form. The comic-like installation titled Life After BOB (First Tract), 2019, traces the self-evolving, eventually autonomous life that BOB could take on—another suggestion of the possibility of humanity co-existing with mature forms of A.I. in the near future.

At Esther Schipper, two wildly popular artists from Venice are on view. Strikingly different to her Biennale virtual-reality piece, Enodrome, and the large-scale installations she is best known for, Dominique Gonzalez-Foerster’s piece La Loge (Numéro Rouge), takes the form of a series of photographs from her ongoing “Apparitions” series. Amidst the “self-portraits” featuring the artist disguised as iconic figures from Marilyn Monroe to Edgar Allan Poe is a red-tinted mirror showing the viewer’s own reflection.

Also on view at the booth is a piece by Hito Steyerl, whose pseudo-didactic video works have been quietly eroding the documentary genre for the past decade. Her multi-screen installation in the Giardini’s main pavilion, through an A.I.-generated simulation of Venice’s waterways and palazzos, uses a gentle voice to call out one of the world’s biggest weapons companies for appropriating Leonardo da Vinci’s name. Her Basel piece, After the Crash, 2009, part of the film trilogy Free Fall, instead focuses on a small airport in California used as an aircraft wrecking yard. Documentary footage is intertwined with the voice of the owner of the yard so that the images of the plane crash become symbols of the current economic crisis and the stock market crash.

Mumbai-based Shilpa Gupta was one of only three Indian artists selected to be part of this Biennale’s main exhibition. One of the two pieces she presented, “For In Your Tongue, I Cannot Fit: 100 Jailed Poets, 2017-2018, gathers the words of 100 people who have been jailed for political or artistic expression to explore how language has historically been used as a tool of power. The Shilpa Gupta piece that will be on view at Chemould Prescott Road’s booth is part of that ongoing body of work exploring surveillance, boundaries and the fragility of freedom of expression today. At Basel, A liquid, the mouth froze, 2018, comprises a cast of human mouth in gun-metal, a material whose violent nature evokes the ways in which societal restrictions have sought to clamp the imagination. Her work will also be shown at Basel by Continua.

And naturally, as any art fair these days would be incomplete without a piece by Laure Prouvost, works by the French provocateur will go on view at Nathalie Obadia, Carlier Gebauer and Lisson. Prouvost, whose installation tracing the journey from Paris to Venice at the French Pavilion was a sensation, brings a similar iteration to Art Basel with humorous, idiosyncratic pieces addressing borders, limitations and things getting lost in translation. At Nathalie Obadia’s booth, Prouvost’s obsession with language manifests in two tapestries, The Marble of the Grand Hall, 2017, and Monteverde Ici – Deeply, Feeling Filing the World, 2018. The oil painting also on view at Nathalie Obadia, IDEALLY THIS SIGN WOULD TAKE YOU AWAY FROM HERE, 2016, converses with a similar work being shown at Lisson, IDEALLY THE FLOOR WOULD BE SOFT HERE, 2016. That isn’t to say we are any closer to figuring out the meaning of either, but it’s nice to see the artist’s subversion of words and images play off of one another.

Other Venice artists showing works at Basel include Golden Lion recipients Jimmie Durham (for Lifetime Achievement) and Arthur Jafa (for best participant in the central exhibition). Jos de Gruyter and Harald Thys, whose works occupy the wildly lauded Belgium Pavilion, are also on view, as is Mawande Ka Zenzile, one of the three artists representing South Africa at the central exhibition, and filmmaker Lawrence Abu Hamdan, one of the recently announced Turner Prize nominees. 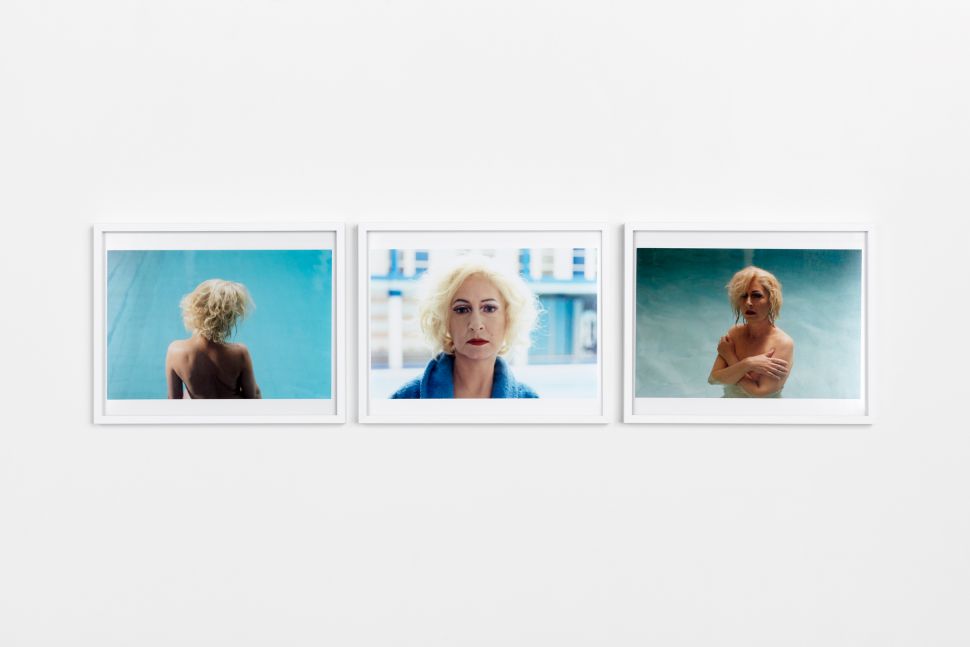