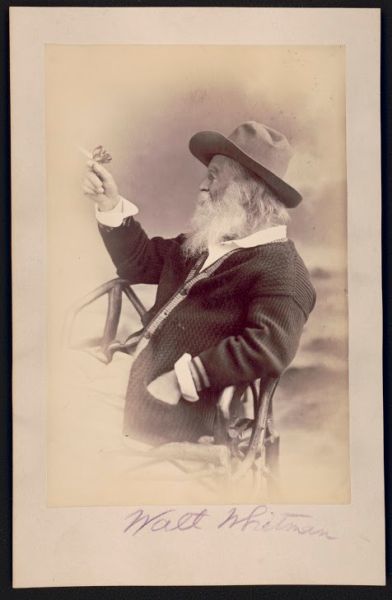 Every era remakes Walt Whitman in its own image. Critical responses to Whitman’s poetry, and life, have always varied in their praises and damnings, but much of the public loves him and always has—he’s the clever, sometimes mischievous and often flirty grandpa of American literature.

For the mystics and Theosophists of the early 20th century, Whitman was a kind of rough, woodsy magician, a man seeing, and recording, the inter-connectedness of all things and resonating with subsequent joy. For the Beatniks, Whitman represented freedom and nonconformity, for the Hippies, Whitman was a troubadour high on love, which he saw everywhere. In the ’80s and ’90s, Whitman’s work, and the man himself, became an important symbol in the reclaiming of queer (and other outsider) histories. And as we have continued to reconsider his legacy, Americans have been trying to grapple with this figure’s flaws as well; his racism has become more widely explored, acknowledged as something that can’t be ignored or pushed aside in favor of an idealized portrait of the poet.

A new exhibition at the Morgan Library celebrating the 200th anniversary of his birth (open June 7) brings together a selection of Whitman’s drafts, ephemera, correspondence and photos as well as corresponding archival material from poets and intellectuals inspired by Whitman, a curatorial choice unusual for this sort of archival celebration. By putting Whitman and his works “in dialogue” with artists who thrived long after Whitman’s death, the exhibition not only speaks of Whitman’s influence, but also of the urgency underneath Whitman’s happy wanderer persona, which is largely what continues to draw artists and admirers to him today. 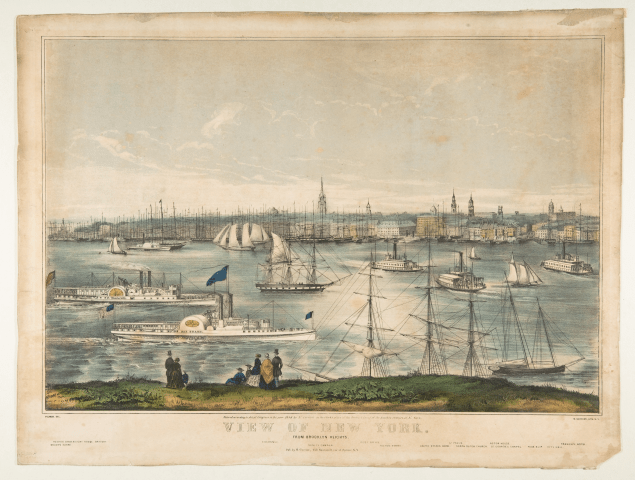 When Whitman turned his eye toward a topic, he wrote about it with love—but not blind love. He was a keen observer of the merciless and never-ceasing hunger of American industrialization, the ferocity of U.S. politics—his poem “O Captain! My Captain!, an elegy for Abraham Lincoln, is so full of anxiety over the state of American affairs that it could break any politically anxious heart today—and of course, the subject that got him in trouble throughout his life, casual gay sex. Whitman was hardly a pornographer, but he wrote frankly about male comradeship and intimacy and proposed that a freeing of the sexual body would lead to a freeing of the political and social body. In essence, Whitman saw that the future was queer.

Contemporary visitors to the Morgan will see a Whitman presented in fragments and tangential pieces, which is exactly the way one suspects Whitman would have wanted it. He was a restless artist, capable of many and contradictory sympathies. “I am large, I contain multitudes,” as he famously put it. And what is that but a succinct, haiku-like description of post-modernism’s stubborn inexactness, of the plurality of voices and personas we all now use and inhabit? Whitman would have loved the digital age, both for its fractious tone as well as the ceaseless information noise—because he would have seen that noise is only a byproduct, information industry waste, of the marvelous fact that we are now quite literally at each other’s fingertips. 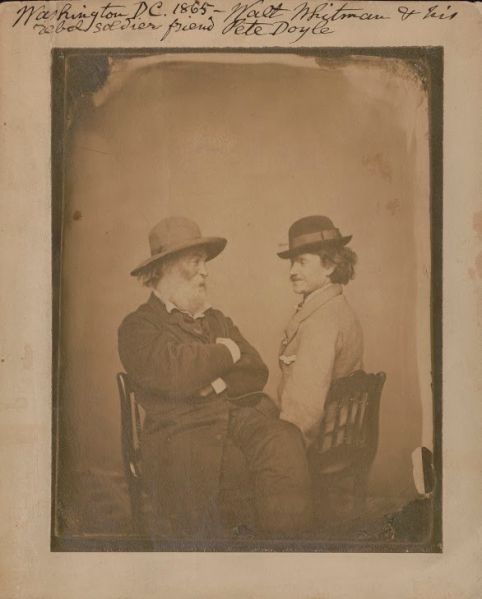 Looking at photos of Whitman with today’s eyes, it’s hard not to see what a gay archetype the man was—handsome and decidedly male, but with a fruity playfulness, a hands-on-hips sass. Even his handwriting, easily legible yet tilting, firm and clear yet decorative and flouncy, speaks of a man fully at ease with his feminine side; perhaps to the point of cultivation. One wonders if the paper smells of lavender or coal dust, or both.

Whitman’s early, best-known book, Leaves of Grass, was also, in a fashion, his last book. In between first self-publishing the poems and the last edition printed during Whitman’s lifetime, Whitman added new many works to Leaves of Grass. He broke away from his opus to publish everything from a fitness manual to war journalism, but always come back with more poems—poems inspired by everything from the horrors of the American Civil War to the wonder of mighty new machines, and of course new loves. This practice of perpetually revisiting and reworking a text is key to understanding Whitman’s relevance today. 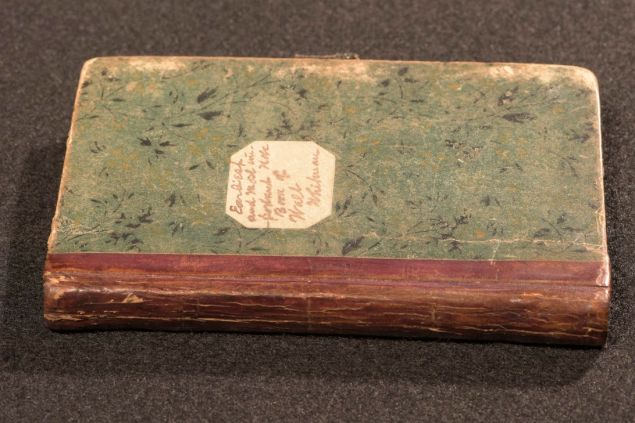 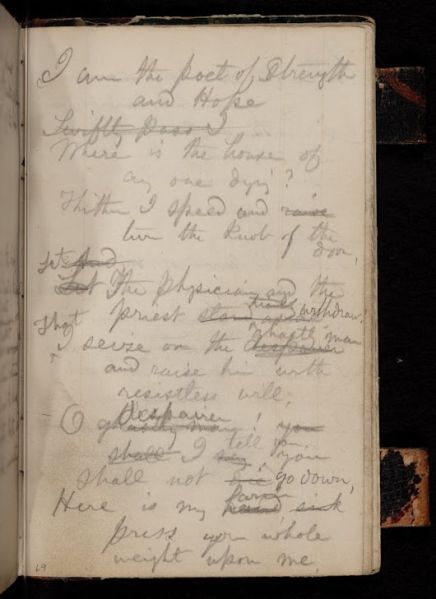 Although revising works for new publication was a common practice for authors at the time, Whitman was not so much rewriting his poems as he was re-contextualizing them by the addition of new poems. He amended and expanded Leaves of Grass constantly, not out of dissatisfaction but out of distrust of completion, of finality, and because he understood he lived in rapidly changing times.

In a sense, Whitman developed what we would now call an immersive, relational aesthetic, a practice you can see coming into maturity via the documentation assembled by the Morgan. Poets of Whitman’s era were applauded for stepping back from reality to offer an abstracted, Olympian perspective on their times and troubles.

But Whitman walked right up to the world and wrote what he witnessed from the ground up, all the time keenly aware of, and remarking on, his own prejudices and enthusiasms. But he was far from perfect. Whitman was always rooted in his era, good and bad. He was a rough, ready and flawed.

Whitman’s legacy, as curator Sal Robinson puts it, is that his poems ask readers “to imagine ourselves into other bodies and to feel that their experiences are just as real to us as our own.” By de-centring himself and his voice, and remaining fluid in his practice, Whitman got an early start on our century long movement away from art, and readings of art, that position the artist as ultimate authority. 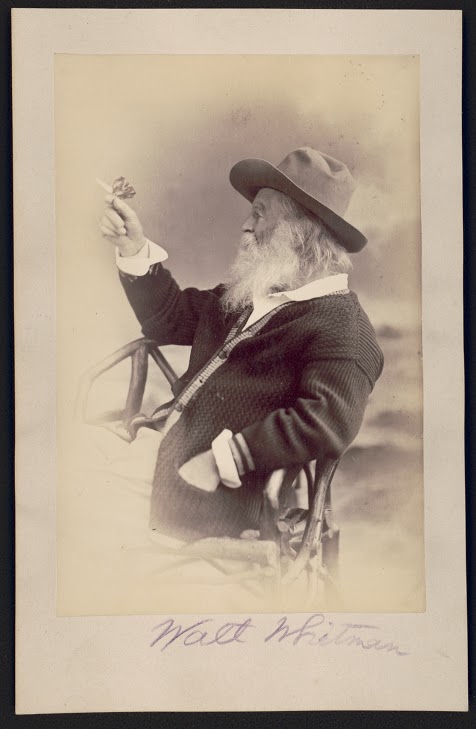