Jane Eyre and Twyla Tharp have very little in common, except that both of them were featured in the latter weeks of the ABT season, just ended. Who do you think came off better? Not Jane. In England, the story ballets of Cathy Marston are a big deal—as if the world had been crying out for Masterpiece Theater on pointe. Let’s pray that the infection won’t spread too widely on our shores, although I’m not sure prayer will do the trick—there are too many artistic directors out there hoping to strike gold with full-evening ballets.

Poor Jane Eyre—hasn’t she suffered enough? Apparently not. Marston has reduced Charlotte Brontë’s thrilling novel to an endless shaggy-governess story that’s about nothing but getting through the complicated plot and hoping the audience can follow along. As it happens, I know the book fairly well, and yet was stumped by the frantically rushed opening scenes: I should have read the synopsis, not the novel. Marston has crammed everything in—except the passion, the febrile intensity, the romantic charge. I’m prepared to believe that’s she’s made more narrative sense out of Ghosts, Lady Chatterley’s Lover, Lolita (!) than she’s made of Jane Eyre, but I’ll never believe she has serious choreographic skills. I couldn’t identify a single interesting step—or moment—in the entire mishmash. Waiter, please take this away….

The Twyla show was a welcome retrospective—and a hit!—but I’d rather have seen something new and maybe less safe from her. Her Brahms-Haydn Variations is a successful classical ballet, and the company can handle it, but why not her more daring and challenging Bach Partita? In the Upper Room is thrilling always, but this time round it was looking a little tentative—there’s an armada of excellent dancers up on the stage, but not the go-for-beyond-broke stars of yesteryear. By the end of the week, everyone had settled in, and Upper Room was looking more like its old self.

The big novelty was Deuce Coupe, taken into ABT 46 years—yes, 46 years—after it first erupted into our world when Tharp invaded the Joffrey with her brilliant Tharpists and the Beach Boys. Back then it was revolutionary—a cutting-edge encounter of modern, pop and ballet. It can’t have the same impact today, because we’ve absorbed it; and since all ABT’s dancers are classically trained, there isn’t the disparity in styles there once was. To my taste, Deuce Coupe is a little too long and over-determined, but the audience loved every moment of it. They loved the whole evening. They love Twyla. And Twyla, taking a bow in response to the ovation, seemed to love them back.

Le Corsaire was its usual rowdy, ridiculous self. Particularly satisfying was Sarah Lane’s Gulnare—her strong, precise dancing is a great pleasure to behold. The rampant guys fling themselves around, the captured girls huddle, the Pasha is as fat and befuddled as ever, and the vision scene is one of Petipa’s gems. You either enjoy Le Corsaire or you don’t—I always do, and did so with extra relish this year since it helped erase memories of Jane Eyre.

As for Kevin McKenzie’s version of Swan Lake, it’s as clumsy and irritating as ever—but he’s the boss. I went to see Christine Shevchenko in it since she has an impressive vitality to her, but her Odette was a disappointment—not very affecting, not very effective. She was much more suited to Odile, and of course she pulled off the famous fouettés perfectly as thousands cheered. Fonteyn had problems with them, Makarova had problems with them—so what? They’re competition steps, rarely artistic statements.

And, finally, Ratmansky’s Sleeping Beauty—the company’s severest test. (The full-length Beauty is any company’s severest test.) Ratmansky has succeeded in imposing a lovely uniform style on its classicism, which is presumably closer to the way dancers danced in 1890. It’s softer, more harmonious: low arabesques, more mime, passages taken on demi-pointe rather than on pointe. The production is good to look at, and the narrative flows—the company works very hard to give Ratmansky what he’s after. There are some weaknesses. The arrival of the baby Aurora in the Prologue is under-dramatized; in Act One, Aurora’s entrance to her joyous birthday celebration is not so much botched as clumsy and flat, due to the restrictions of the set; the Vision Scene is cramped, because it’s pushed too far downstage. I miss some activity and some music in the transition from the lake to the castle. Some of the costumes—particularly the men’s hats and wigs—are distracting (the Indian Prince can barely be seen beneath the monstrosity perched on his head—who cares whether it’s authentic?) These are relatively minor problems, and fixable. There’s one large problem, however, and it can’t be attributed to Ratmansky: ABT’s lack of a glorious Aurora.

There’s no female principal in the company with the all requisite qualities: beauty, freshness, charm, simplicity of manner combined with impeccable technique. No one, to put it bluntly, to love. Granted, I was branded for life by my first Aurora, Fonteyn in 1949. I hadn’t been around ballet for very long, but I recognized the sublime when I stumbled on it. (Fortunately, there’s film that confirms her greatness, and the greatness of the entire production.) The notorious Rose Adagio? Sometimes she nailed it, sometimes she wobbled, but she was always radiant. And Aurora’s radiance is essential to The Sleeping Beauty. I saw Boylston and Lane as Aurora—both of them careful, appropriate, acceptable. And then what?

There were lots of fine performances in the two casts I caught. Craig Salstein was a fabulous Carabosse—wild, demented with fury; he’s morphed from a know-it-all into an artist. Catherine Hurlin and Joo Won Ahn were winning Bluebirds—Hurlin’s on a roll. Roman Zhurbin and Tatiana Ratmansky were a superb King and Queen, and what a difference that makes! Many of the Fairy variations were lovely, the Garland Dance unfurled winningly. The mime was unabashed, even if our audience isn’t trained to read it.

They’ll learn, though, because Ratmanksy’s Sleeping Beauty is a keeper. 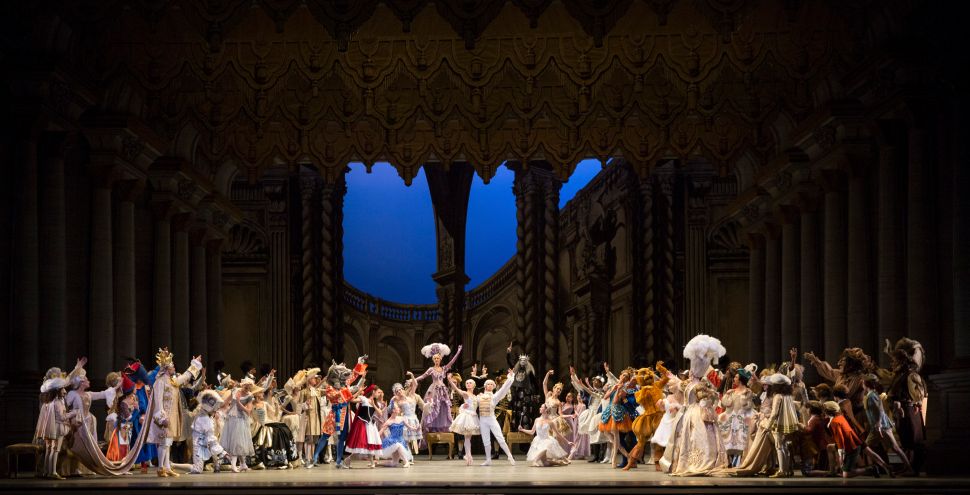