The Apple Card doesn’t really seem like a credit card. After all, Apple is not a bank. And although many Americans have a tendency to trust Apple—just look at how many of us have iPhones—a credit card is still a credit card.

Despite all of the classically stylish announcements and events to promote the Apple Card, this product is not the same as AirPods or the latest Macbook. Credit cards have real consequences, and we all know that. (Hello, credit scores!) So, although Apple’s shiny new concoction might be appealing because of its beautiful iPhone-esque interface, ease of use and security, not to mention the titanium card itself, we have to remember that the Apple Card has the same alarmingly powerful capabilities as any other credit card.

SEE ALSO: Amazon Is Offering a Credit Card to Customers With Bad Credit

Now, it’s not that the Apple Card is trying to swindle its users; as a matter of fact, I think the company is making it very easy to be responsible with a credit card. There are no fees involved: “No annual fees. No cash‑advance fees. No international fees. No over‑the‑limit or returned‑payment fees. And best of all, no hidden fees,” Apple writes on its website. Sounds more than fair.

And then, of course, there are bonuses to using the card. For example, users get daily cash back—you heard it—between one to three percent every day when using the Apple Card. Spending $2,000 at the Apple store anytime soon? Well, you’ll get $60 cash back, that day. Then, there’s the spending tracker, which is especially innovative because it uses a map to pinpoint the location of each transaction you’ve made. It also organizes your purchases into categories and creates bar graphs to explain your spending habits. Using the tools provided, it’s easier to have a “healthier financial life.”

That said, users are going to have to pay attention to Apple’s notifications and see through some of the loopholes, in order to maintain this “healthier financial life.” For example, Apple will alert users how much to pay each month in order to avoid accumulating interest, and it won’t charge late fees. But despite Apple’s kindness, interest will compound on the half or late payments, and it still gets reported to credit bureaus. Apple might allow you to not pay or miss payments, but your credit score won’t.

Senior financial counselor at NYLAG (New York Legal Assistance Group) Katie Krumpter says she is worried that users won’t make the connection between no consequences for late payments and credit still being affected. And that could be the barrier between getting that new apartment or car for which you’ve spent years saving. Is Apple going to warn its users of this? Probably not. Remember, it’s a real credit card backed by Goldman Sachs.

And the fact that it’s backed by Goldman Sachs is another reason to approach with caution. What are they getting out of this? Well, according to a report by Morgan Stanley, “the Apple Card, which we estimate will drive nearly $21 billion in loans by 2023, would alone mark a 25 percent increase in Goldman Sachs total loans over the next five years,” and it also mentioned that this would throw Goldman Sachs into the “top 10 of U.S.-based card issuers” in the same amount of time. Morgan Stanley believes this is a good move for the company, as Goldman Sachs is seeking “a more ambitious build-out of [their] consumer business.” So all in all, it seems the banking establishment will benefit from this partnership with Apple. But how is it making money? Off of credit card owners’ debts—like any other credit card issuer would.

David Solomon, CEO of Goldman Sachs, is also personally enjoying this partnership. Why? Because he loves his Apple Card, which he is currently testing, along with thousands of Apple’s employees. The media broadcasted Solomon’s ravings, and he’s right, this card is the definition of cool. How many people are going to want a titanium credit card with the Apple insignia and their name engraved on it?

Morgan Stanley found that “the Apple Card has maintained a steady level of interest above all other Apple Services,” and that in the week after Apple’s big announcement event in March, “the Apple Card saw nearly seven times as many Google searches as their other recently announced services.” Everyone is going to want this card. It’s a luxury item with a brand that maxes out the “coolness” factor.

But does Apple realize what it’s in for? By making it so easy to sign up via the iPhone, Apple is going to be flooded with Apple Card applications. And the company won’t be able to accept them all, so it will probably begin with the most credit-safe users, as well as the wealthiest ones, flashing this sleek titanium rectangle at cash registers where they probably could have used Apple Pay.

Perhaps the main reason why Apple created this card in the first place was to improve Apple Pay, the payment feature which has had low usage since its release in 2013. According to data from Digital Transactions, only 24 percent of U.S. Apple users have downloaded Apple Pay in 2019. This new card is designed for Apple Pay, adding security because the Apple Card, whether in a mobile or physical wallet, lacks its card number, expiration date and CVV. And only you can use your card in your mobile wallet. If your face is not in front of the camera, the card is defunct, thanks to Apple’s facial recognition technology. This card effectively eliminates the traditional route for stealing credit card information. (Don’t worry online shoppers, there is a safe and secure way for users to access their own card’s information through their iPhones.)

But users cannot use the card to its full secure potential without Apple Pay, and they can’t get the daily cash back without it either, needing the Apple Cash feature to spend the extra money they receive. So everyone with the Apple Card will have to use Apple Pay, and its usage statistics will rise by the day, fulfilling Apple’s services-based hopes and dreams.

There are also other reasons why Apple is “re-inventing” a seven decades-old technology. With this card, the tech giant is continuing down its path of creating a “holistic customer experience.” Apple wants to be your universe. And it’s getting closer. With every new Apple product or accessory, it becomes that much easier to buy the next one. Why buy Beats wireless headphones when you can get AirPods that charge with the iPhone charger you already own? Apple has control over the platforms through which you text, call, use social media, email, search the internet, work, listen to music, watch TV, the list goes on. And now, you’re going to sign over your credit to them, too. Yes, it’s a bit scary, but it’s the Apple we know and love; why stop now? This is the consumer rationale the company is banking on.

Despite all of the wonderful qualities of the card, and there truly are many, it seems too easy. Have you ever had that moment when a game asks you to allow push notifications, and you click “yes” without thinking, but upon getting hundreds of notifications a week from FarmVille—”your animals miss you,” “come back and tend your seeds,” “the livestock are hungry,”—you decide to go back into settings and prohibit notifications? Because, let’s be honest, you didn’t really even want FarmVille; it was more of a curiosity download. Although the Apple Card is certainly not as easy to sign up for, seeing as it has an application process, it’s also more serious than Apple’s marketing may make it seem. You can’t just hide notifications on the Apple Card; it’s not like other Apple products. It is now and forever tied to a credit score, and if users are too trusting or carefree, this card has the ability to put them in debt. So, to everyone who is interested in this innovation, to be released this summer, remember that a credit card is a credit card, and the Apple Card is no different. 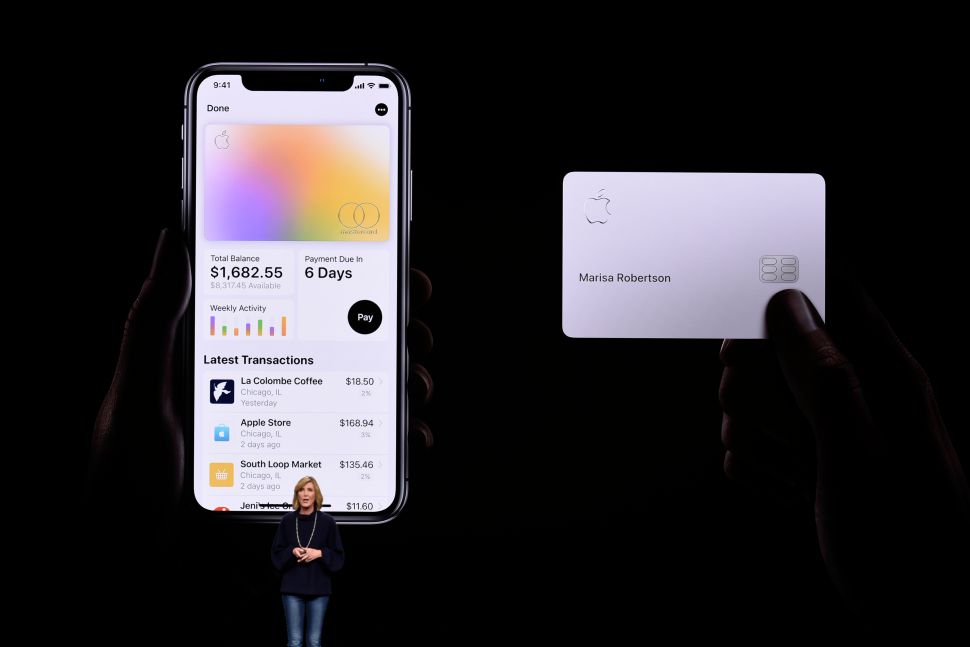