To many well-off people looking to move some excess cash from a bank account to something more valuable, buying artwork sits on the blurry line between a serious investment and merely an expensive hobby. On one extreme, there are billionaire buyers who splurge hundreds of millions of dollars on a world-famous painting, then lock it away in an underground safe in Manhattan and wait for its value to increase; while on the other end, there are people who just want a pretty picture on their living room wall but don’t want to spend more than they should.

“Smart people would build an art collection with an advisor who understands how to make money, and they can buy art that they love and make a lot of money at the same time,” said Philip Hoffman, the founder and CEO of the Fine Art Group, a London-based art advisory and investment firm that runs one of the world’s largest art funds.

A trained chartered accountant, Hoffman started his career in the 1980s with consulting firm KPMG in the UK, sorting out financial messes for large companies across various industries. In 1989, he stumbled into the art world when a colleague recommended him to Christie’s to serve as the auction house’s chief financial officer. At 27, Hoffman became the youngest C-level executive Christie’s had ever appointed. He stayed with the auction giant for the next 12 years, rising through the ranks to become its deputy CEO of Europe—until 2001, when he quit at the height of his corporate career to embark on an adventurous idea of creating something the art world had never seen: an investment fund that specializes in trading art.

Today, the Fine Art Group is one of the largest players in the art advisory and investment space, buying and selling paintings and jewelry on behalf of 140 high net-worth individuals and families across the world, including the Swire Group in Hong Kong.

In an interview with Observer, Hoffman discussed the ins and outs of art investing, how his client base and investment approach has changed over the past two decades, and his biggest achievements—as well as mistakes.

Before you started your own business in 2001, you seemed to be at the top of your career as the deputy CEO of Christie’s. Why did you quit? What’s wrong with the largest auction house in the world?
There’s nothing wrong with Christie’s at all. I’d always wanted to run my own business. I nearly did it when I was 27 years old, but I didn’t really have the finances and experience to do it. At Christie’s, my job was to rip the business apart and turn it upside down. And that’s exactly what I did.

I’m not the sort of guy who likes to run a cruise ship that’s going in one direction—I find that exceedingly boring. I’m really interested in people and innovation. Launching the first Fine Art Fund was innovative; no one had ever run a diversified art fund that was open to all qualified investors in the past. So, we were pioneers in that business.

How does art investment work? What are some of the most common misconceptions new buyers have when entering this market?
It’s a very complex market. Most people think that there are two do’s and don’ts of buying art: Does it look good? And it is cheap enough (whatever cheap means in terms of wealth)?

Back in my days at Christie’s, there was a lady who came in with her husband and saw a Monet on the wall that was estimated at $46 million. They bought it on the basis that the blues and greens in the painting matched the wallpaper in their living room. In that case, the due diligence was: Is it the same blue as my wallpaper? And therefore, bye-bye, the $5 million I’d saved to redecorate my living room.

I’m afraid that the due diligence most buyers do is only about 25 percent more than that.

How we differentiate ourselves is that we actually know about art. We believe there are 50 do’s and don’ts for acquiring art, and we know what those rules are. Most others in the market only look at five do’s and don’ts and rush through them.

There are too many art advisors who are not qualified, who don’t have the experience, nor the due diligence process, required to give sound advice. I believe that an independent advisor should think long-term and stop their clients from making the wrong decision, rather than push through a purchase just for the commission.

Does every art buyer need an art advisor? If a buyer wants to buy a painting just because he likes it and wants to own it as a collectable, would you advise against it, if the painting doesn’t seem to be a good investment?
What I always say to clients is: you should get professional advice if you are spending more than you would on a holiday. So, you or I might spend $2,000 on a holiday. In that case, let’s buy a $2,000 painting, treat it as an expense and enjoy it.

Smart people would build an art collection with an advisor who understands how to make money, and they can buy art that they love and make a lot of money at the same time.

For some clients it’s not about making money, but it is about protecting their assets and safe-guarding their art collection for future generations. If you over-spend on one artwork, that will prevent you from developing your art collection. We spend a lot of time educating our clients, not just about the market, but the academic and historical importance of the artist and artworks that interest them.

In the end, trust me, unless you are in it all day, every day, you need someone to help you.

Who are your clients?
We look after about 30 billionaires—including a few families with $2 billion-plus collections, private equity firms, hedge fund managers and real estate developers. They are based everywhere from Saudi Arabia to Hong Kong to New York to Milan.

You’ve been in this business for over 20 years. Has your client base gotten younger over time?
We’ve seen an increase in young collectors coming to us as they are more comfortable treating their art collections as an asset. Our clients are mostly under 40 years old. Our clients age between 35 and 55. The 60-year-old sailors are like, “We’ve done it. We’ve been there. We’re not going to live long enough to see it out.”

I’d say you have to look at six months to three years if you’re going to make money. And the best investments usually require a three- to five-year view.

That’s pretty short.
Yeah. I mean, if you want to invest in old masters, then you probably need to take a 10- to 20-year view instead of two years.

Is it true that contemporary art is a lot more risky than old masters?
No. In fact, right now, the old masters category is quite risky. If you take a two-year view, you could lose 20 percent to 50 percent. Some people don’t realize what old masters really means—we’re talking about artists from the 14th century to the 18th century, and their works could range from $10,000 to $100 million.

Though old masters can be a very good long-term investment if you are patient. And some people say the definition of a great investment is that if you have a very, very long-term view, everything will go up.

But if you’re looking at the next five years, contemporary art is where all the money will be made, because the 35 to 55 year olds are looking to buy art from their own period.

The question is: which period of contemporary art should you buy? If you go to an art fair, there can be thousands of artists represented. Which one should you buy? There’s where an art adviser comes in. We don’t tend to invest in artists who are making the biggest headlines right now. We try to be a year or two ahead of the game, so by the time the world is all getting excited about an artist, we’ve probably moved on.

Have you made any mistakes in your career?
Oh yes. We did make mistakes. Between 2009 and 2012, we put about $600,000 into Chinese contemporary art. We lost half of that investment—we broke even on one picture, lost 20 percent on the second and lost 75 percent on the third rather.

What do you think of this emerging group of Silicon Valley entrepreneurs who are looking to disrupt the traditional art market with such new ideas like online auction platforms, blockchain-powered art platforms and so on?
In short, I think it’s a great way to piss away your money. Everybody says they’re the Amazon of the art world or whatever. And some people are investing $100 million, $200 million or $500 million into this. But it’s going to be a long haul, and it’s going to be very expensive. And in the end, one of the big players will come in and just pick up all the technology and launch a major platform.

Right now, there are just too many experiments, too much effort and too high of overheads. I’d say that those people who have bet on this will lose most of their money—probably 100 percent of their money.

Do you buy art yourself?
I do collect but not at the same level as my clients. My wife and I have been buying Bridget Riley’s for a few years now, and I’ve collected antiquarian books since university. As a shareholder of the Fine Art Group, I’m very much invested in the art world; the company also invests alongside clients in some of our deals.

Correction: A previous version of this article mistakenly stated the Swire Group as the Swire family. 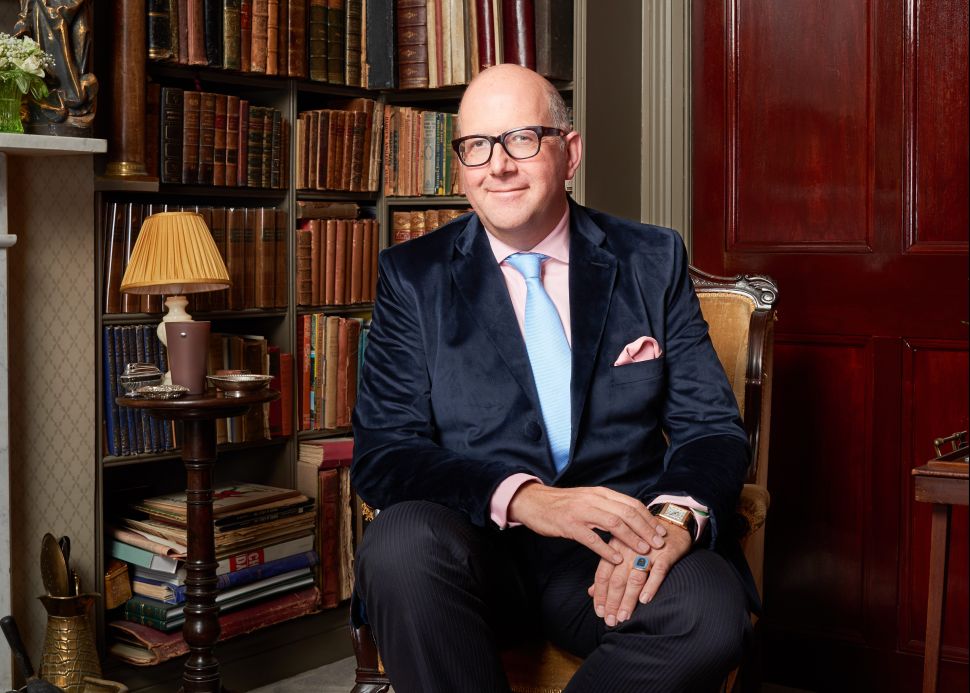