The secrets and revelations keep stacking up on Big Little Lies as the Monterey Five maintain that Perry (Alexander Skarsgård) slipped the night he died. Renata (Laura Dern) threw a huge disco party for Amabella’s (Ivy George) birthday to mask the fact she is about to lose all of her money thanks to her husband’s shady dealings, meanwhile Madeline’s (Reese Witherspoon) marriage is on shaky ground. These women know the power of appearances to make everything seem fine. But even with the best foundation or a bold pink lip, the cracks are beginning to show.

As the head of the makeup department, Michelle Radow (Sharp Objects, The Affair) overseas a mammoth operation that includes eight personal artists to the six leading actresses. Radow credits Season 1 makeup department head Steve Artmont, director Jean-Marc Vallée and the personal makeup artists who worked on the first season for setting the tone. Unlike the characters on Big Little Lies, there are no secrets between this team. Shooting out of sequence means complete transparency, and Radow posts each individual script breakdown in her trailer. The individual artists develop each actress’s look with her involvement, but Radow explained to Observer, “We are very close, we talk and I have an open policy and trailer. We all work together and share knowledge and products.” Below Radow talks us through some of the overall themes of Season 2, the glitter-fueled disco party, and working with younger actors.

Makeup as a Metaphor

“These women are mostly wealthy, they’re living in Monterey, they’re all moms. I think you could tell from the scenes at the school, they’re all trying to one-up each other with their looks, and appear like everything’s fine on the outside. My personal feeling with the storytelling, what they had written in the script with Celeste (Nicole Kidman) applying makeup in Episode 3, is that she is hiding from herself. She’s applying it as if everything’s fine. Just trying to cover up the trauma.”

“Abigail is rebelling. We explored this with super chunky overdone mascara and chipped nail polish; she’s changing it every few days and just doing fun stuff teenagers would do. She’s showing up in fishnets and green nail polish, chipping it and then putting glitter over the top. It’s a contrast between her and Madeline.

“I think there was somewhere between 40 and 50 adults and about 80 children for the disco scene. We would usually rotate the children in and out because children work fewer hours than adults. I had 18 additional makeup artists every day for a week.

That’s probably my favorite moment and memory of the show, that whole disco week. The kids coming into the trailer, lining up so excited saying “I want glitter, I want glitter.” They would hang out in the trailer and watch each other get their makeup done. Alix Friedberg [the costume designer], Jose Zamora [the hair department head], and I collaborated on Ziggy’s ode to Ziggy Stardust. Iain Armitage, who plays Ziggy, is very into music and theatre, he definitely knew the Bowie reference and wanted to wear it home most nights after filming.”

“We knew Episode 4 was going to be such a visual episode with the costumes, the makeup, and the hair. We talked a lot about that. I made sure I talked to all the personals so that no two actresses had the same bold eyeshadow or flowers on their face. Simone Siegl, [Laura Dern’s personal makeup artist] and I worked together a lot on the color scheme. We used the same glitter on both Amabella and Renata. I worked with Alix [Friedberg] the costume designer, I knew they were wearing the same dress. We wanted to make sure it looks cohesive. Renata clearly would’ve hired a team to come over and get the two of them ready.”

The Pressure of Natural Lighting

“Jean-Marc Vallée only used natural light [on Season 1] and it was the same on Sharp Objects. Andrea Arnold, who directed Big Little Lies Season 2, also uses the same natural light. I learned to really love it. When you do it over and over, you can assume how the makeup is going to look in broad daylight if we’re out at the beach. But the tricky part is when you go onto a set and it’s natural lighting. So if it is a set of a hallway and there is a hallway light, that’s the light. It’s just being really quick on your toes, being able to have the tools on you and be ready to pump things up or bring things down if you need to.”

Accounting for the Tooth Fairy

“The little Monterey Six [the kids] were fantastic to work with. They were pretty much up for anything. Four children out of the six had fake teeth; they had like little fake flippers that we had to get made from their dentists because they were at that age where they were all losing their teeth, which would pose problems for continuity. That kept us really busy too, keeping track of the teeth. The twins, Cameron and Nicky Crovetti, would love to play tricks on me and my key [Erin Rosenmann] telling us that we mixed up the teeth.

Sometimes production can get really stressful and you’re working these long hours. You’re shooting everything out-of-order and you have to keep grounded. I think having all the kids there kept everybody on the set laughing. You could have one of the really, really heavy hard-hitting scenes and then right after that we have the twins eating pizza with Meryl Streep. 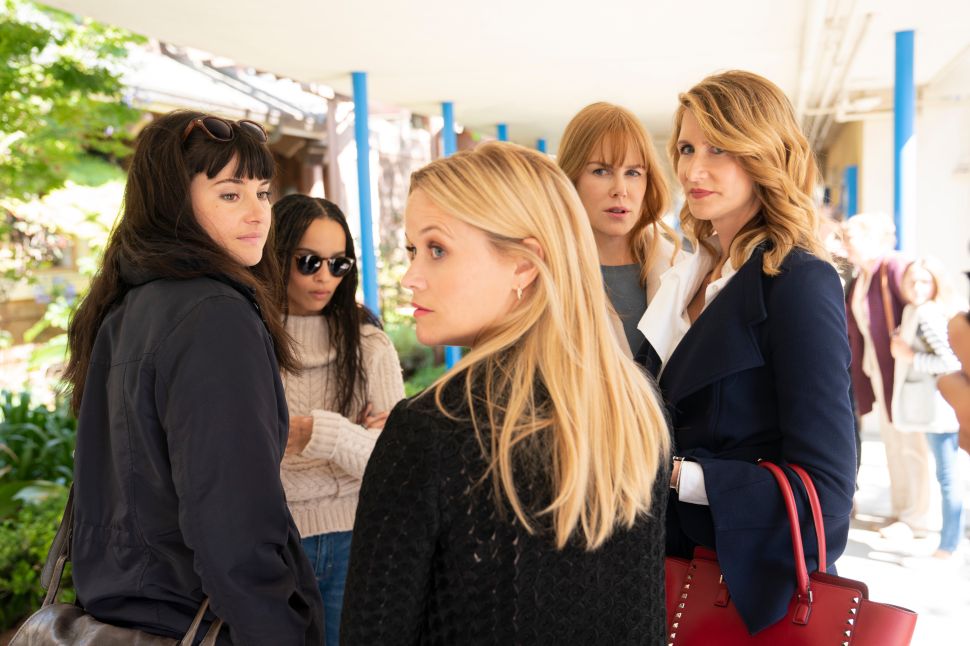