Netflix is kicking glass and taking names with its newest reality-competition series, Blown Away.

The series pits ten master glassmakers against each other to see who is—wait for it—Best in Blow. Each of the season’s ten episodes depicts the artists responding to prompts ranging from their memories, to food, to, in the finale, creating a multi-piece installation from scratch in just eight short hours.

The winner of each challenge earns praise while the loser is sent home. The grand champion walks away with a $60,000 prize package that includes a fellowship at the renowned Corning Museum of Glass.

SEE ALSO: To Mark 500 Years Since da Vinci’s Death, the Met Is Unmasking His Painting Method

“Glass is different from any other medium,” says Eric Meek, senior manager of hot glass programs at the Corning. “Maintaining a glass studio is incredibly expensive. A residency at the Corning means that the winner can concentrate on making art. We’ll provide a studio space as well as assistants, tools, and all those concerns. It allows for a creative freedom that ensures their artmaking can thrive.”

In addition to the fellowship, the Corning had a big presence in the finale. Meek served as the guest judge while his core team of professional glassmakers, each with decades of experience in the craft, provided assistance to the finalists.

Meek says, “Part of my job at the museum is to help my team have great opportunities. I just felt as happy as I ever could while watching everyone participate. They were all really nervous to be on TV and everything, but the process requires a great deal of focus. Both teams were honed on the goal of helping the finalists realize their visions.”

The show’s producers at marblemedia approached the Corning early on in the process to see if the museum might be willing to assist during production. Those initial conversations revolved around the museum providing tools and other materials for the contestants. The benefits of pairing the museum’s mission with binge-worthy television quickly became apparent.

“We saw how it could really shed a light on the process of glassmaking, demystifying something that many people don’t get exposed to,” says Meek. “And that’s our goal too, to help people understand glass better. This show does that and that’s why we’re behind it.”

Seeking help from the Corning was a must-have to make sure that Blown Away had industry bonafides. The Corning is the world’s most prestigious institution dedicated to collecting glass works and educating the public about glassmaking. Its collection spans more than 3,500 years, while the outreach programs that Meek oversees brings glassmaking demonstrations to people around the globe.

Meek says, “Marblemedia told us that when they went to Netflix and sold the show, the fact that the Corning Museum of Glass was a partner really helped to seal the deal. It was an endorsement from experts in the field who carried the weight and reputation of a 70-year-old institution.”

Filming took place in Toronto (four-and-a-half hours away from the Corning’s home in New York state) at a facility that the show bills as “the largest hot shop in North America.” The program aired on the Canadian TV station known as Makeful before its Netflix debut. Blown Away was, according to Meek, the most successful show ever to grace Makeful’s lineup.

Netflix committed to a single season. A second may happen if enough people watch and talk about Blown Away over the next couple of months.

Blown Away stands out among other summer debuts for its blend of humor and humanity, its deft commitment to craft and its willingness to acknowledge the awkward dance between creativity and competition. Hopefully its first champion will not be its last and we’ll once more see its glory holes glow with 2100-degrees of fire and molten glass. 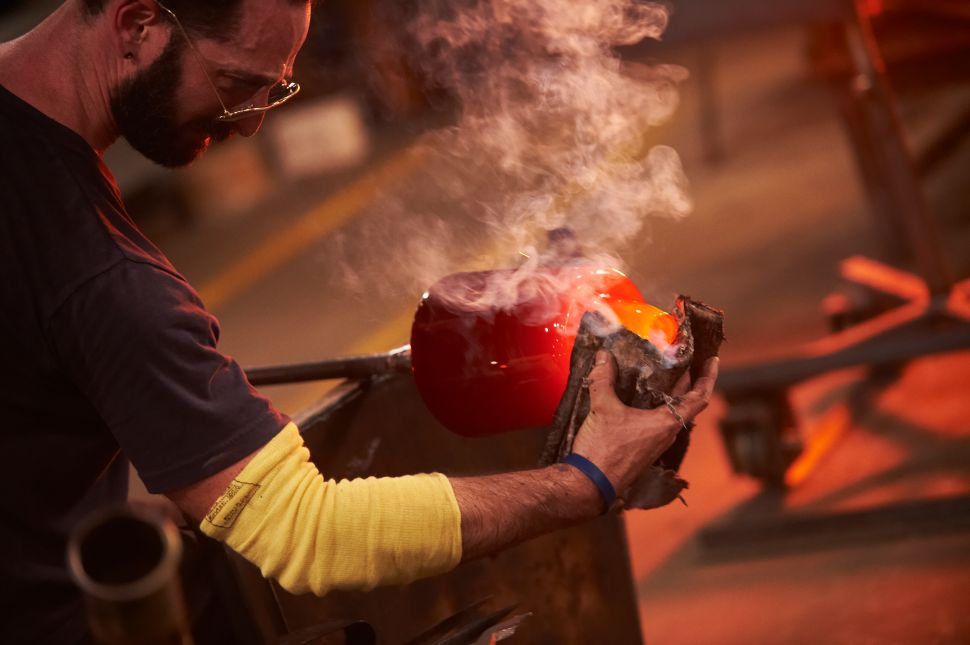