A small group of dancers from the Royal Danish Ballet turned up at the Joyce last week with an all-Bournonville program, and we thank them: to watch Bournonville is to be happy. Alas, the days are over when the entire company would come to the Met with full-evening works like Napoli—joy incarnate. Well, as we’ve been told, beggars can’t be choosers. And yet we dance-lovers can’t help being choosy.

When a different small group, officially representing the company, was here several years ago, they brought with them a severely stripped-down version of Act II of Bournonville’s most famous work, La Sylphide. And the latest group has done it again. But who wants to see, on its own, the second act of a story ballet? Who can understand it? Why is that dainty sylph with tiny wings on her back flitting around with three other sylphs while an impetuous young man is pursuing her and an evil crone plans and achieves their destruction? Not even the playbill deigns to explain, although it does provide a pretty photo of Act I with no explanation or caption. This is not giving the audience a break.

SEE ALSO: Ratmansky’s ‘Sleeping Beauty’ Puts ABT to the Test


The choreography is ravishing, of course, as today’s New York ballet-lovers may well remember from the full Peter Martins version of La Sylphide at City Ballet. But this single act of a famous ballet does not work on its own, the way the great “Kingdom of the Shades” act of La Bayadère does. It’s ballet interruptus, only here you get the climax without the foreplay rather than the foreplay without the climax.

The Sylph was danced by Ida Praetorius, the Royal Danes’ youngest principal. She’s strong and she’s good to look at, but she’s hardly ethereal, not the delicate, almost childlike trouble-maker we’re used to. The Witch was performed by the famous Sorella Englund, now in her seventies and clearly happy to be along for the ride. Her remarkable powers, however, seem to me to have diminished. Ulrik Birkkjaer was focused and manly as the unfortunate James.

The second part of the program was a happy group of Bournonville items, clumped together under the descriptive title “A Bournonville Square.” And, yes, the entire company of thirteen, cheering each other on, was standing or sitting around an undecorated space that we can easily imagine to be a village square. (A sense of community is absolutely essential to Bournonville—one of the reasons we love him.) Five selections made up the divertissement. The charming pas de trois from The King’s Volunteers on Amager—charming, yes, though not as charming as it has been. The famous jockey dance—fun and games. The humorous “Streetsinger” solo from Napoli—humorous.

And then the high point of the evening: the pas de deux from The Kermesse in Bruges—the high point because it gave us the finest dancing. Jon Axel Fransson and Stephanie Chen Gundorph finally showed us what Bournonville can be at its best: the lightness, the lilt, the conviction, the generosity; the combination of exquisite technique with quiet feeling. Fransson, in his violet costume and with his rare blend of elegance and untrammelled energy, was particularly inspired.

The big finale—the pas de six and “Tarentella” from Napoli—had all thirteen dancers (Englund encouraging the others from a bench on the sidelines) spilling over the stage with a rush of solos and duets and groupings; their friendliness and vitality; their appreciation of the masterpiece August Bournonville bequeathed them more than 175 years ago.

Meanwhile, up at the Rose Theater in Columbus Circle (perhaps the most inconvenient major dance venue in New York), Mark Morris was presenting his eighteen dancers, a number of them more or less new to us. First there was a world premiere called Sport, to Satie’s Sports et Divertissements for piano. Some of his pieces are so short they’ve barely begun before they’re over—the music is witty, provocative. The dancers are following Satie’s instructions, demonstrating a succession of…sports. These two people are battling furiously at tennis. And look—golfers! Sailing! Swimming! They hunt, kneeling and shooting. They picnic. They tango. Morris’s choreography is sure and transparent—we always get what’s going on. It’s all a lot of fun, but I’m not sure it’s a work I need to see again right away.

The closing piece was a major Morris success, V, about which I’ve been in a small negative minority since its premiere in 2001. Why negative, given its ingenious and powerful choreography? Because its music, Schumann’s great Piano Quintet, simply overshadows and overwhelms the dance. I don’t want distractions from that music.

What was utterly enthralling was a big, challenging, thorny, tragic, joyous piece called Empire Garden, to the magnificent Trio for Violin, Cello, and Piano by Charles Ives. What music! What a dance! I reviewed it here ten years ago when it was new, and since my feelings about it haven’t changed, I don’t think I can do better than quote from what I wrote then:

“It’s ragged, sometimes it’s opaque, but it rises to a big occasion: the glorious Ives trio for violin, cello, and piano. And it responds to a big subject: America…The Ives score is complicated—murky, then triumphalist—but Morris hasn’t tried to parse it; he’s risen to it imaginatively.

“Fifteen dancers are costumed (by Elizabeth Kurtzman) in garish primary colors, in designs that suggest toy soldiers, movie ushers, band players ready to march to Souza. At times they’re celebrators, at times they’re mourners, as they react to the constantly changes impulses of the music. There are passages of pure romp (Ives labeled one section ‘This scherzo is a joke’), then recurring unsettling passages in which combinations of dancers tilt dangerously to the side before falling to the floor. Women are lifted high and carried like boards. Hands flutter nervously….

“Typically, Ives incorporates bits of musical Americana into his score—‘My Old Kentucky Home,’ Yale college songs (‘A Band of Brothers in DKE’), hymns. They don’t come across as pastiche; rather, they’re folded seamlessly into the texture of the rest of the score, enriching it. Morris responds to all this openheartedly, and without literalizing any of it. We may not know what Ives, and America, mean to him—he may not know—but we know they’re important to him, and not just because he can match steps to the music or decorate the music with steps.

“As with all such ambitious and suggestive works, Empire Garden needs time to settle in—just as we will need time to fully absorb it.”

Empire Garden has settled in and reveals itself as one of Mark Morris’s grandest works—and one of the finest dance pieces of the last decade. Are we going to have to wait another ten years before seeing it again? 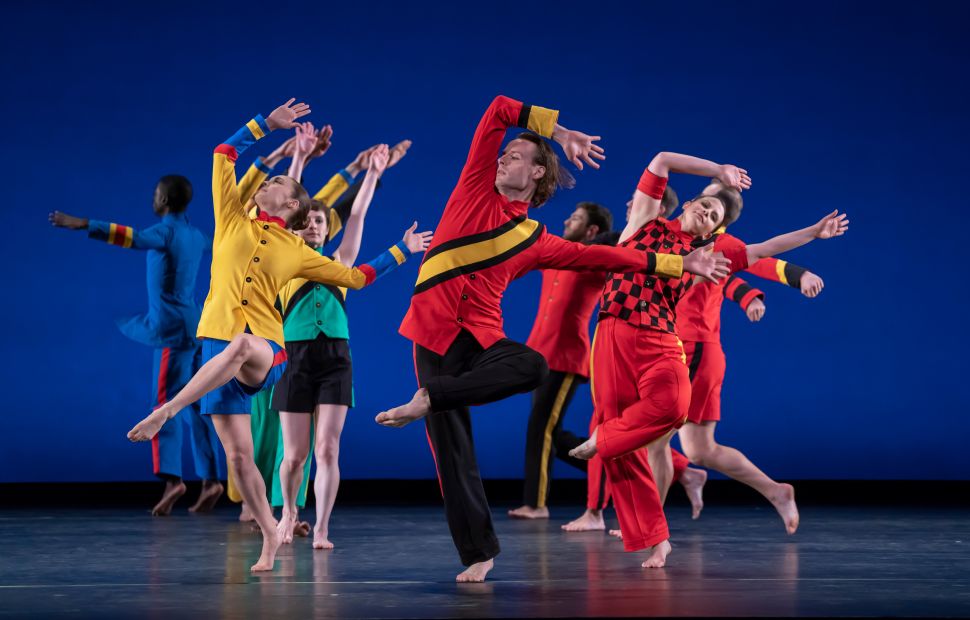