Working on Wall Street straight out of college is a dream come true for many graduates. For Allegra Cobb, the protagonist of Madeleine Henry’s debut work of fiction Breathe In, Cash Out, it’s a curse. Featuring fraternity-like behavior, forty-eight hour working weekends, one hour of sleep a night, junk-food binges, and endless graphs, powerpoints and pitch books, Allegra’s life as a second-year analyst is unbearable at fictional firm Anderson Shaw. Even though Allegra was raised by her father to want this post-college Wall Street career, readers can see at the outset how eager she is to leave this suffocating life behind.

It’s no secret that the road to becoming a Wall Street banker has its difficulties, the beginning years perhaps being the most tumultuous. Many employees in this field stick around because there is a pot of gold at the end of the rainbow, literally. The pay-out is great. Allegra has a pot of gold, too, but isn’t money; it’s something entirely different: yoga. As she states in the novel, “I just never cared about prestige or power the way Dad did…I cared more about my inner life.” She has no desire to be a vision of economic success; instead, she dreams of strengthening her body and mind, and their connection to each other. Her plan relies on holding out until her year-end bonus and then quitting, dignity in hand, so she can practice yoga full-time. The problem is her bonus is months away, and although this seems like a sound plan, it doesn’t pan out that way. Yoga is on the horizon, but it seems that every second she spends at her soul-eating job, the farther away it becomes.

SEE ALSO: Lauren Mechling on Why Her Novel About Friendship Had to Feel Like ‘A Gut Punch’

Henry herself  is an ex-Goldman Sachs banker and yogi, and it’s easy to see there’s a lot of truth in her fiction. She, more than anyone, knows how depressing the work culture can be at a firm like Anderson Shaw and why Allegra is so desperate to escape. Henry gave some insight into her own time as an analyst, telling Observer, “There’s a sense of, ‘Why am I doing what I’m doing?’ You can feel very disconnected from the fruits of your labor, and your connection to the meaning of your work can be very distant.” She also mentioned that “at the bottom, the body is just not valued. Juniors at these big New York City firms are largely sedentary; their schedules are erratic because they’re at the beck and call of clients. And they don’t know what to expect day-to-day or week-to-week, which is very stressful as a human being because we tend to be creatures of habit.”

Whether Allegra is able to make her radical change will be up to readers to find out. But for a hint, we can look to Henry’s post-Wall Street life in which yoga plays a big role, especially judging by the popular Instagram account she runs, @madelinehenryyoga. For her, she clearly found her job and the practice she loved incompatible. “Yoga woke me up to my body. I’d never had the body emphasized in these Northeastern intellectual institutions, and here was this practice that said, ‘this is actually important,’ and it really resonated with me.”

Yet that’s not to say that her life as a yogi has been synonymous as cutting herself off from the world. Her Instagram account, which counts over 30,000 followers, is a tool that Henry sees as useful for her practice, though many might be skeptical of its place on the often superficial platform. For Henry, it’s a way to spread the yogi-spirit. “I am net positive on social media in the case of Instagram,” she explained, “because I have a lot of real relationships that were formed through Instagram with other yogis. And I have relationships that are maintained exclusively through Instagram with people I wouldn’t otherwise see or interact with, so it has really been a big connection machine for me.” And towards end of Breathe In, Cash Out, readers can see Allegra learning how to do just that: use Instagram to enhance her yoga practice and make connections with those who share her passion.

In the post-Goldman Sachs life of Madeleine Henry, she has had the time to practice yoga, write and get her first book published. She spoke briefly to the difficult process of being a debut novelist, advising that any burgeoning author should “set expectations for the long-term; put in the time every day, and celebrate the little victories along the way.” Now that she has taken this in stride herself, there’s another one in the works. This time, a story depicting an “imperfect course of love” rather than a career gone awry—though using Henry as a mirror we know it’s ultimately a success story 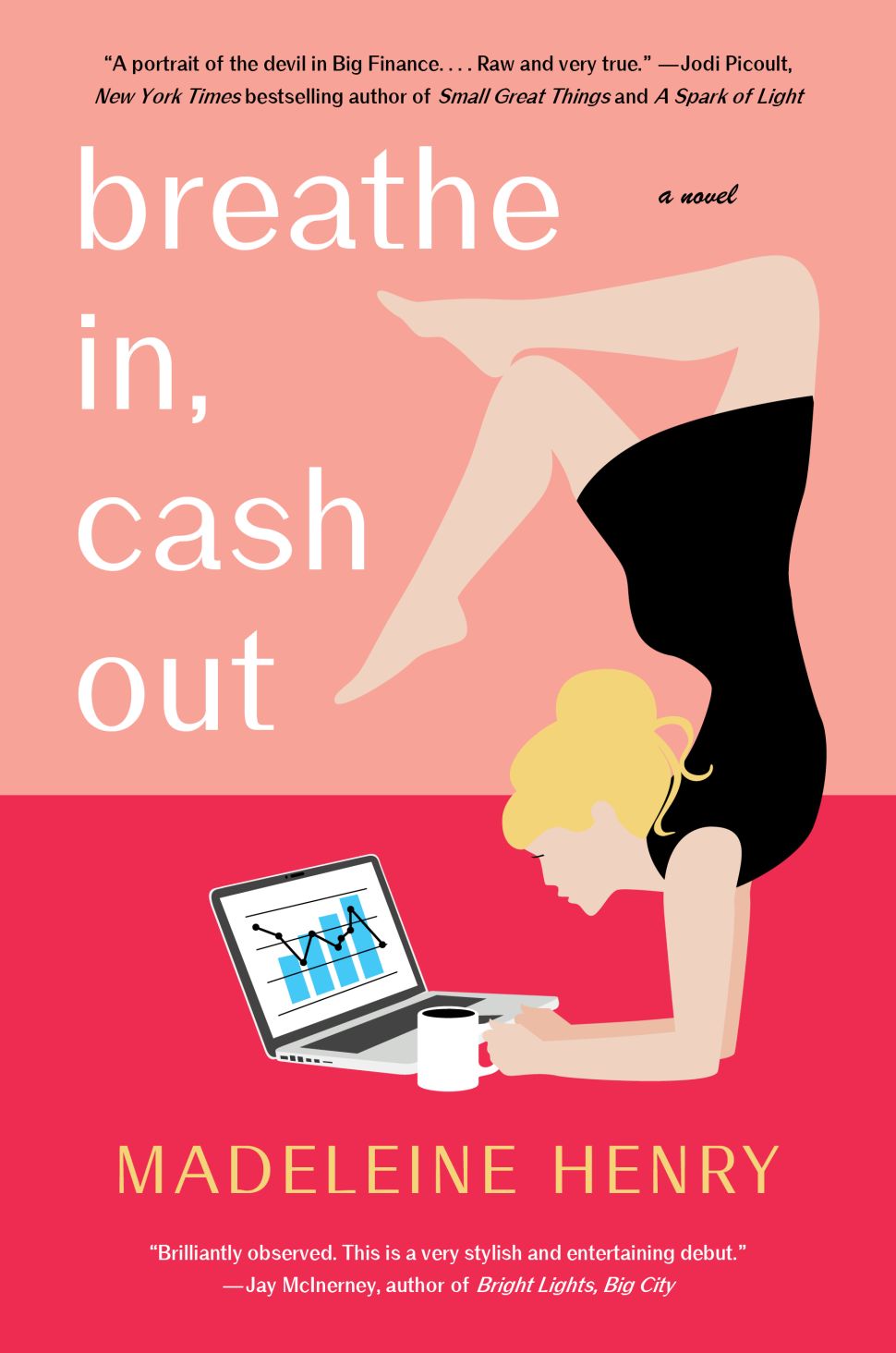