When I first went to a Formula E race,  five years ago in the streets of Miami, it felt a little bit like a freak show. It was the first season, and they’d yet to establish proof of concept. At one press conference, Richard Branson downed a shot of sea algae glycerin, used to power the generators that charged the cars. The lead car ran out of power on the final lap, stopping dead. The driver who passed it, the ridiculously-named Scott Speed, had just won the Global Rallycross race at the X-Games the month before. Crowd response was tepid, and the series’ future uncertain.

Five years have passed, and Formula E is still going. They held this weekend’s race, technically called the New York City E-Prix, in Brooklyn for the third straight year. The race cars, sanctioned by the FIA, the international governing body for motorsports, looked like cool futuristic robot sharks. They maxed out at 130 MPH, slower but sleeker than your average NASCAR beast. They made some noise, but it was a high-pitched whine with a little thwip thwip thwip on the back end, more like a motorcycle from Tron than an actual race car. And, until the brakes started running hot at the end of the race, the air smelled as sweet as air could smell in Red Hook on a hot summer day. It was a nice little peek into our automotive destiny.

SEE ALSO: Is the US Inhospitable to Electric Car Ownership?

Formula E prides itself in street racing, holding contests this season in Paris, Rome, Riyadh and Hong Kong, among other locations. It wasn’t exactly a “street race” through Brooklyn. They built the track among the parking lot for the docks and a Customs and Border Protection facility. But it was still definitely a transformed urban environment.

The crowds had grown larger and more enthusiastic since 2014; the sport had evolved. For the first five seasons, the cars ran on a 28kWh battery, enough to hold a charge for a race-car at full sprint for about 25 minutes. This meant that halfway through the race, the drivers had to pit, hop out of the car, and get into a second, identical car. It was kind of funny, but also kind of ridiculous, the Speed Racer version of range anxiety.

Starting this year, the cars have a 54kWh battery. They’re slightly heavier, have slightly more power, and still take an hour to fully charge. Most importantly, unless the driver has a serious lead foot, they last the whole race. Every car comes equipped with the same shell and same battery. The FIA requires those qualities to be uniform, though the manufacturer teams can fiddle with the electric motor or other components as they see fit.

And so the car zipped around all weekend. Sometimes they crashed, particularly coming out of one tough hairpin, and the packed grandstands gasped appropriately. This season Formula E added something called “Attack Mode,” where the drivers got a power surge for four minutes at a time. There’s also a “Fan Boost,” where people can vote for their favorite drivers on social media, giving them a little additional juice.

But beyond all that nonsense, the real developments were on hand in the eVillage outside the track, which served as a vast public electric-car expo. Not only was there a big and fun gaming center where fans could simulate driving an electric racecar, but the manufacturers got to show off their wares. The Swiss company ABB had a sizable display of the batteries they use to charge the cars. Manufacturers like BMW, Audi and Mercedes had sizable pavilions, trumpeting themselves as the next big thing in electric cars. Off-campus, Nissan took over an entire brick warehouse to show off its own electric future.

Meanwhile, inside a customs facility transformed for the weekend into a garage, the future charged. For the first time this season, Formula E has a “support series,” races featuring a few pro drivers and a few amateurs. Every one of them raced an identical Jaguar I-Pace, the revolutionary and much-lauded electric compact SUV. In the garage, the I-Paces powered up, connected to a reasonably small power ABB cube, not much larger than a piece of living-room furniture. The cubes, connected to a biodiesel-powered generator, could easily fit into an average suburban garage. As the tech develops, they’re only going to get smaller.

So every time the cars whizzed around the racetrack, the electric-car future came into sharper and sharper focus. BMW, Audi, Jaguar, and Nissan already have teams in Formula E, and Porsche and Mercedes are going to join the series next season. Between races, a pre-production Porsche Taycan, Porsche’s long-awaited electric consumer sports car, rocketed tantalizingly around the track. The once-promised electric car future appears to finally be materializing. It’s not noisy, it’s more than fast enough and it doesn’t smell like exhaust. That’s pretty good progress for five years. 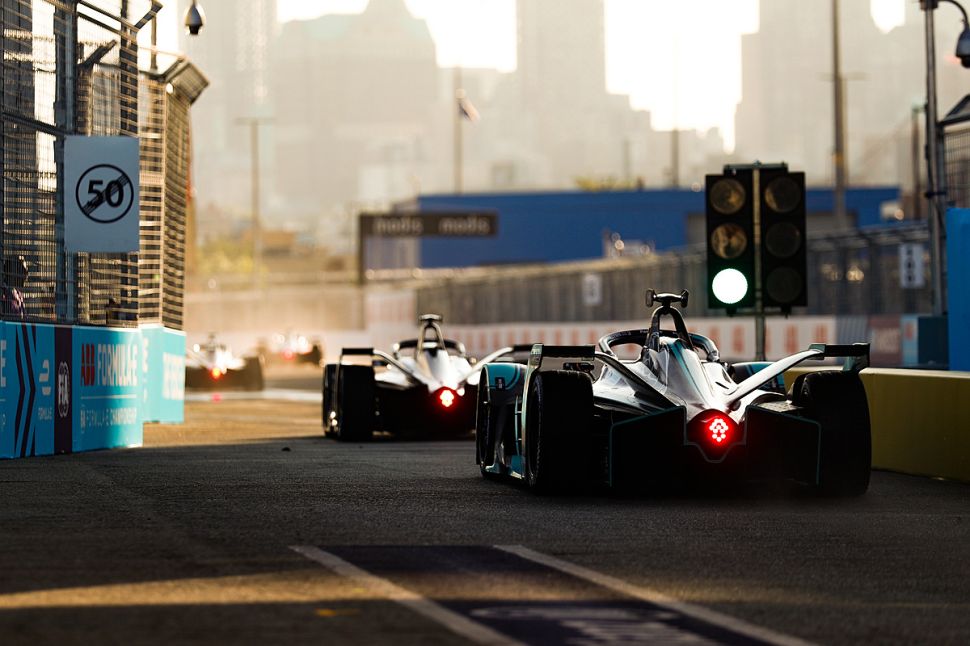