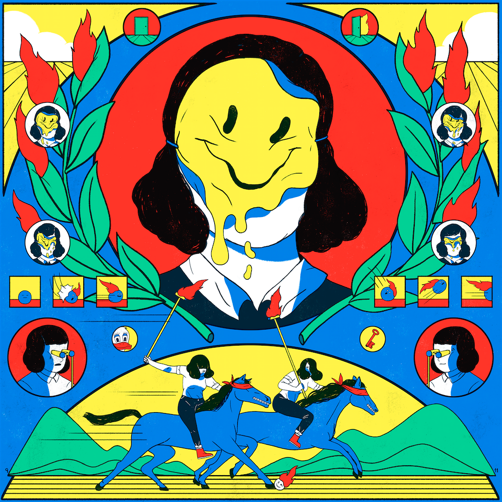 An illustration by Cristina Daura made for Fuego, a month-long celebration at the Barcelona night club Razzmatazz. Cristina Daura

Outlined with thick, black lines and filled with primary colors, the digital illustrations made by Cristina Daura are both attention grabbing and worth a lingering look. Daura is a rising digital illustrator based in Barcelona, Spain. Her illustrations are constructed primarily in Photoshop using brilliant, almost garish primary colors to create striking and thematically complicated images. You may recognize her work for the stories they’ve accompanied in The Economist, the New York Times and New York Times Magazine’s “Diagnosis” column, or maybe you’re one of her 100,000 Instagram followers. But despite her burgeoning global popularity, Daura wants it to be clear, her work is deeply rooted in the city she calls home.

Barcelona is everywhere in Daura’s illustrations. And not only because, despite her meteoric rise in the illustration world, she consciously maintains a practice that supports her community: musical events occurring in the city or small Barcelona-based brands are a regular part of the work she takes on. No, beyond that, the city serves as her muse, as the urban changes taking place around her frequently show up as concepts baked into her images.

SEE ALSO: Next Year’s Winter Show to Feature an Exhibition of Masterpieces by El Greco and Velázquez

In one promotional image for Fuego, a month-long celebration at the Barcelona night club Razzmatazz, she subverts the traditional portrait style as she captures the silhouette of a young girl with dark hair framed by a wreath. However, masking the girl’s face is a melting and garish “smiley face,” reflecting a sort of public façade. Surrounding this image are smaller circles containing the same girl, with the mask in various stages of melting. This masked girl suggests Daura’s critique of the cultivation of personal brands on social media, but can also be expanded to the public image (or mask) of Barcelona that is marketed to potential tourists.

In recent years, Barcelona has surfaced in international news for its role in relation to the Catalonian independence movement. While Daura’s work paints a complicated and genuine portrait of her city, the thirty-one year old illustrator steers away from engaging in explicit terms with the movement: “I usually don’t talk about political stuff in my illustrations, especially on this theme, about independence” Daura told Observer, “I mostly think about Barcelona being overused.” While most people probably recognize Barcelona from glossy photos on their feeds, Daura’s illustrations capture a different city, one with depth and one with grit. There is conflict within the artist’s work—between the primary colors and the thematic nuance—that reflects a greater tension between the tourist’s idealization of Barcelona and the depth of its reality. 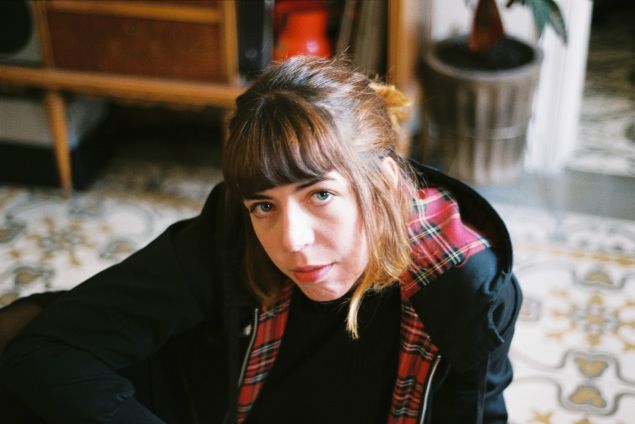 Offering a latent criticism of the recent extreme rise in tourism in Barcelona, she describes the city’s recent transformation into a destination: “Suddenly, [young people] cannot afford to live on our own, we have to share because the rent is too high and that’s mainly because people want to live in Barcelona because it’s cheap. But it’s not cheap for people who are from here. I’m not against tourism, I’m just against bad tourism.” Daura’s description of her home city illustrates the negative side effect that the economically beneficial rise in tourism has caused for locals, including the gentrification of large swaths of the city.

And as much as her works are rooted in this citywide narrative, they are also intimate and personal. A recurring motif within her work is that of a girl with short, dark hair. Her face is usually obscured in some way. But more than just bright, flashy illustrations, there is always a deeper meaning. “In my case, I try to explain stories with my illustrations. Sometimes they are related to my city, sometimes [they] are related to my personal friends or other situations in my life.” During a time when Instagram is overwhelmed with selfies and personal content, Daura manages to create images that appear genuinely introspective. 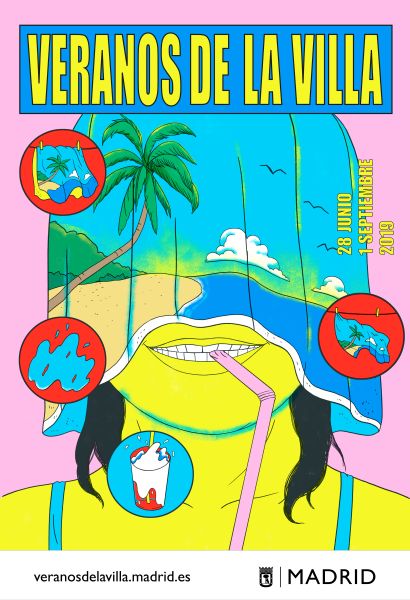 That’s not to say that Daura is at odds with the social media platform. Though she’s keenly aware it’s ultimately a narcissistic tool, it’s one she’s had to come to terms with for the purpose of building a career. “With Instagram, I use it only for work. I try to avoid it entering my personal life. It’s like I have it, it’s a tool, it’s important. For an artist right now or an illustrator, I think it’s important.” But she also maintains a distance, and has made a concerted effort to use it in not just the expected ways. “I try to avoid putting myself, photos of me, on Instagram. I don’t like the idea of only generating a view of yourself,” Daura said. “It’s fun to explain yourself, but in another way. Instead of putting up a photo of yourself, you can illustrate something related to your life.”

As in her dealings with Instagram, she maintains a healthy skepticism toward any collaboration with large brands. “I hate the idea of accepting work just because they pay a lot or just because the brand or whoever is on the other side is super important,” she said. The best example of this might arrive in her refusal to illustrate for Google Doodles.

A mural commissioned by Nike that Daura dedicated to the “force of female in football but also in any sport.” Cristina Daura

Daura resists most projects that are based purely in advertisement because she acknowledges that her work will be second priority to the product. In an age of constant sponsorship and hidden product placement, Daura’s integrity is refreshing. She describes how she has to “really, really like what they’re selling to accept it. If they’re selling a car, I mainly will say no because I don’t even drive. I work with Nike, which is OK, because I wear Nike. It’s more about saying yes to the things that I like.” Daura created a mural, commissioned by Nike, to welcome Lieke Martens, a soccer player, to the city of Barcelona. The illustration included a variety of Daura’s usual motifs including a fist, flowers and strong circular imagery. Even when commissioned by huge forces, Daura retains her highly identifiable and personal style.

And in between those high-powered jobs, she balances the smaller work for initiatives she believes in. In her most recent project, Daura designed a graphic campaign for the festival Barranco, which she calls a “a great music festival in a very small village in the middle of nowhere.” More specifically, Barranco takes place this weekend in Fitero, Spain, in the town’s central square, featuring a variety of musical acts including techno, electronic, indie pop and a DJ set.

In the age of Instagram, Daura posits a model of artistic and individual integrity, resisting jobs that more opportunistic artists would jump at. “For me, for example, if it’s a project related to music, I have to listen to the band and think, OK, that band really moves me.”  Whether drawing about Barcelona or about herself, Daura is authentic to the point of bluntness, and as a result, her illustrations have the capacity to move.