Locals sip Devoción’s artisanal coffees from yellow ceramic cups in the expansive café, past the roaster, illuminated by a huge skylight and decorated with a lush garden wall. Baristas grind beans and make coffee drinks for the steady flow of young customers.

SEE ALSO: A Chat With the Owners of BonBon Candy Store

Steve Sutton is the founder of Devoción, originally from Medellín, Colombia. He opened Devoción’s Williamsburg location in 2013 and has since added another Brooklyn cafe in Boerum Hill and one in Manhattan’s Flatiron District. In a month or two, Devoción will open a cascara bar, featuring a drink made from cold pressing the coffee bean fruit.

Sutton claims Devoción’s Colombian coffee is the freshest in the world. FedEx and his supply chain enable beans to be roasted just days or weeks after the dry mill process (when the bean is extracted from its husk), ready for roasting.

Devoción, which employs about 40 people, supplies coffee to restaurants like Eleven Madison Park, some Momofuku locations, Del Posto and the recently opened Crown Shy, as well as various cafes and hotels. Devoción’s 12-ounce bags of coffee sold on their website cost $22, limited editions like “Mothers in Coffee,” made by female farmers and workers, cost $25.

At 14 years old, Sutton came to the U.S. by himself for school to escape Colombia’s violence instigated by drug traffickers, narco-terrorists and guerrilla groups. After graduating college, a brief stint at business school and launching a techno-house music label that died with the invention of Napster, he got a job with a coffee distributer in Miami.

It was there he decided to return to Colombia and launch a specialty coffee business. After several years of coffee sourcing research in Colombia, including in FARC-controlled jungles, he opened up for business in 2006 in Bogotá, followed by the Williamsburg roaster and café in 2013.

On a central leather sofa in the middle of Devoción’s café amid continual dings from his phone tucked into the pocket of his jeans, Sutton described his coffee adventures in sourcing, how he pays farmers and Devoción’s social impact.

You first launched Devoción in Bogotá in 2006?
The first years of the company were about learning how to source. I have to go back to 2003, the [specialty coffee] market was very new. Nobody was sourcing like us in Colombia; we learned to go into FARC territories to get coffees that nobody else got.

Weren’t you scared?
Well, yes, but if you are treating the farmers right, they help you. We were focused on how to get great coffees before they were blended in with regular coffees. To do that, you had to go into red zones. We learned how to talk to the right people, ask for the right permissions, we were afraid but excited at the same time.

So you started roasting and wholesaling?
Yes, in 2006. I roasted the beans as soon as possible after the dry mill process, extracting the green bean from its husk.

Economically, there’s no reason to sit on inventory. Quality-wise, if the coffee bean is fresh before roasting, the characteristics of the coffee are more powerful than if it’s roasted six months after dry milling, which is what many specialty coffee companies do.

We now average roasting 10 to 30 days after the dry mill process, while other companies roast about five months to a year after dry milling.

Is there an expiration date on the green beans after they’ve been dry milled?
As long as the humidity isn’t high so there’s no mold, there is no expiration date. However, it depends who you talk to, there’s a movement about micro-mold, the mold you don’t see.

What prompted you to initially return to Colombia and launch Devoción after living in the U.S. for so many years?
I actually felt bad about leaving Colombia for such a long time, but there was no other option. When I left, Colombia was violent and dangerous. I grew up in Medellín, which was very scary, we briefly moved to Bogotá, but it got heavy there too. FARC was just as horrible as Pablo Escobar. So, I wanted to do something in Colombia, for Colombia.

What is it like sourcing coffee in Colombia today?
Colombia is different; it’s changed a lot. My buyers still go into places where they sometimes get scared. They might find a guy with a rifle that’s not a military guy, it could be the ELN, which is a still active guerrilla group.

I’m guessing most farmers live in isolated areas?
Very isolated. Colombia is vast and the infrastructure is not the most modern. Sometimes, for a 20-mile drive, it can take a couple of hours of off-roading, zig-zagging. A lot of farmers don’t have access to roads, they use mules, 95 percent of the coffee farmers are very poor.

It fluctuates, but we work with more than 1,000 farmers, most have small farms, between three to 10 hectares [seven to 25 acres]; Colombia has only a handful of big farms.

What kind of social impact does Devoción have in Colombia?
We have a humongous social impact, a lot more than companies with 10 or 20 times the money.

We have a department that is only for social work. We are investing in post-production coffee equipment for a school so that it becomes part of the curriculum to learn about specialty coffees.

If the kids can show their parents how to do the process consistently, learn about quality control, then the farmers will eventually be able to say, “Because my coffee tastes like this, I’m not going to sell my coffee below what it cost me to produce.” It’s a simple idea, but you’d be amazed how difficult it is.

We also go into communities that are ex-guerrilla. A lot of the coffee in our Wild Forest blend comes from a former FARC area, which is still very heavy. We go in and help the ex-FARC people to get more revenue and we buy their coffee. They are the ones who say if you can come in, you still have to be able to navigate.

Would a non-Colombian person be able to do that?
No, no, no, no [laughs], no. You can go… but you’re going to get in trouble in a second. My situation is rare, I’m the coffee roaster and exporter and one of the people who sources the coffee.

These third-wave specialty coffee companies work with Colombian exporters. Of course, some huge international companies might have somebody living there for 10 years, then they do become local. If you are not local or with a local, you can get in trouble, but that’s the reality in a lot of places, even the U.S.

On a side note, is your heritage British? Sutton sounds very…
At some moment in time, yes, but all we know is one grandmother was from Syria and the other was from Poland. I think somewhere along the line, the Syrian part had something to do with a British Sutton.

Back to coffee, Devoción coffee is not officially stamped or certified Fair Trade, correct?
We are not stamped Fair Trade. On average, we pay at least 20 percent above Fair Trade, sometimes Fair Trade goes below the actual cost of production.

We don’t take into account what the Fair Trade organization just said; we don’t pay attention to the stock market. The stock market could go down to a cent; we’re still going to pay at least production costs plus a premium.

Why did you open a location in the U.S., in Williamsburg in 2013?
To have the same freshness here that we have in Bogotá. We knew we wanted it to be a transparent working environment.

It’s very transparent, walking by the roaster.
Exactly. You come in through the roaster, you’re invited to have a coffee while we work. Past the coffee shop, you see the wholesale and tech offices—I knew the roaster could not be in the back. It quickly became popular; this year, we should roast over 150 tons of coffee. 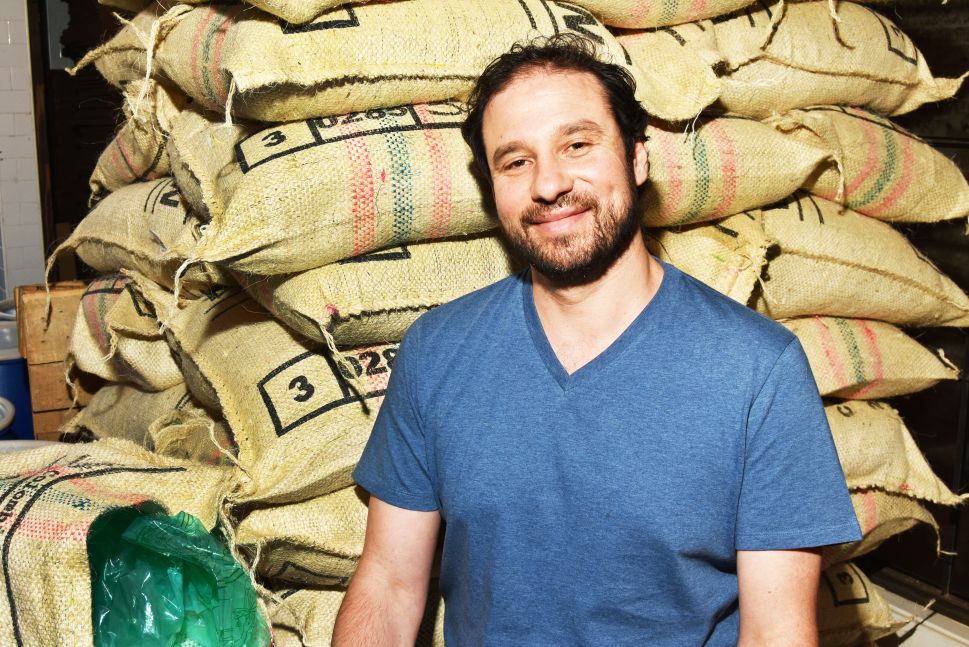