HBO and parent company WarnerMedia had hoped to retain Game of Thrones creators David Benioff and D.B. Weiss once the duo returned from writing their Star Wars trilogy, but that no longer seems feasible. The creative pair are reportedly seeking a lucrative overall deal worth around $200 million with Netflix, Amazon and Disney emerging as front-runners.

Who among these deep-pocketed power houses can offer the most upside?

“Given the incredible success that Benioff and Weiss have enjoyed, they are going to be best served by a platform that will give them the freedom and creative latitude to do what they do so well while simultaneously promoting their shows and content in a way that will attract the biggest audience,” Paul Dergarabedian, senior media analyst at Comscore, told Observer. “All of these platforms have their own distinctive points-of-view and each can provide unique benefits for these highly sought after showrunners.”

Why They Should: No studio is imbuing its creators with more resources than Netflix right now. Earlier this year, CEO Reed Hastings pegged the streamer’s monthly content budget at $1.4 billion, which equates to $16.8 billion annually. Good luck finding that kind of financial support system anywhere else. While Benioff and Weiss were given ample budgets on Game of Thrones, Netflix could easily top them while also reaching more eyeballs. The streamer boasts around 150 million worldwide subscribers compared to HBO’s 140 million.

Netflix is also committed to empowering its talent. Mega-deals for Ryan Murphy, Shonda Rhimes and even Barack and Michelle Obama have cemented the platform as the go-to destination for prolific creators. With a free-flowing development division, Benioff and Weiss would have no problem getting their projects greenlit and funded.

“The safest and most likely suitor is Netflix,” Joe Yakuel, founder and CEO of Agency Within, told Observer. “With a marketing budget of nearly $2 billion last year, they are one of the best in the business at showing off their prized content. The example on the top of everyone’s mind is Stranger Things.”

Why They Shouldn’t: There is speculation as to whether or not Netflix has peaked in its current iteration. The streamer is coming off its worst quarterly earnings in eight years—although long-term concerns are overblown at this point—and is facing mounting competition.

Due to cost-cutting measures and algorithmic data that suggests a show’s value to subscription growth subsides after two seasons, Netflix is also prone to cancel quality series rather quickly. Benioff and Weiss would be guaranteed volume here, but not necessarily depth. That would go hand-in-hand with concern regarding Netflix’s ability to consistently build awareness for its endless sea of options. No one wants to get lost in the fray.

when a Netflix show gets canceled, "you didn't promote the show" is something we (yes I work @ Netflix) hear a lot. But what does that mean to you?

commercials/billboards? too few social posts? you're not shown the title when you log on to netflix? something else? combo of all?

Why They Should: Amazon’s talent pool is a tad more curated than Netflix’s with less of a focus on voluminous output. Fellow GoT vet Bryan Cogman recently signed an overall deal with the streamer, joining Jordan Peele, Neil Gaiman, Lisa Joy and Jonathan Nolan, John Krasinski, Nicole Kidman, Michael B. Jordan and more. That’s an attractive lineup of potential collaborators.

Unlike other streamers, Amazon is committed to theatrical releases. The company’s movies typically enjoy a three-month traditional run before popping up on Amazon Prime Video, and later this year, the studio is releasing Oscar-hopeful The Goldfinch with Warner Bros. Per THR‘s report, the duo are seeking a pact that may include both film and TV, so that’s one area to monitor.

Studio head Jennifer Salke is a well respect industry veteran who is steering Amazon in the right direction. Her powers of recruitment are evident by the collection of talent she’s quickly amassed.

Why They Shouldn’t: Despite our confidence in Salke, Amazon Prime Video is still undergoing a strategic shift away from little-seen niche successes and towards big budget home-run swings with broad appeal potential. They have a handful of ambitious upcoming genre series in the pipeline that they hope will become the next Game of Thrones, headlined by their $1 billion Lord of the Rings adaptation. There are bound to be some growing pains and some high-profile misses.

Elsewhere, Amazon hasn’t been able to consistently profit from its theatrical releases. The studio’s aggressive spending at Sundance this year is now viewed as a major misfire following Late Night‘s flop at the box office. Most important of all, however, is that Amazon employs its Prime Video service to drive users to online shopping hubs. They are a consumer goods business first; entertainment is not the No. 1 priority.

Why They Should: Have you looked around lately? Disney is absolutely dominating the box office (and the rest of Hollywood) in unparalleled fashion. The Mouse House can easily offer the most theatrical upside, and Benioff and Weiss are already working with them on a Star Wars project. As THR notes, Disney could also be offering a TV deal with FX productions, where FX CEO John Landgraf is widely considered one of the best TV executives in the business.

Speaking of the small screen, the Magic Kingdom has a wealth of toys for Benioff and Weiss to play with—ABC Studios, Fox 21, Disney+ and Hulu offer them ample room to stretch out across the airwaves. The duo could combine the short-term infusion of streaming cash with the long-term financial upside of linear TV.

“Disney controls the modern studio crown and is the best choice for them,” Eric Schiffer, CEO of online brand firm Reputation Management Consultants, told Observer. “It’s not just because of [CEO Bob] Iger’s brilliance in talent relations or that it may be the richest deal, but because the Thrones filmmakers can achieve the greatest combined creative and business impact and legacy through Disney’s powerhouse of forces that it unleashes in film distribution, marketing, cross promotion, parks and streaming.”

Why They Shouldn’t: We argued in favor of WarnerMedia over Disney during the J.J. Abrams sweepstakes for the overall health of Hollywood. Benioff and Weiss likely aren’t too concerned with the overarching ramifications there. But Disney’s massive size and scale raises the question of how much care its management can devote to each creative team. The integration of Fox carries with it a host of issues that are still being sorted out, and the dueling nature of Disney+ versus Hulu could cause a few internal headaches. There are going to be bumps in the road ahead.

Disney is also infamously apolitical which, despite the option of working through FX and other Fox properties, might not jibe with the message-oriented Game of Thrones showrunners. 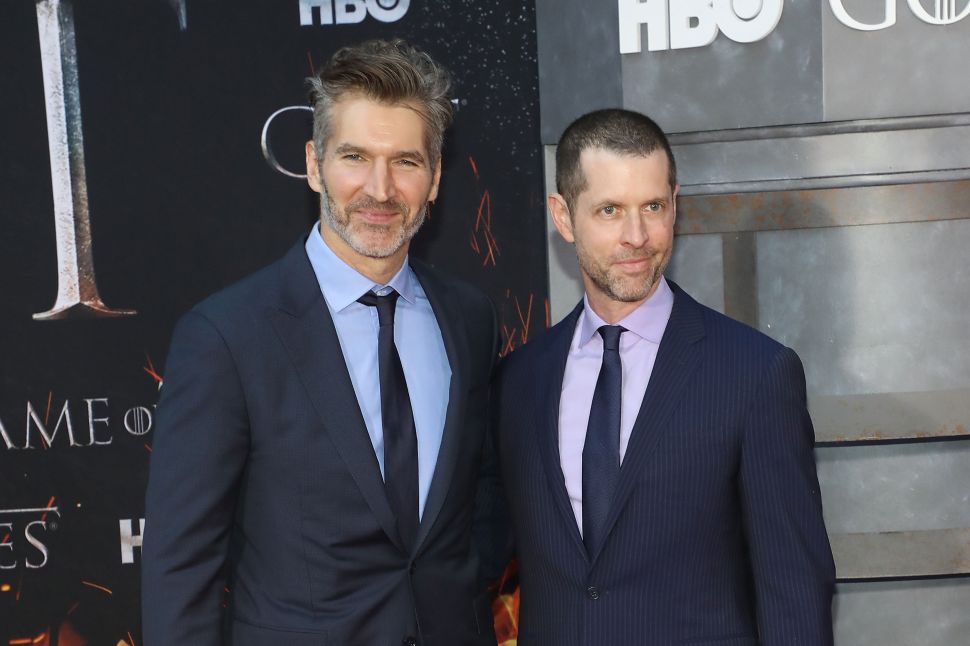