I have an Instagram confession. After my engagement ended, I hid my left hand behind my back for Insta pics because I didn’t want snoops zooming in on the loss and disappointment blinging from my very bare finger.

Similarly, when I was first engaged, I hid my left hand behind my back for Insta pics, because I didn’t want snoops zooming in on the fantasy and fairy-tale blinging from my very betrothed finger.

SEE ALSO: Reshma Saujani’s ‘Brave Not Perfect’ Showed Me Courage Is a Muscle That Gets Stronger With Use

And while the details of my sex life (or currently, non-sex life) are all over the internet, I didn’t want my engagement to be—it felt both intimate and sacred. Sure, it would all seem so shiny and bright, but I’ve always preferred to ease into change. For instance, I’m not one to jump into cold . I inch in and suffer. I acclimate and then suffer some more.

But this story is not about my disengagement, or my truncated left hand on Insta, or even my ex. This story is about having a relationship with a diamond. Because, after all, “diamonds are a girl’s best friend.”

Did you know that engagement rings are believed to have originated in ancient Egypt? The circle of the ring represented love for an eternity—so romantic. But like all good things, patriarchy had to swing its dick and smash it to pieces. During the Roman times it was custom that wives wore rings with little keys attached, symbolizing their husband’s ownership. Not so romantic.

Then in 1477 Archduke Maximilian of Austria proposed to Mary of Burgundy with lots of little, flat diamonds in the shape of an “M.” Don’t you just want to say Maximilian a million times? Unfortunately, Mary fell off her horse, broke her back in a ditch and died at twenty-five. Meanwhile, Maximilian went on to marry two more wives.

While, M and M certainly put diamonds on the royal map, it was De Beers that so cleverly marketed the ad campaign, “Diamonds are forever.” And the rest was a very profitable history.

My parents never did the ring thing. They’re Soho artists and, if anything, they find diamond engagement rings gauche. Their generation burned bras and rebelled against their parents’ square 1950s’ values. But my generation (I just barely snuck in as millennial) is all about the bling. Reared on MTV in the nineties and now feeding off Insta fame and fortune, we are choking on consumerism and status. How many times have we all seen that unctuous three-carat engagement ring sparkling ferociously off on the coast of Capri?

Engagement rings have become a contest and a status symbol of wealth. Whose is bigger? And not only bigger, but better.

“It’s all about the four ‘Cs,’” my new friend Stephanie said. She’s been married twice, so she knows “everything” about diamonds. She also happens to be a jeweler in the male-dominated diamond district.

All kinds of guys walk into Stephanie’s office. This is NYC, so most are buttoned-up finance guys. The worst of them don’t give two shits what their future wives might like. Stephanie impersonated a typical douche, “I’m the one that has to look at her wearing that goddamn ring.”

I laughed, the way you do when someone says something sad.

Stephanie wore an exquisite tennis bracelet on her wrist. She wore a large, yellow ring, bright and warm like the sun.

Then she leaned over and confided in me, “So this one woman came in last week looking to sell her engagement ring, but it had no GIA certificate and it was from Europe.”

“Very. It even had phosphorescence.”

“A diamond that turns blue under a special light. It means it’s poor quality.” Stephanie was very animated. “It had feathers and the color must have been an L or an M. I’d never seen anything so dark.

“It was dirty. It had little cracks in it.” And then on second thought, she said, “But it also had life.”

“It looked alive. It was vivid. And it was big. In our industry we call a ring like that a matzo ball.”

“Yeah, because it’s big and showy but flawed. Usually older guys go for matzo balls if they’re on their second or third wife. They want flash but don’t want to spend too much money on their women. They’d rather buy themselves a Porsche.”

I pictured this fucked up three-carat matzo ball. For some reason, I felt empathy for it. I imagined it to be like some oversized rescue dog with its speckled, feathered fur and sallow coloring. Maybe it didn’t have back legs and it rolled around with a cart. It’d answer to “Matzo Ball” and wag its little L or M colored tail. Then it’d wheel over to me with those big sparkling eyes, it’s drooping tongue slipping out of it toothless mouth—

“Of course, there are the good guys,” Stephanie broke my matzo ball reverie, “They mostly bring their future wives into the decision-making process. But you’re a writer. You don’t want to hear about the good ones.”

Women can be just as bad. My friend Amanda used to work at an office where it seemed all the women got engaged at once. One day a woman came into the office crying.

“What’s wrong?” Her co-workers all said. “Did he break up with you?”

“Then what’s wrong?” All the women asked.

All the women gasped. How could he? Did he even love her?

In the bathroom, they gossiped and eye-rolled, “I can’t believe she even accepted his proposal.”

Where do women get this crazy fantasy that a knight in shining armor will swoop in to rescue this said damsel in distress, only to treasure them and adorn them in diamonds forever. Oh wait, let me guess, mass advertising all over America?

My friend Randi just told me Zales has a princess engagement ring line. I mean, it would be kind of cool to be a real life princess, but how many real life princes are single and ready to mingle?

Zales’ engagement ring line includes Cinderella, Snow White, Rapunzal, Tinker Bell, Belle, Ariel, Jasmine amongst many others and to their credit, they’ve got villains like Ursula and an Evil Queen. If anyone from Zales is reading this, I’d like to request the Joan of Arc ring, which I’d wear on my middle finger.

Speaking of exes, I ran into another ex, Joe, at a screening. Exes are like lessons. They keep piling up. He looked at my naked finger and said, “Aren’t you’re engaged?”

“But didn’t you just write a column about how happy you are?”

“Thanks,” I said, grossed out. Because clearly, in his mind, that was my worth.

Life has a way of surprising you. It can bring you to your knees or bring about the most unexpected of joys. As Madonna said, “Life is a mystery.”

Love is tender, but status symbols suck. Diamonds are forever but sometimes people break up. Or they live longs lives together and one day, they don’t wake up. Then diamonds sit in safes, or in the bottom of underwear drawers, or they get repurposed or resold—a onetime symbol of enduring love.

So what about love? Money buys nice things like diamonds, but it can’t buy love. Even in the trenches of grief for love lost, when the memory of his love seems just a murmur, love is always there, within you, like a fucking heart beat. Love is constant-even when you wish it’d just go away. Love never gives up on you and if it does, that’s not love.

My friend Jes says objects are just things until there is an intension behind them. Engagement rings may be a sign of bondage or a sign of togetherness.

Jes asks, “Are you putting on shackles or are you proud to be with your person?”

“What is this?” Jes holds up a rubber band.

“What’s this?” Jes puts the rubber band around her wrist.

“What’s this?” Jes makes a slingshot.

“What’s this?” Jes throws the rubber band to the ground.

Yesterday’s promise can become today’s trash. A diamond engagement ring is a promise and promises can be broken. But not love. Love is a conviction. Love is courageous. Love is a leap of faith.

And so what if romance goes terribly wrong? Sometimes you have to fall to realize love will always catch you. Because love is not outside of yourself, it’s a state of being. And that diamond ring on your finger, whether it’s big, small, bright or dull, is just that, a diamond ring 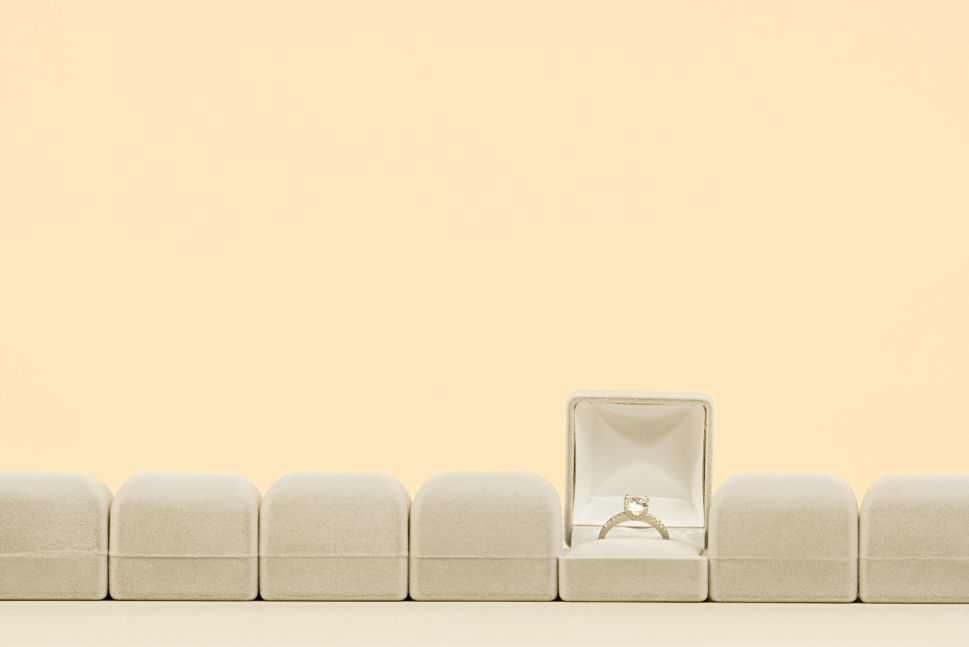