Back in the fall of 2018, when Facebook was drowning in the hot of the Cambridge Analytica scandal, Britain’s former deputy prime minister Nick Clegg was approached about a lucrative job opportunity—to be Facebook’s new head of media relations and help Mark Zuckerberg repair the social media giant’s broken image.

It was a difficult job, not only because both Facebook’s reputation and its stock price had hit rock bottom at the time, but also because Clegg, an outspoken Facebook critic himself, had to convince himself to root for the company in the first place.

SEE ALSO: What Breaking Up Facebook Would Actually Entail

In a new interview with the UK’s New Statesman this week, Clegg opened up about his personal struggle before accepting the Facebook job, including a few thorny exchanges when he first met CEO Zuckerberg and chief operating officer Sheryl Sandberg. It was Clegg’s first print interview since he was appointed as Facebook’s vice president for global affairs and communications in October 2018.

“Your fundamental problem is that people think you’re too powerful and you don’t care,” he reportedly told Zuckerberg when he flew out to California to meet the entrepreneur for the first time. “Yes [that’s] totally understandable, I get that,” Zuckerberg replied, according to Clegg.

He was also unafraid to be honest about how he’d like to be managed under Facebook’s power duo. “I’ve spent the last 20 years working and being shouted at, and I don’t feel like doing that again,” Clegg said to Sandberg in an early conversation, he recalled.

Before accepting the job, Clegg even sent a personal letter to Zuckerberg and Sandberg to remind them one last time as an outsider about the damages Facebook had created for society and its management’s poor remedy.

“I don’t want to get on a plane until you understand where I’m coming from. I think it’s remarkable that you offer this ad-funded business model for free and that you’ve offered your services to Africa and South America and so on. But you know you’ve sullied political and public trust about how Facebook is a guardian of people’s data,” he wrote.

“Social attitudes have changed completely, as far as the holding, aggregation and storage of data is concerned,” he continued. “There’s a profound feeling in Europe that companies like Facebook don’t pay enough tax and that you should contrast your values much more sharply with what’s going on in China. And there needs to be an attempt at least to try to develop a more mature and open approach to regulation, to governments.”

But since then, Clegg has replaced Zuckerberg as Facebook’s apologist in chief, defending the social media giant in front of regulators and press around the world.

For instance, commenting on Zuckerberg’s refusal to testify before British lawmakers about the Cambridge Analytica case last year, Clegg argued that because no UK Facebook data was involved in the breach, “the Cambridge Analytica data, as much as we can tell, is almost entirely to do with U.S. voters, not UK voters. I think kind of conflating the two is not very… helpful.” 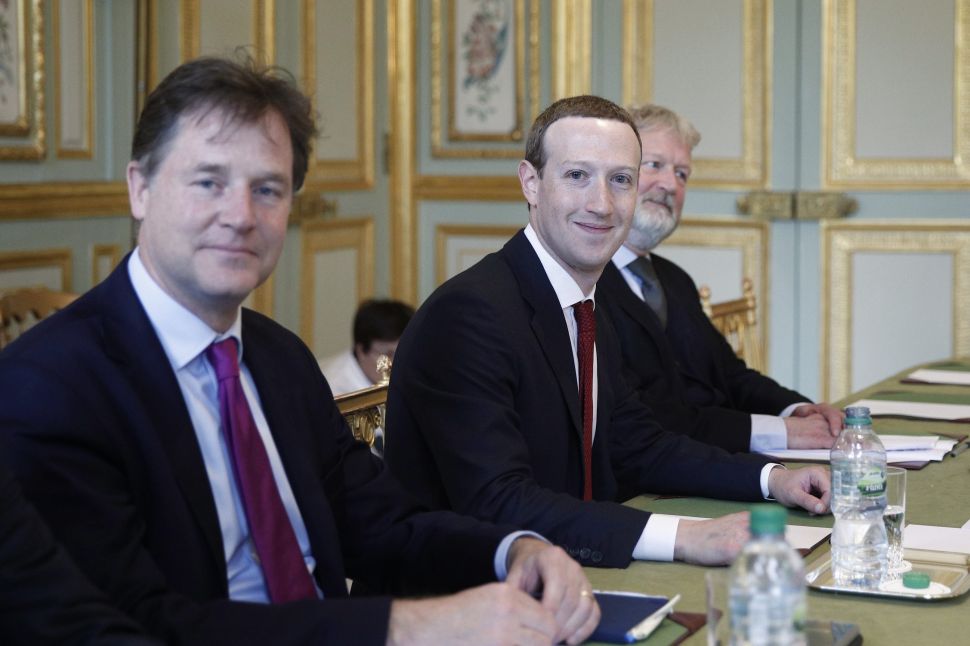