Nothing exposes the inner workings of an industry like a bona fide cultural phenomenon. When Kristen Visbal’s statue Fearless Girl was installed opposite the famous Wall Street Charging Bull in honor of International Women’s Day in 2017, it became evident that a great swath of people can be extremely susceptible to corporate pandering. In other words, folks went absolutely nuts for a defiant young adult rendered in bronze.

Whether or not you find the statue itself aesthetically delightful, as New York City mayor and presidential candidate Bill de Blasio predictably did, it’s impossible to evaluate it fairly without considering its origins. Fearless Girl was commissioned by State Street Global Advisors, the asset management division of one of the world’s most venerable, and problematic, banks. Now, its artist is reportedly locked in a battle to regain control of the work that made her famous.

SEE ALSO: Gloves Are Off in the Legal Battle Over Robert Indiana’s Artworks

Visbal recently told The Daily Beast that her initial agreement with State Street has now made it impossible for her to engage with Fearless Girl in any way without fearing legal retaliation. The poisonous irony of the situation amounts to the fact that she doesn’t feel sufficiently free to “sell, donate or talk about” work that she made herself.

“I was willing to enter into an agreement with [State Street] under the impression that we would be moving forward together in regards to diversity,” Visbal said. Instead, she told the Daily Beast, “I cannot use my work on behalf of women because they are preventing it.” According to the artist, this conflict can be traced back to two opposing trademark applications filed by both herself and State Street mere days after Fearless Girl was installed at its initial location.

Visbal received her copyright easily enough, but her trademark application was delayed, apparently due to the conflict with State Street. Subsequently, the artist says, she was pressured by the powerful bank division into signing a contract which gave State Street final approval on many decisions that have to do with Fearless Girl. For example, Visbal claims that she can sell the work under restricted conditions, but that she cannot use it to promote diversity or to make a political statement—constraints which are arguably the antithesis of what the statue is “meant” to stand for in the first place.

Now, Visbal appears to be locked in a struggle to reclaim her testament to feminist resilience from the boundless maw of unchecked capitalism. “I did not make this work as a brand work for State Street,” she told The Daily Beast. “I was requested to make this as a work for International Women’s Day and I made it for the women of the world.” 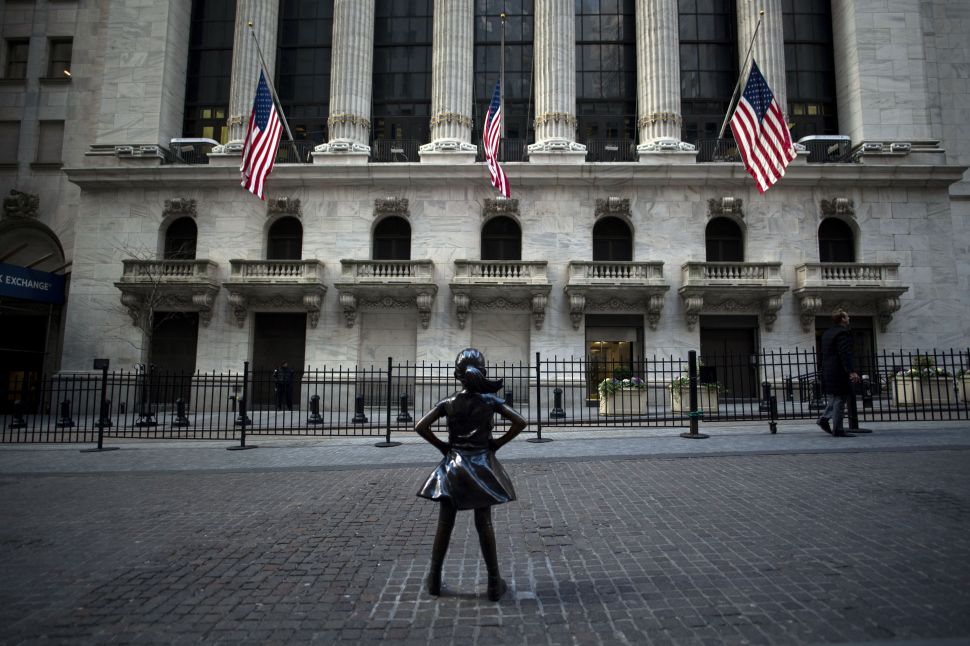