Sunday was Bastille Day. In France, “La Fête Nationale” is less about revolution and more about showcasing the country’s relatively woke military—women can serve in all roles, including in combat and on submarines!—and its snazzy military hardware.

The tanks and the planes and the singing, not to mention the bearded troops marching in front of President Emmanuel Macron, might have been more memorable if it weren’t for the pièce de résistance: a fellow in what looked like a space suit floating around the Champs-Élysees on an actual hoverboard, like he’d been dispatched from the set of the most recent Alien remake (or the raid on Area 51, as one commenter offered).

Men (and in France, les femmes) in uniform with guns on some kind of aerial-powered conveyance has been a thing of military fantasy since the genre existed. And it remains so.

For now, France is not yet fielding a space force, nor is the dystopian vision of a rocket-powered army streaming across Europe and the United States coming to pass. The flying soldier was a just-for-the-parade gimmick—but maybe not for forever.

According to the UK-based Independent, the rocket-soldier was Franky Zapata, a -sports racing champion, as well as an inventor and military reservist. The device—a creation of his, which apparently has its origins in the world of -sports—is called the Flyboard Air, which he is currently trying to market to customers, including the world’s standing armies.

What is it? A jet-powered turbine engine attached to a -ski, sort of. As Gizmodo noted on Sunday, no less than seven different jet turbines guided Zapata over Macron and German Chancellor Angela Merkel on Sunday. Each jet sends flight data to a central tablet that the pilot-soldier uses to steer the thing, and if one jet engine malfunctions or otherwise misbehaves, one or more of the other six have “built-in redundancies” to correct the situation. (If two engines go out, the flight is over and the craft “will make a controlled descent,” according to Zapata’s website.)

What’s best about it is that anyone can fly it; the inventor’s product description claims that it’s designed to be flown “without pilot training.” Novices can learn how to fly the damn thing using its earlier-generation predecessor over .

Very cool, but as of now, the practical applications seem somewhat limited. In addition to running about $250,000 per unit—and making an easy target for, say, insurgents with simple weaponry—as we said, the Flyboard is powered by jet turbines. Sort of like the conundrum of crossing the desert, the problem with jet engines is that they are extremely fuel-thirsty—and the more fuel you carry, the heavier your craft is and the more fuel you need, especially if your craft is not aerodynamic and not cruising at an altitude with little wind resistance.

And all of that perfectly describes the Flyboard as seen on Sunday. At the moment, the furthest a Flyboard can travel without refueling is four kilometers, as per Zapata’s website (and this is with a 100-kilogram, or about 220-pound capacity, meaning it could not carry a bulky soldier with gear and guns).

This makes it good for airshows, shareable YouTube videos and showing off at a grand military parade, but not all that great for most military missions, because in addition to having a limited range, the Flyboard is pretty loud—about 110 decibels, meaning it might not be very effective as a vehicle for quick precision strikes.

Zapata’s website says you can fire weaponry while cruising on a Flyboard, but he didn’t try. As Gizmodo noted, he appeared in the parade to be toting an AR-style rifle (which is not what the French military uses) without a magazine (which is something all militaries use, if they want to fire their weapons, which is something an army does).

All of that said, it does look cool! And Zapata is trying hard to sell his Flyboard to the world’s armies. As the Independent reported, the French military has funded his project somewhat, and over the past few years, Zapata has also demonstrated the technology in the United States—which, as President Donald Trump has said, is at least thinking about deploying a new branch of the military, albeit in space, where a jet engine would not be much use.

Even if he never scores a military contract, Zapata will be busy. As the Independent noted, the Flyboard’s next big flight is July 25, when he plans to fly across the English Channel in 10 minutes—a trip that will require him to refuel, in-flight, at least once. But he’ll look cool doing it. 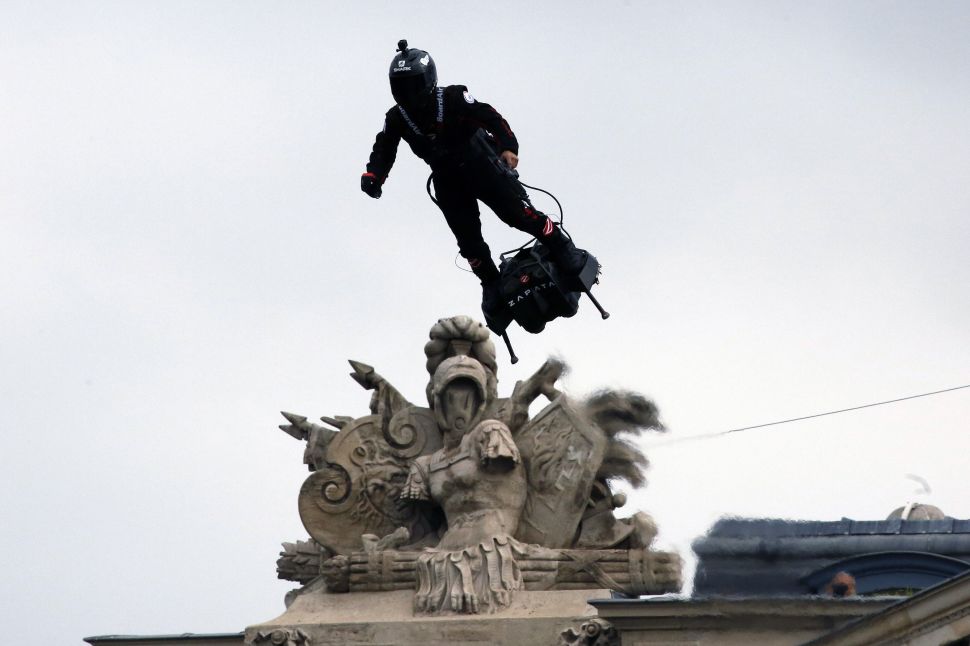