Keith Richards, the notoriously hard-living Rolling Stones guitarist, offers a crisp reply to the standard “Great to have you with us today” welcome he gets from hosts and interviewers. “Great to be anywhere today,” he shoots back with a grin.

In a sense, the opening of this year’s Market Art + Design fair in Bridgehampton suggests an art fair version of Richards’ brand of rock and roll survivalism. Founded by Max Fishko, the art fair impresario who is both son and grandson of New York gallery owners, the fair has endured the ups and downs of the Hamptons art market, that ever-shifting mélange of vacationing New Yorkers, art-loving Long Islanders, party-seeking Europeans and Hamptons socialites and celebs.

The sole survivor of a highly competitive three-fair pack, Fishko’s event—also commonly referred to as “Art Market Hamptons”—opens its ninth season July 5 running through the 7th.

So long, Art Hamptons. Bye-bye, Art Southampton. All hail Market Art + Design. The question of how Fishko has so deftly outlasted his competition isn’t one the modest entrepreneur will answer with any certainty.

“I don’t really know,” he responded genially to how’d-ya-do-it queries. “We’ve put together a contemporary fair that’s approachable, fresh and lighthearted. We try hard to make the visitor experience fun. We don’t take ourselves too seriously.”

The Hamptons art fair is one of five he produces around the country, along with events in New York, San Francisco, Seattle and Houston.

In terms of aesthetics, Market Art + Design is not and never has been an event where you’d hesitate to take your Aunt Mildred. Exhibitors learned early on to feature art that is accessible or decorative, although it’s true some push the envelope as well.

Fishko, 36, knows the market. Having summered in the Hamptons as a youngster, he maintains friends in the area and stays with extended family during show runs. He aims to capture the East End’s celebrated sunlight-and-beach vibe at his fairs, seeking to appeal to both the well-heeled and to those wearing flip-flops.

“People come in shorts and sandals,” noted Fishko. “We’ve stopped carpeting the floor and have fewer talks and panels. We’ve learned to make the fair festive.”

This year, the artist Wendy Letvin will prepare an installation—hangings, paper and aluminum cutouts—for the fair’s entrance. Salomon Contemporary will put sculpture on display near the door. As every year, guests can expect to mingle with artists, many of whom live locally and hang out at the fair.

And with no other fairs to compete with, Fishko has been able to expand, with the number of exhibitors reaching 80 this year, about 10 more than last year.  He also expects to draw more than the approximately 12,000 visitors who came last year. But growing too much bigger would alter the dynamics.  One who appreciates the fair for its relatively small scale is Timothy Yarger, director of Yarger Fine Art in Los Angeles. Next month Yarger will exhibit at Market Art + Design for the fifth time.

“At small regional fairs you can really connect with people and talk about the art,” Yarger told Observer. “At larger fairs, such as Miami, it’s more difficult to develop relationships.”

As the Hamptons art fair scene has consolidated, Fishko’s durable event has become iconic.  After missing last year’s show, Peter Marcelle, the veteran New York and Hamptons gallerist, is back. This year he’s leasing not one booth, but two. “Max,” he said, “is truly the last man standing.”

Market Art + Design runs from July 5 – 7 at the Bridgehampton Museum. 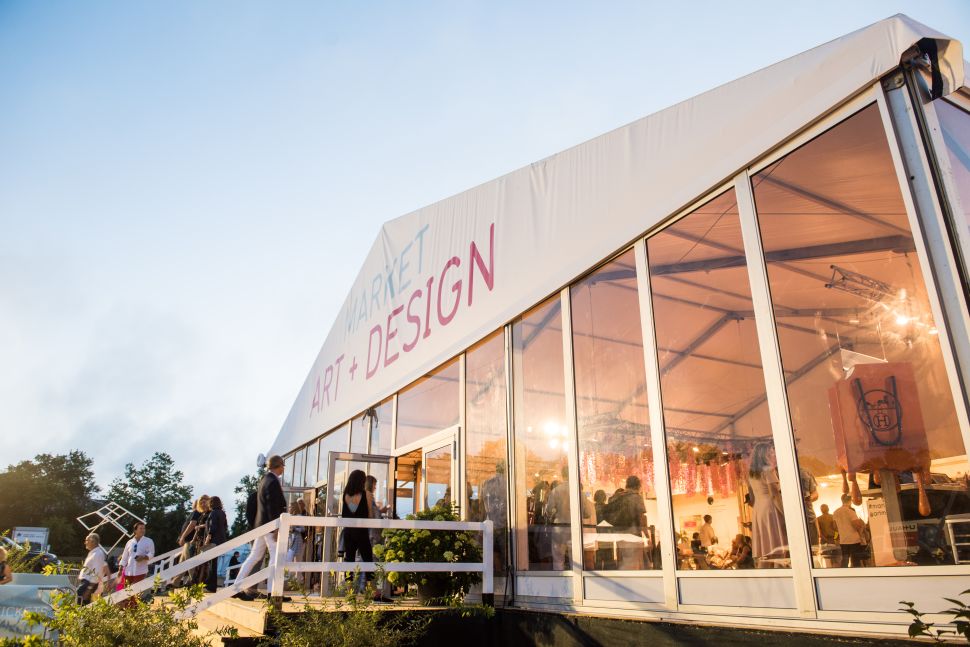