When Wendy Straker Hauser started working as a co-producer on The Handmaid’s Tale, Donald Trump hadn’t yet won the presidency. She was just as shocked as viewers watching the show when they discovered how accurately Margaret Atwood’s 1985 dystopian novel mimicked the politics unfolding in real time. Until I spoke to Hauser, I assumed that some of the events portrayed on the TV series were altered to reflect what was happening in modern-day America. But before it streamed on Hulu, the show was produced and shot months before she or her crew could have a chance to change any scenes to mirror current events.

Those early discernible parallels include President Trump’s dictatorship-esque proposed laws, like a U.S.-Mexico border wall which can be seen with more extremity in Gilead dividing the U.S. and Canada. Similarly, last year when children were being separated from their mothers at the border, fans were quick to point out how the second season of The Handmaid’s Tale showed children, like June’s daughter, snatched from their mothers’ arms and given to ‘elite’ families as they tried fleeing to Canada. The show quickly became a clear indicator of what Atwood predicted America could become, decades ago.

“It felt eerily similar to today when we were developing the show,” Hauser told Observer. She already had a template when she signed on to adapt the book—having read it in college and getting familiar with the characters in advance—but nothing prepared her for the coincidences that presented themselves as clear as day. “In the first season I referenced the fact that Serena Joy had written this book called A Woman’s Place, which felt to some people similar to Ivanka Trump’s approach to feminism and gender roles, which was not intentional at all. But shockingly sometimes art imitates life,” she explained.

As we get deeper into season three of The Handmaid’s Tale, we begin to see what happens to some of the children who were taken away from their parents. June’s daughter, Holly, whom she conceived with Guardian Nick, escapes to Canada in the arms of another handmaid—where they almost drown on their journey. This goes to show what mothers will do to protect their children and grant them freedom, even if that means risking their lives at the border. But as we know all too well, not every child gets the chance to escape. And those who do, don’t always make it across with their mothers in tow.

June won’t leave without her daughter Hannah. Instead, she stays in Gilead to join Mayday, the resistance. Along with other brave handmaids and Marthas, she goes undercover to help women escape. These women were imprisoned in the first place because they had ‘sinned.’

“Having an abortion would be the worst offense possible because all they need in Gilead are children,” Hauser said. Committing that sin will grant the “unwomen” a place in the Colonies—the most brutal punishment of all in Gilead. In modern-day America, women are fighting their own resistance as more states, like Georgia and Alabama, plan to implement near-total abortion bans. It’s no wonder that women dressed as handmaids in 2017 to protest the Republican health care bill in Washington, seen as a threat to women’s bodily autonomy. Similarly, when Trump visited London this year, women took to the streets as handmaids with signs saying, “The Handmaid’s Tale is not an instruction manual,” as well as a quote from Atwood’s book stating, “Nothing changes instantaneously: in a gradually heating bathtub you’d be boiled to death before you knew it.”

As June tries hiding a wounded woman on her way to freedom, in her commander’s basement, I couldn’t help but think of women finding underground abortion clinics—not knowing if they would make it out alive. In Gilead, they may be fiercely pro-life, but they are killing people every day and separating children from their mothers, which clearly draws back to the dichotomy between today’s abortion laws and immigration at the border. Like the Canada in The Handmaid’s Tale, where June’s husband Luke and friend Moira join a protest to rally against Gilead, American states where abortion rights aren’t being threatened are protesting for those who won’t have a say over their bodies if these laws are enacted. In Northern Ireland, where abortion is illegal, women took to the streets with picket signs of handmaid drawings, reading “I am not a vessel.”

“We look at our phones and are shopping for shoes and we see more and more states are dictating the rights of a woman’s body. I remember writing about June on her phone, looking at her social media and something shocking in the news would come up. You take that moment, you absorb it and then you go back to social media or shopping for shoes,” Hauser explained. And you think to yourself: What’s happening in the news or what happened before I was born won’t happen to me.

But history repeats itself. And we’re still fighting the same fight that our ancestors fought to make abortion legal. Until Trump came into power, we weren’t so afraid of Roe V. Wade being overturned. Once he stated that women should be punished for getting an abortion, we started looking up from our phones. Punishment for the mother was never a talking point before when conservatives spoke of abortion. Now, it’s something state governments are considering. The Texas House of Representatives recently considered a bill that would have charged doctors and women who had abortions with criminal homicide, which is punishable by death in the state. Punishment, and protecting rapists over women, is the norm in Gilead, not modern-day America—or is this our new reality?

“We are getting closer and closer to a life in Gilead,” Hauser echoed ominously.

As if things couldn’t get any worse, June joins the Waterford’s in D.C., where life for handmaids is far more intolerable. She’s surrounded by women, silenced with stapled lips and red coverings worn over their mouths. June wears the red mouth covering as she stands on the podium with Serena Joy and Commander Fred, who are about to issue a statement to Canada requesting the return of Nicole (AKA Holly). When she bows on her knees, hundreds of handmaids in the crowd bow in response like blood red dominos. In this season, we begin to see how many women prisoners there are in Gilead. We hear of their professions (chemistry teacher, doctor, journalist) and how their skills can help with the resistance (making explosives, healing the wounded, using their voice). When the handmaids and the Marthas and the sympathetic commanders’ wives band together, we begin to witness the wheels of change turning in motion.

And when Serena Joy’s baby is ripped from her arms (albeit willingly) like June’s daughter was seasons ago, we come to acknowledge that no matter your status in society, all women are fighting for their own agency. Neither Serena nor June have freedom over their own bodies. “It’s a reminder that we’re all women fighting for something. They’re both trying to exercise their power with the limits that they have,” Hauser opined.

It’s not lost on Hauser—who’s also been working on The Bold Type since its inception and is the showrunner for its upcoming fourth season—how similar the modern show is to The Handmaid’s Tale. But it’s difficult for others to see how a dystopian world compares to our present day. “When I tell people that I’ve worked on these two shows, they say that I have incredible range. But the truth is they are not, really,” Hauser explained. “They are both centered around fierce, bold and powerful young women who are fighting for what is right in the world that they live in.” The Bold Type’s Kat may have had a legal abortion and didn’t bear any government punishment, but she still keeps it a secret—her own form of self-punishment—because of the shame it emits.

“The Bold Type accurately reflects where we are today and has a little more optimism and how we can break those barriers. But in Gilead, you’re discarded unless you’re of child-bearing years and you can reproduce,” Hauser said. Through Jane’s decision to freeze her eggs, it’s evident that the women of The Bold Type have more of a choice over their bodies. Still, as we exercise our rights, like the women of The Bold Type, we must also look to The Handmaid’s Tale—and what’s happening in the news—as a reminder of what could be if we stop fighting. 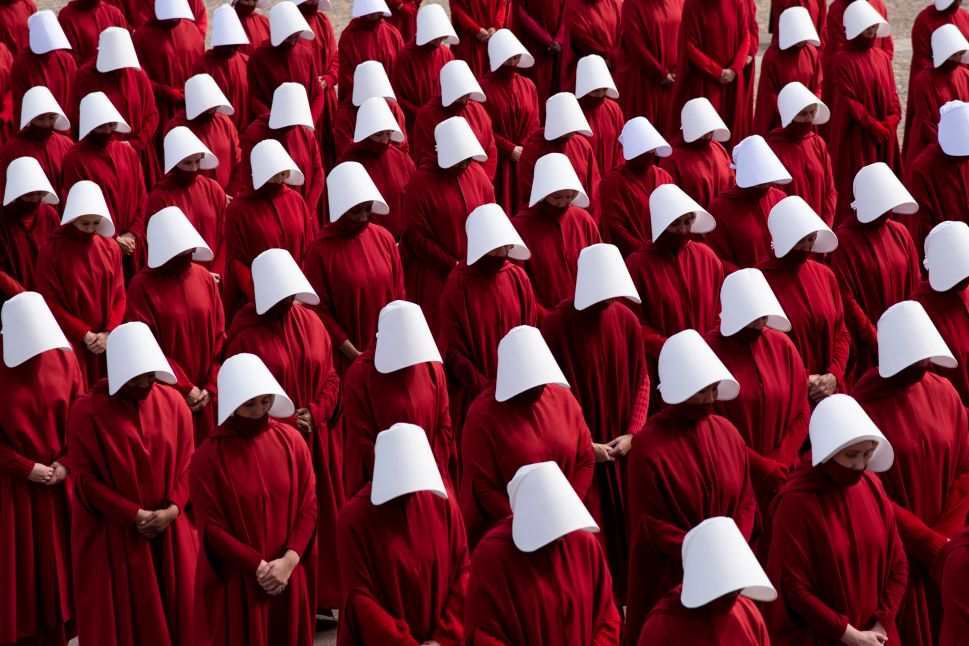