Take the odd couple pairing of Lethal Weapon, the bat shit crazy sport of Point Break, the enjoyably silly suspension of disbelief required for National Treasure and just a touch of Mad Max‘s road rage, and you’ve got Universal’s Fast & Furious Presents: Hobbs & Shaw. Combined, those ingredients coalesce into what is probably the perfect summer movie for the current rock ’em sock ’em Hollywood marketplace. Hobbs & Shaw is sure to light up the audience score on Rotten Tomatoes (predicting at least 85 percent) and, more impressively, launch a new big bucks franchise.

In today’s IP-driven Hollywood ecosystem, the name of the shared cinematic universe has become far more important than the first name on the call sheet. With all due respect to our favorite superhero stars, it’s rare to see those actors successfully open a film at the box office outside of the comfort zones of their comic book dwellings. It’s why we so often associate an actor with one defining role no matter how far they attempt to stretch themselves.

But Dwayne Johnson can’t be packaged that way. He’s The Rock—a brand unto himself. More often than not, he is the launching pad for new film franchises and not the other way around. Across his big screen career, he’s resuscitated sputtering concepts (Journey 2: The Mysterious Island), pulled original ideas to respectable if not downright impressive ticket sales (San Andreas, Central Intelligence), and spearheaded breakout series (Jumanji: Welcome to the Jungle) without ever getting locked into one on-screen identity. Now, ahead of his own superhero franchise in Black Adam, Johnson has helped create a potential new trilogy from the DNA of the Fast & Furious, a property he also helped reinvigorate. No wonder he’s the highest-paid actor in history.

Hobbs & Shaw director David Leitch and writers Chris Morgan and Drew Pearce do their best impressions of John McTiernan (Die Hard) and Shane Black (Kiss Kiss, Bang Bang) in this one. It’s an over-the-top and utterly ridiculous action-comedy buoyed by the fantastic chemistry between Johnson and Jason Statham, with badass contributions from Vanessa Kirby, who should absolutely be playing Catwoman in Matt Reeve’s The Batman. A series of applause-inducing cameos also helps round out the picture in a fun fashion. Hobbs & Shaw is a crowd-pleaser on steroids downing shots of gasoline; it’s juvenile fun in the “let’s cut fifth period and smoke behind the bleachers” kind of way.

And it works because Johnson is a well-rounded modern performer molded toward millennials and Gen Xers. He smirks through one-liners like a prime Bruce Willy, physically imposes like Arnold, and channels the light switch charm of Denzel. But, more importantly, he and his management firm Garcia Companies, as well as his Seven Bucks Productions, have systematically targeted the biggest moviegoing demographic (young males) while proving invaluable to studios as relentless marketers and self-promoters. No one is more committed to stumping for their films overseas than Johnson and co. There’s a reason Henry Cavill also defected to his management team—these guys understand how to attain and leverage broad appeal in the social media age.

Hobbs & Shaw is currently tracking for an impressive worldwide debut of around $200 million. So, in honor of what is expected to be another hit on Johnson’s resume, let’s run through some of his most impressive career box office stats.

The Rock has starred in 19 films this decade. Ten of those movies have grossed at least $250 million worldwide, five crossed $500 million and two made it to vaunted $1 billion territory. His films earn an average of $113.5 million domestic, more than the averages posted by fellow movie stars such as Leonardo DiCaprio ($98.6 million) and Tom Cruise ($99.9 million). Thirteen of his 28 wide releases have scored at least $100 million domestic, and his lifetime North American gross sits at more than $3.4 billion. His 2017 feature Jumanji: Welcome to the Jungle ($404.5 million) is Sony’s highest-grossing stateside film ever, and Johnson boasts two of the 20 highest-grossing films worldwide in movie history.

It’s a safe bet that Hobbs & Shaw will only add to these impressive totals. 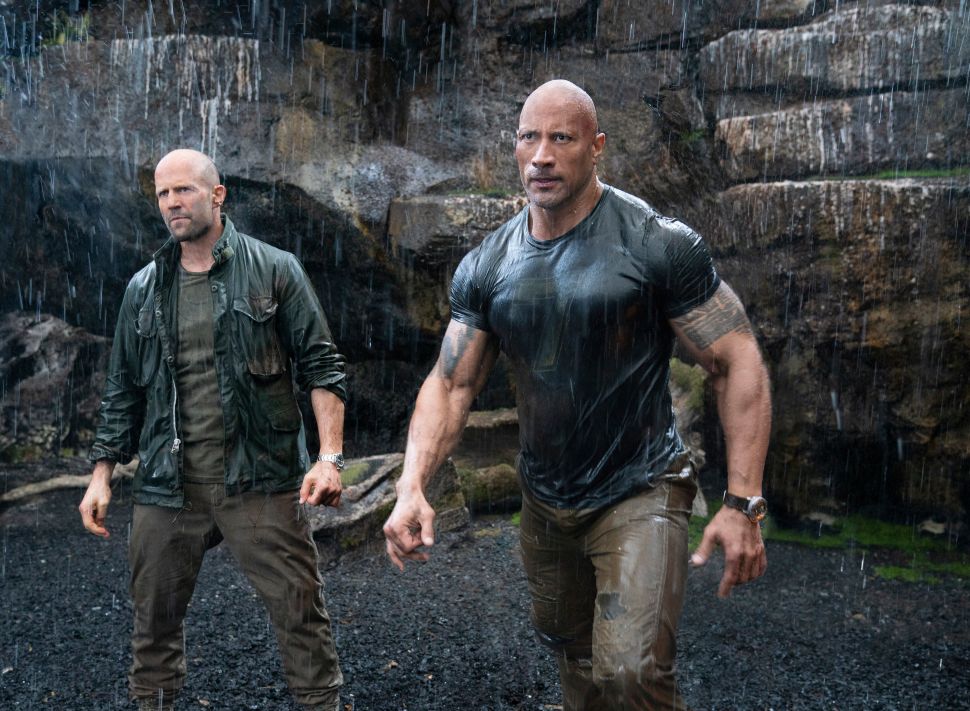