When the now deceased billionaire Ross Perot made a splash in presidential politics in the 1990s, it paved the way for fellow businessman with no electoral experience to win the presidency. In addition to both having ties to the Reform Party, their economic policies, personalities and ability to cut out the media as the middleman and speak directly to the public shows how the Texan enabled Donald Trump’s candidacy, and victory. Yet, Trump also showed that he could learn from Perot.

Two decades before 1996, I had my first encounter with Perot. He had just finished speaking at Florida State University’s auditorium, which was completely packed, and made a great impression on the younger voters. I then headed over to the overflow room, where friends were watching it in another auditorium on television, wishing they were seeing him in person.

SEE ALSO: Can an Independent Win a Presidential Election?

As I opened the door to that auditorium, I turned around and there was Perot. I was holding the door open for him. I reached out and shook his hand. One of his campaign workers, aghast, said, “You just shook his hand… he never shakes hands.” Perot then proceeded to give an impromptu speech to the appreciative crowd who could now say they had seen him. I learned two lessons: Perot was willing to change, and he was smart enough to visit those who were not fortunate enough to see him in the first place. Both were lessons that politicians like Hillary Clinton never seemed to learn.

Lessons From the Texas Maverick

When the former EDS (Electronic Data Systems) CEO and creator of Perot Systems announced his candidacy, Americans were reeling from a recession that began in 1990. GOP President George H. W. Bush had falling approval ratings after his Persian Gulf War success, and Bill Clinton, the Democratic Arkansas governor, was better known for his scandals than his policies.

Perot took a shot at the North American Free Trade Agreement (NAFTA). Calling it “the giant sucking sound” of jobs heading from the United States to Mexico, the tiny Texan struck a chord. That’s because Bush and Clinton both backed NAFTA, and Perot appealed to the economic nationalists who Patrick Buchanan had unleashed in the Republican Party primaries and who had flocked to California Governor Jerry Brown during the Democratic Party nomination battles. In fact, Perot brought on GOP strategists, like Ed Rollins from the Ronald Reagan campaign and Hamilton Jordan from the Jimmy Carter campaign, for Democratic Party input.

Perot had little enthusiasm for conflicts in the Middle East, a clear contrast to Bush, while Clinton stayed quiet, hoping nobody would bring up his desire to avoid participating in the Vietnam War. And he was very much opposed to business as usual, despite bringing on professionals from both parties. It was an anti-incumbent mood, and Perot was the beneficiary.

Clearly, Trump has been able to tap into the Perot phenomenon. Many of his supporters are older voters who remember Perot well. He’s also been able to play the economic populist, campaigning against NAFTA, but also free trade in general, as well as immigration, which was an issue that Pat Buchanan popularized in 1992. And Trump’s stand on Syria, North Korea and Iran show that he has much less of the enthusiasm of the traditional Republican, and hawkish Democrat, for war.

The Texan billionaire also chose to avoid the skeptical media to get his points across to the people. While Trump has his Twitter account, Perot became famous for “infomercial” style television spots in which he used simplistic graphs and charts to explain his message to the American people, without reporters or pundits picking apart his arguments. His speeches were focused on supporters, avoiding the press conferences that traditional candidates strangely seem to relish. And he won the first debate against Clinton and Bush handily, holding his own in the other two.

So why didn’t Perot ever win a presidential election?

How Perot Missed Opportunities That Trump Didn’t Whiff On

Unlike Trump, Perot made a few mistakes that doomed his candidacy. While running close in a three-man race, Perot abruptly quit the contest as Bill Clinton surged, thanks to the Democrat’s smart choice for vice president (Al Gore), a book detailing his positions (Putting People First) that showed more substance than Perot’s graphs, and a flap about whether Perot used private investigators to track Bush family members.

Perot reentered the race late in the 1992 election, but the damage was done. He still received an impressive 19 percent of the vote. Though he didn’t win a single vote in the Electoral College, evidence reveals that it was because his support was spread across the country and not consolidated in one region (like George Wallace in 1968) or a single state (like fellow economic populist Robert M. LaFollette in 1924).  In 1996, Perot stayed relatively quiet, finishing off Colorado Governor Dick Lamm in the Reform Party “primaries” after cries of “foul” by Lamm. He waited until late in the 1996 election to make his big push and lagged in the polls and election returns as well.

Trump almost made a similar blunder, skipping the Iowa Caucus debate in 2016 and losing narrowly to Ted Cruz. But Trump reentered the fray shortly thereafter and performed much better in New Hampshire and South Carolina, ironically finishing off Jeb Bush. While Perot preferred to wait out elections until he could jump in at the end, Trump was typically early in fighting for the nomination, or in kicking off his reelection bid.

Perot also had poor choices for his vice presidents. In 1992, he picked Admiral James Stockdale, a good man but whose debate performance was so epically dismal that it kept Saturday Night Live’s spoofs of Perot and Stockdale as the most talked about subject. For 1996, Perot chose the brainy but forgettable economist Pat Choate, who brought little to the ticket. Making peace with Dick Lamm and getting him on the ticket, or putting another candidate on the ballot with more electoral and debate experience, would have helped.

Trump may not like Mike Pence very much, but his running mate was valuable in demonstrating his legislative experience (as an Indiana congressman) and executive experience (as Indiana’s governor).  Many Republicans I know who were skeptical of Trump’s experience warmed to Pence. The Indiana governor won the vice presidential debate against Virginia Senator Tim Kaine from the Democratic Party and seems a good bet to remain as Trump’s VP for his reelection bid.

In conclusion, Trump was able to borrow from Perot’s policies by making a splash with the American people, with the focus on trade and opposition to expensive wars. But the New York business tycoon learned to jump into the race early, and hang in there until the end. Picking an experienced running mate also helped Trump. These are important lessons that any candidate with a thin political resume, running as an outsider, challenging the status quo, must know. 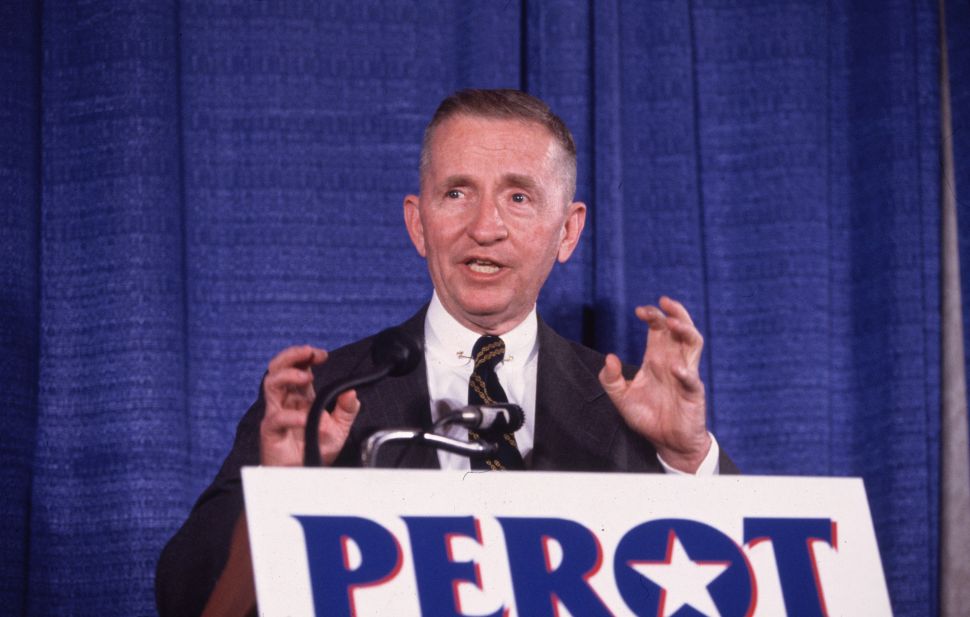