Jesse Eisenberg is a rare, inquisitive type who, upon being interviewed, is the one who starts asking the questions. As soon as I say hello, he asks me about my accent and where I’m from. (It’s Suburban Philadelphia, a lilt I thought I’d lost.) He wants to know more about where I grew up. (It was lower Bucks County, which he knows well—it’s home to his all-time favorite band, Ween, which I’ve never heard of.) We eventually shift to movies, and he asks if a lot of the films I’ve seen this year have had forced dialogue or forced cultural commentary. (Yes.) That’s not the case at all, however, with The Art of Self-Defense, a beautifully streamlined dark comedy about fear, masculinity, discipline and morality with Eisenberg in the lead role as timid-turned-iron-willed Casey. For this highly curious actor, Casey is a marvelous fit, and Eisenberg jumped into the project just like he did our interview: He took himself out of it.

“I wanted to feel like I was giving myself over to the oddity of the film’s tone, rather than trying to please myself with what I like to do normally,” he says as he navigates Manhattan’s busy sidewalks. “If a movie’s unusual, I want to give over to that completely. The thing I probably like the least is when a role doesn’t feel specific—when you feel like you’re playing a generic person, which sometimes happens. Sometimes you wind up in roles and you realize, Oh, there’s really no specific style. But the character in The Art of Self Defense is more specific than probably anything I’ve ever done, in the sense that the director, Riley Stearns, was asking me to be emotionally removed, in an almost pathological way.”

SEE ALSO: Danny Boyle on the Movie He’d Remake if It Disappeared Like in His New Film, ‘Yesterday’

In Stearns’ film (his second feature following 2014’s Faults), Casey is an immensely introverted ball of nerves. His life—from his petite dachshund to his keep-your-head-down cubicle job—is the daily-grind equivalent of a padded room, constantly buffering the oppressions of toxically masculine norms. No matter the attempt, he can’t make small talk with his macho co-workers, and he can barely shop for groceries without feeling lesser than—or even targeted by—other men. One night, after he is attacked and brutally beaten by masked bikers, something snaps, and Casey turns to a local karate club run by Sensei (Alessandro Nivola), who proceeds to butch up his new pupil at all costs.

“I think people are interpreting the movie as a commentary on current discussions of masculinity, but I think it’s a good movie not because of that stuff,” says Eisenberg, who emphatically sings Stearns’ praises many times over. “In fact, I think that stuff is either unintentional or unconscious. The movie is a brilliant presentation of a unique world and unique characters, and it coincidentally overlaps with conversations in mass culture about the place of men and masculinity. I think the movie is good because it didn’t intend to be part of that discussion in an explicitly political way. That’s just a  perk. I imagine that if Riley was intending to be part of some contemporary conversation, the movie would not be good. As an audience, we would be on to it—the audience would unconsciously resist some kind of explicit message, as they always do.”

This is coming from the actor who’s probably best known for his Oscar-nominated portrayal of Mark Zuckerberg (arguably Casey’s polar opposite) in The Social Network, 2010’s prescient biopic that offered plainspoken, yet effortless, commentary on greed, elitism, loneliness, genius and the modern framework of success. He may have wound up in certain roles that felt generic to him, but as an actor, Eisenberg, 35, generally makes smart, commendable choices. (See also: The Squid and the Whale, Holy Rollers, Zombieland and its upcoming sequel, which Eisenberg applauds for “its smart, clear and specific humor that [he] could indulge in while also appreciating its parameters.”) Did his upbringing instill him with a refined palate? Maybe. When asked if he’s listened to a lot of metal, like Casey does, per Sensei’s demand, Eisenberg says, “No, I grew up listening to Andrew Lloyd Webber.” He more likely inherited a cultural sensitivity that links back to that curiosity of his.

Born in Queens, but raised in East Brunswick, N.J. (not far from my native Bucks County), Eisenberg is the son of two teachers. After attending performing arts school in New York, he went on to study anthropology, contemporary architecture, democracy and cultural pluralism at the New School in Manhattan. A heightened consideration of character—and choice of characters, for that matter—was perhaps inevitable. Ditto an appreciation for rarefied worlds and specialties, which he shares with Stearns. (Faults was about a cult, The Art of Self-Defense has major cult-ish attributes, and Stearns himself practices jiu jitsu and takes part in competitions.) “He doesn’t want to show a cynical or comic attitude toward karate,” Eisenberg says of his director. “For years, that’s been his main passion. I think that’s part of what makes the movie more complicated. It’s not a satire about something that a filmmaker thinks is silly or a joke, and he’s not using karate in a simplistic way as the backdrop to these ideas on masculinity. He very much reveres karate, which just enriches the conversation surrounding the film’s themes.”

Eisenberg also practiced karate to prepare. Along with his co-star Imogen Poots (the film’s foil to all the bros in the room), Eisenberg did a three-week training course with stunt coordinator Mindy Kelly, whom the actor calls “one of the best in her field.” And again, he had to dive in, and leave familiar notions of self behind. “The reason I loved it is not because it made me good—I’m not good—but because of the discipline of it,” he says. “I would try and make jokes all the time and she would yell at me, because you’re not supposed to talk. In a way, it helped me get into the mindset of this person who is very easily persuaded, who likes authority, and who likes following rules. I was learning something new, so I had to commit to various kinds of things. I had to commit to being a dutiful follower of an authority figure. The character is very obedient, and I had no choice but to also be obedient to my karate teacher.”

And if that’s not method enough, Eisenberg, like Casey, has also been mugged. “I was similarly attacked on the street,” he says. “I was on my bike and some kids attacked me. It didn’t end as horribly as it does for Casey in the movie, but it happened. I was about 24. I was in a play, and every day I had to put on makeup to create a black eye for the character. Then I actually had a black eye, and stitches, in the exact same spot. If anything, it was like I was contributing to the play more authentically. I wasn’t traumatized or anything. It was mostly humiliating. And for someone like Casey, who’s humiliated already in life, he’s predisposed to that feeling.”

All of this adds up to one of Eisenberg’s greatest performances, and one of the year’s better films, which was shot in a mere 21 days, but is executed and art-directed in ultra pristine fashion that’s on par with its pitch-dark humor and shrewd subtext. It’s also part of Eisenberg’s packed portfolio of recent work. In front of the camera, he also starred in The Hummingbird Project this year, and he’s otherwise kept busy as a writer. His Off Broadway play, Happy Talk, starring Susan Sarandon in the leading role, ran from April 30 to June 16 at New York’s Pershing Square Signature Center, and garnered acclaim from The New York Times and The Hollywood Reporter. His new book, The Ziegfeld Files, is due to Audible in August (yes, it will be read by him).

And along with his wife, Anna Strout, with whom he has a baby boy, and whom he met way back in 2002 while shooting The Emperor’s Club (Strout was on set as a crew member and assistant), Eisenberg likes spreading the creativity around—preferably where it’s most needed. During our interview, he’s stopped on the street by another famous actor, and they briefly chat. When asked if he often talks to peers in the industry about collaboration, he says, “Well, I recently produced a short film for my friend, and my wife [who’s known for philanthropy] works with about 100 schools in the five boroughs, with theater kids, bringing arts to them. Helping out people who are struggling to get their things done in an industry that doesn’t really have a place for them, as opposed to collaborating with other people who already have a leg up, feels more worthwhile.” As for the rest of the day? “I have to go babysit,” he says, before adding, “Oh wait, it’s not called babysitting; it’s called being a father.” 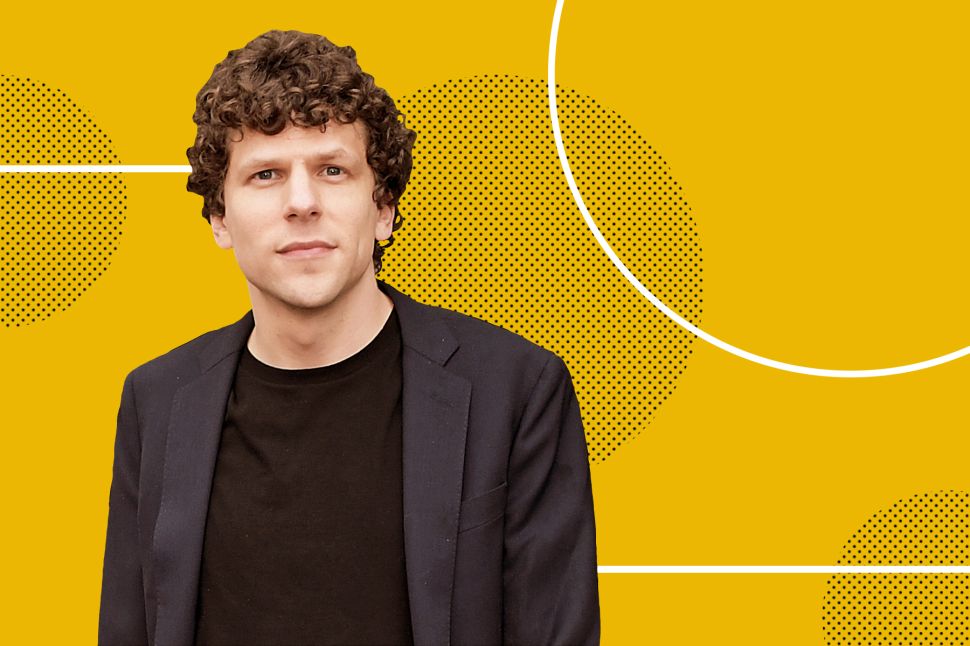