Those who take car services or taxis to New York City’s airports with a small child are faced with a dilemma: either carry their own car seat to ensure a safe ride, lugging it through the airport and beyond, or dispense with the car seat and hope, maybe pray, for a smooth ride with no accidents.

Entrepreneur Nelson Nigel zeroed in on this lack of safety and convenience for families traveling to and from airports and launched Kidmoto Technologies in 2016. The startup allows Kidmoto customers to book a sedan, minivan or SUV through Kidmoto’s app or website, requesting one to three child safety seats and if they should be installed rear or front-facing. A vetted driver arrives with the car seats installed to the customer’s specifications.

Kidmoto currently operates in New York City, Philadelphia and Orlando, specifically to and from airports and cruise ports; Charlotte is slated to launch by the end of July. Additional roll-outs in 10 U.S. cities are scheduled for next year.

Prices vary, but a sedan from the Upper West Side to JFK Airport with one car seat could cost approximately $130, a minivan $162 and an SUV $206, including tip. Customers, including many international travelers, often book drivers several weeks to months in advance.

Nigel, who sports a squiggly mohawk and angular glasses, is originally from Guyana and immigrated with his family as a kid. He operates the 12-person Kidmoto team out of out of the NYDesigns incubator space in Long Island City.

The Kidmoto office is currently a little cramped with eight summer interns from the New York City’s Career and Technical Education Program, working on their laptops. However, the airy communal area has sufficient space for the omnipresent startup ping-pong table.

After studying cultural anthropology at Queens College, Nigel worked in the real estate and mortgages industries until the 2008 financial crises hit. He became a taxi driver, which he calls one of the top two jobs he’s ever had, which gave him time and money to eventually try to launch a business creating technology for government agencies.

Nigel took a break while the faint ping-pong ball volley could be heard in the background, to explain the launch of Kidmoto, why he takes high school interns and how being an immigrant fuels the way he works and runs Kidmoto.

Kidmoto only operates to and from airports and cruise ports. So if a vacationing family is downtown and they want to visit MoMA, they can’t use the Kidmoto app?
No. Our drivers get booked weeks in advance. It’s a premium service, and it takes a time and skill to install the car seat correctly.

That’s a very specific business.
It’s like going into business as a soup shop, but only selling chicken soup. [laughs] But I saw the need and thought, “Well, maybe I can have chicken soup shops all over America.” Of course it was hard to get off the ground, but now we are that chicken soup shop with customers. And they are repeat customers.

Do drivers buy or rent the car seats? How does it work?
I give drivers the seats, later we deduct some money from their check to cover the cost of these seats, which is refundable if they ever want to give the seat back.

There are about 100 car seats out there now, I buy Diono car seats, a Seattle-based company. They fold up, so it’s easy for drivers to carry and store in their trunk.

Are Kidmoto drivers Uber drivers? Or yellow taxi drivers?
I think every driver in America is probably somehow under the Uber platform.

You drove a taxi after the financial crises in 2007, 2008 and you loved it. Why?
After moving to the U.S., I lived in Corona and Flushing, Queens. I didn’t know five percent, even one percent of the city; we [New York City residents] take the city for granted.

When I was driving, I was meeting folks from all over the globe and the city became a whole new world. We have the greatest urban planning, architecture and engineering—and, of course, food, especially in Queens. I did that for about three years, driving for Uber and black cars as well.

Did that experience give you the idea for Kidmoto?
When I drove I had no idea how to install a car seat. Black car companies, taxis, they do not pay any attention to the children. Even Uber, Lyft, etc. When people are traveling with children, they have a ton of luggage and they don’t want to travel with car seats or have the headache of installing it. I saw that. I had years of business development experience, so I just started working hard. I was in the Queens College Tech Incubator all day long like a madman.

You immigrated to the U.S. from Guyana with your family as a kid? Do you remember what that was like?
I can’t. I was hit by a No. 7 express train when I was almost 13 years old, so I don’t have any memories prior. I had brain surgery.

Wow, that’s intense.
Yeah, I was in a coma for two weeks, in the hospital for three, four months. I rarely tell people. I don’t see that as something to hold me back.

Is there anything about being an immigrant that has shaped Kidmoto?
Immigrants know how to evolve and to adapt. I have a different work ethic; I just have to work. That’s not a very popular thing these days! [laughs]

Did you get any venture capital investment for Kidmoto?
No. No one really helped, no friends and family, it’s OK, I just kept moving on. I have gotten loans from BCNA [Business Center for New Americans], I have had a long relationship with them extending seven years I think, for other businesses. All of which, you can say, failed. Creating technology for government agencies was not as fun as Kidmoto. I tried to make their jobs easier, but they don’t want it, they just want the retirement, their pensions. While people really appreciate Kidmoto.

How do customers learn about Kidmoto?
We do different types of marketing, reaching people on many different levels and channels in Russia, Kazakhstan, Chile, Portugal. We have a tremendous amount of folks coming in from Scandinavia, whether it’s Helsinki, Stockholm, Oslo; also Iceland.

You took on eight summer high school interns, why?
My parents were poor immigrants, they didn’t know much about this country and couldn’t guide me towards a career, I paved my own path.

There is a huge pool of employers who need the talent that I’m teaching these young students. This is hands-on growth hacking, real work, they are learning how to use tools. We were just talking about how Instagram changed its algorithm; we’re noticing how things work.

I see these young students and they’re being led down the wrong path: college. I’m not anti-college, but there are alternatives. Students are taught that if you go to college, life is going to be perfect.

Academia can’t keep up with technology. Some of these interns are just out of 10th grade, and they’re learning analytics on a very high level, they grasp this technology within a couple of days. Meanwhile, college graduates are learning something out of a textbook that was written 10 years ago.

People, no matter what age, who adapt, learn new skills are going to get jobs. The people who don’t adapt, they’re the ones who are… [laughs] complaining.

Everyone who says, “Oh, the way it was before…” [in a longing voice]. Well, this is life, and times change. You can’t have what was 10, 15 years ago. We’ve never even heard of the jobs that will come out next year or the year after.

They are getting real life work experience here.
I’m always telling them, keep thinking big, shoot for the stars because if you land on the moon, it’s not a bad place to be. Like Obama says, if you keep hitting your targets, you are not setting them high enough.

As an immigrant, we are not taught that. We’re taught to set our standards very low. Look at companies like Tesla, Google, WhatsApp, immigrants have always changed the world. 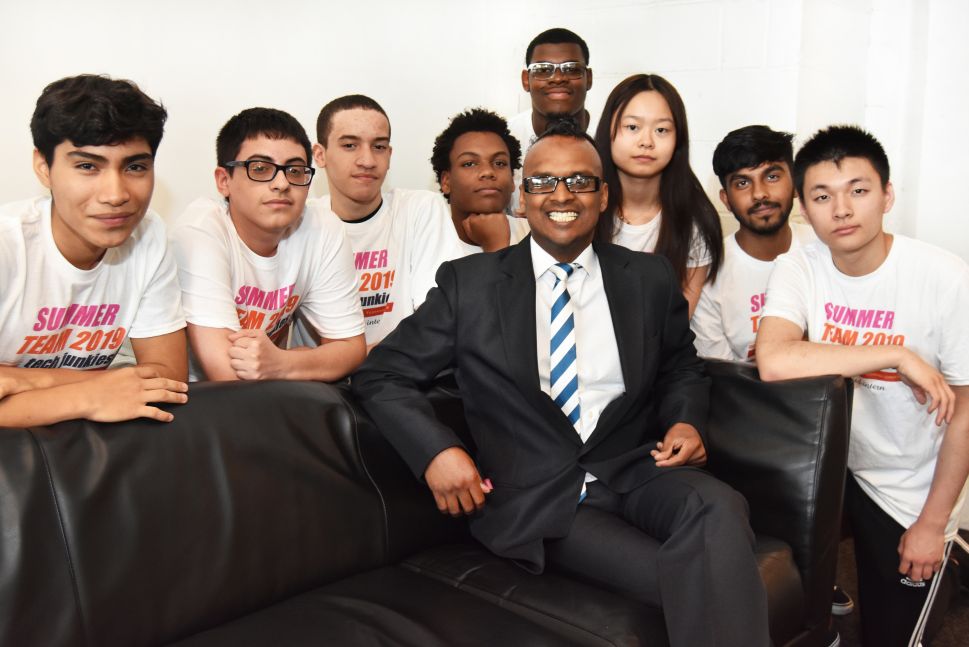