A magician never tells his trick, a writer never discloses his muse and an artist never reveals his process. But, when you’ve been dead for a couple of centuries, such liberties are taken out of your hand, as Leonardo da Vinci will soon find. To mark 500 years since his death, the Metropolitan Museum of Art will be displaying his incomplete masterpiece Saint Jerome Praying in the Wilderness, offering a rare glimpse into the artist’s mind.

The painting depicts Jerome (A.D. 347–420), a major saint of the Christian Church, in a later period of his life that he spent as a hermit in the desert. Sprawled out in front of the aged saint is a tamed lion, a central figure in the story of Jerome’s life. The intended destination of the painting and who it was commissioned by remains unknown, but the presence of fingerprints in the upper left of the unfinished artwork, which can be seen on close inspection, make it an important piece in da Vinci’s oeuvre. It’s one of only six paintings that have been attributed without a doubt to the Italian maestro.

SEE ALSO: Looking Back at the Images of Poverty that Sparked a Firestorm in the 1960s

Da Vinci began working on Saint Jerome Praying in the Wilderness in 1483, and continued to rework the piece until his death in 1519 without ever finishing it. The painting was only discovered by chance and bought by Napoleon’s uncle, Cardinal Joseph Fesch. The manner of discovery only furthers the shroud of mystery around this painting. Legend has it that the cardinal discovered the painting in two parts—the lower half in the shop of a Roman second-hand dealer who used it cover a box and the upper half being used to cover a stool in a shoe maker’s shop.

The painting, which has been loaned to the Met by the Vatican Museum, provides viewers with an insight into da Vinci’s creative process. The artwork isn’t quite a finished piece, as is evident from the silhouette of the lion, which hasn’t been modeled beyond its outlines. The attention to detail in creating an anatomically correct drawing of the saint’s body points towards the artist’s fascination with his subject, which only became more pronounced in his work. As per the Met press release for the exhibition opening, Leonardo used his fingers to distribute the pigments and create a soft-focus in the sky and landscape of the painting.

This is the second time that the Met will exhibit the da Vinci painting—the last was 2003, when the painting was displayed along with numerous other da Vinci sketches and studies. But this time, Saint Jerome will be the only thing hanging in the gallery in which it is displayed. Indeed, the exhibition is made up entirely of this one image. “The painting will be displayed in a gallery by itself, starkly illuminated within an otherwise darkened space in order to heighten the picture’s contemplative dimension, which Leonardo intended,” the Met explained in a statement.

The exhibition opens to the public on July 15, and will be on display until October 6. 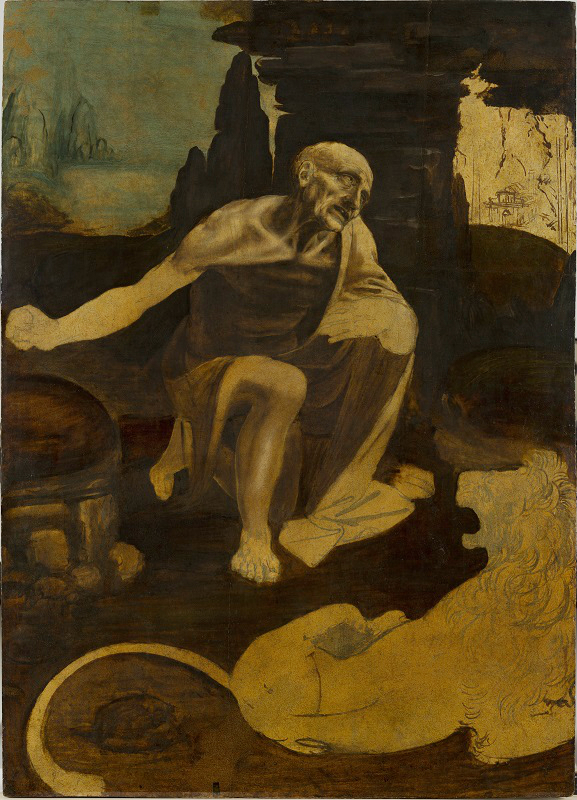