According to photographs posted this morning on an Instagram account managed by the prescription addiction intervention group P.A.I.N., plaques and signs bearing the Sackler name have been removed from the walls of the Musée du Louvre in Paris. The Sackler family collectively built their fortune via the ownership and stewardship of Purdue Pharma and Mundipharma, and used that fortune to donate lavishly to artistic institutions. Both aforementioned companies were instrumental in the development, marketing and distribution of the extremely addictive painkiller OxyContin, a drug that’s synonymous with the devastating opioid crisis that now grips the country and the world. According to the New York Times, signs in the Louvre that formerly bore the identifier “Sackler Wing of Oriental Antiquities” have been taped over, and a commemorative plaque detailing the family’s financial contributions to the museum has been taken down altogether.

Earlier this month, P.A.I.N. staged a protest, led by photographer Nan Goldin, outside the Louvre to demand that the Sackler name be removed. Twelve rooms in the museum bore the name, because the family donated a sizable amount of money (10 million francs) to the institution in 1997. “Museums and cultural institutions must maintain their integrity,” P.A.I.N. said on Wednesday in a statement made to Artforum. “They should not bear the name that is synonymous with the opioid crisis. Our museums belong to the artists and to the public, not to the donors. Those of the institutions who have refused future donations from the Sackler family, we commend you for taking the first steps. Now it is time to take the next step and take down the name of this criminal family.”

SEE ALSO: Next Year’s Winter Show to Feature an Exhibition of Masterpieces by El Greco and Velázquez

However, it appears that the Louvre isn’t exactly following the example of the Guggenheim museum and the Metropolitan Museum of Art, both of which have announced that they will no longer be taking donations from the Sackler family. “The Theresa and Mortimer Sackler Foundation sponsored the renovation of the rooms dedicated to Persian and Levantine Art in 1996-1997,” Nadia Refsi, head of the press division of the Louvre, told Observer via email. “Since then, the Sackler Foundation has not made any other donations to the museum. On October 10 2003, the Musée du Louvre’s Board of Directors voted to limit the duration of honorary room naming to 20 years. In accordance with the Board’s decision, as this sponsorship exceeds 20 years, the rooms no longer bear the Sackler name.” 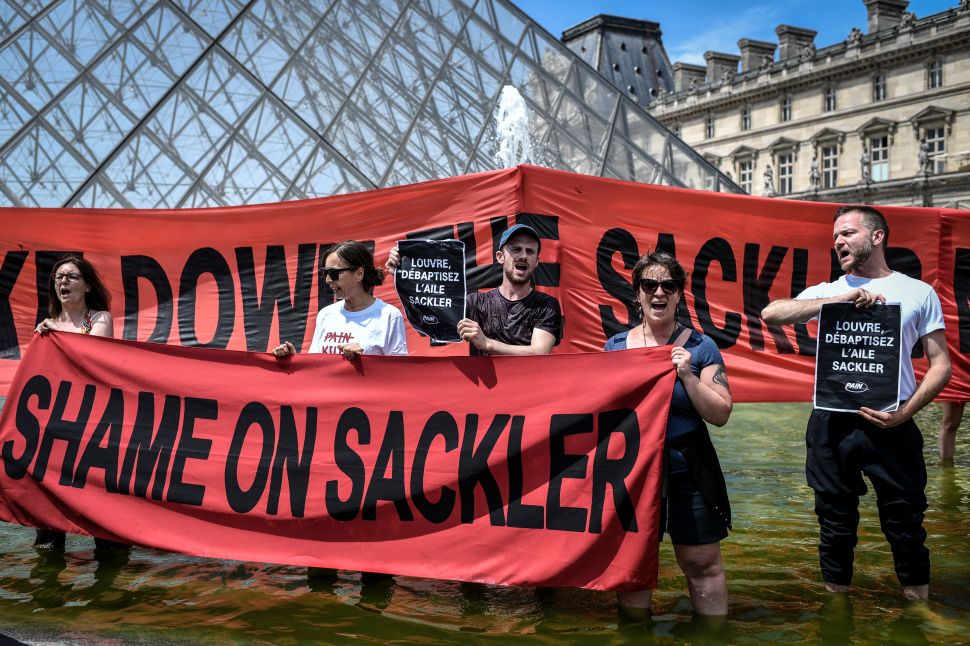