Grim, grisly and downright sickening, Midsommar is a feel-bad horror film about suicide, mercy killings, insanity, graphic nudity, religious hysteria, and the kind of grotesque imagery that exists for no other reason than shock value. Director Ari Aster’s delusional fantasy films contain enough imagination for today’s pretentious critics to label him a “visionary,” but not enough substance or ideas for the real world to regard him as an artist of true and lasting value. His breakthrough film Hereditary featured a cult that collected human heads. The cult in Midsommar collects everything else and burns everyone alive. Proceed at your own risk.

What passes as a plot can be related on the head of a darning needle. A mentally disturbed post-grad student named Dani (Florence Pugh) suffers a breakdown when her bi-polar sister murders both of their parents and commits suicide. Needing a change of scenery, she accompanies her handsome anthropologist boyfriend Christian (Colorado-born Irish actor Jack Reynor) and his friends from America to a pagan commune in a sunny but remote corner of Sweden for a terminally bizarre festival that occurs once every 90 years called “Midsommar.” Rendered loopy on the first day after drinking “magic mushroom tea,” the gang of naïve Americans heads for a downward spiral that leads to disaster and eventual death.

This film seems endless, with all of the horror restricted to beginning and end sequences with interminable wide-angle lenses capturing the moment-by-moment eccentricities of the cult in a pointless series of mood changers that explain all but the most basic necessities. Who are the parents of the endless children raised by all cult members together? What is their purpose? Where do they go in the winter? The food is strange. The midnight sun never sets. The elderly indulge in rounds of eerie, slow, ritualistic yodeling that sounds like the “e-i-e-i-o” in “Old MacDonald Had a Farm.”

The first week’s kinky activities culminate in the suicides of the two oldest members of the community when they leap to their deaths from a high rock. It’s too much for the already traumatized Dani, whose relationship with Christian was crumbling before she arrived in Sweden. But now, instead of packing her bags and heading for the nearest highway out of hell, the women in the cult crown her as a leader, empowering her to join them in kicking the men under the bus. As one by one the guys meet unspeakably violent deaths, Christian is stripped naked and forced to have group sex before they set him on fire.

It’s impossible to know what’s going on, but really hypnotic to watch. It’s interesting to see how much terror the delusional director can milk out of bright, sun-dappled green meadows and cobalt blue skies,  and the actors, while called upon to enact painful, physically and emotionally disturbing challenges above and beyond the call of duty, give it their all (in more ways than one).

The result is a sick, sophomoric and paralyzingly overwrought and overlong send-up of the women’s movement that will either insult, enrage, or thrill female audiences. An epic for the adventurous spirit looking for something unprecedented and not altogether bearable, Midsommar is also unique. Like it or hate it, you can go away claiming it is not like anything you’ve ever seen before, and mean it. 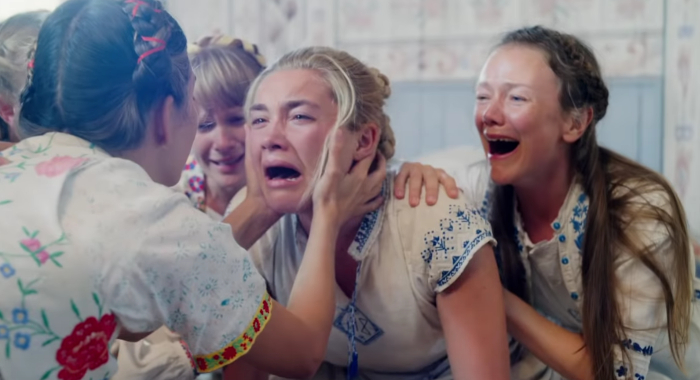