In a spacious apartment of creamy white surfaces, Monica Phromsavanh, founder of ModaBox, a fashion shopping box service, sits on a contemporary chaise lounge. With a Central Park view out the windows and her miniscule chihuahua Reina (“Queen” in Spanish) intermittently on her lap, she highlights her journey from a refugee camp in northern Argentina to launching ModaBox four years ago in New York City.

ModaBox is an online shopping and styling service for women too busy to shop or who don’t have access to the clothing they want. Customers fill out an online questionnaire about their style preferences and get matched with a suitable ModaBox stylist. After receiving a box of outfits in the mail, customers keep and pay for the pieces they like, return garments they don’t like and their deposit is refunded.

There is a growing number of fashion box services, such as the pioneering Stitch Fix; ModaBox’s specialty is its high-touch, one-on-one service. ModaBox has eight stylists who choose customers’ outfits, not algorithms; stylists are available via text, email and phone. ModaBox has more than 1,500 repeat customers, who Phromsavanh calls ModaBox members.

ModaBox’s personalized touch is an outgrowth of Phromsavanh’s previous business ModaListas (“Fashion Ready” in Spanish). A brick-and-mortar shop that sold dresses from emerging designers, she launched and ran for four years.

Opting to talk at her apartment rather than the ModaBox office in the Garment District where “boxes are piling up,” as Phromsavanh described it, she explained how being an immigrant entrepreneur, born and raised in a refugee camp, has shaped her work ethic and business decisions.

What is ModaBox, especially for those who are not familiar with fashion box services.
ModaBox is a personalized shopping service for women. We curate and deliver fully coordinated outfits to customers who can try clothes on in the comfort of their own home. They keep what they love; return what they don’t.

Customers are not charged unless they like a piece?
Customers give a deposit, let’s say on a “Premier” box, which is a $200 deposit. If they don’t like anything, the $200 is 100 percent refundable when the box is returned. If they like $150-worth of clothing, they get a $50 refund. If they like clothing totaling $300, we charge them an additional $100 afterwards.

Couldn’t a customer wear a piece of clothing once and then return it?
Every business has risks. In stores, people steal, makeup gets smeared on a shirt in the fitting room. It’s very rare with ModaBox customers, maybe it’s happened with one percent of our customers.

ModaListas was a brick-and-mortar shop, how was it transitioning to e-commerce?
The first two years of ModaBox were challenging. I’m a good salesperson because I really enjoy going through the process of helping somebody without trying to sell, just seeing if they feel good in what they are wearing. E-commerce is totally different. I mean, I was shocked! [laughs] I’d launched and run a successful business, why was this so difficult? We had a lot to learn.

What made you launch ModaBox in the first place?
I was at the ModaListas shop one day and had one of those ah-ha moments. It was raining and we had no customers. My staff was walking back and forth, fixing the racks. We also had no customers when it snowed and when it was too hot.

However, when we did have customers, every time they went into the fitting room and my staff worked with them, they usually bought. There was this one black dress and three out of five times it was tried on, it got purchased. But we didn’t have anyone to sell to. So I thought, if I can’t get people to come into the shop, can I get the product to them?

How did you arrive in New York City, you grew up in a refugee camp in Argentina, no?
Well, I was born and raised in Misiones, which is the north of Argentina, my parents were refugees from Laos. When the Secret War was happening in the ’70s and Laos was getting bombed, Argentina took some refugees.

The refugee camp was a warehousing situation; each of the 120 families had a 300-square-foot room. There was no electricity or running . I was born soon after my parents arrived. The government didn’t help place my parents with jobs or learn Spanish.

My mother left when I was six years old to find a better future for herself. She couldn’t deal with the camp; it was just too unbearable. She had very little money, just enough for a flight, she couldn’t take her two kids. It was really hard on her, she didn’t know where she was going.

I grew up in the refugee camp until the age of 15. I never saw anything outside of it except for school, that’s how we learned Spanish, adopted the Argentinian culture and connected to society. Many of the kids from the camp went to Buenos Aires to get jobs because our parents couldn’t really work, their Spanish was super broken. When I heard there was work, I dropped of school and took a bus to Buenos Aires at age 15, where my brother was already working. I went to the Floresta neighborhood and got a job as a salesperson at a retail wholesale store.

Did you live with your brother?
No, I lived with girlfriends from our community who were a little older than me, 17, 18, we lived in hostels; three, four girls would share a room. We worked all day and just came home at night to sleep. I know it sounds a little crazy, but it was safe.

My mom had moved to the United States, she had family here; she contacted me when I was 17 and said that it was a good time for me to reconnect with her. Since I grew up without my mom, we didn’t have a relationship.

I was having a great time with my friends in Buenos Aires, I didn’t want to go to the U.S., but decided to give it a shot.

My very first job in America was as a greeter at the clothing store Express in Connecticut. My job was to say, “Hi, how are you today? Welcome to Express.” That job evolved to sales person, my numbers happened to be great. I got promoted to run the store as an assistant manager, then manager.

You lived in Connecticut, Pennsylvania and North Carolina. How did you become an entrepreneur in New York City?
I came to New York with two pieces of luggage and $200. I slept on the floor of a friend’s apartment in Coney Island, Brooklyn. I got a job at the Burberry on 57th Street, that’s when things changed for the better.

However, after four years, I started to envision what the rest of my life was going to be. I wanted something new. One weekend, I sold a bunch of accessories at a street fair and made $700 dollars in a day.

One thing led to another and I started selling dresses for small designers I knew. At my first event, I made $7,000, which I split with the designers. That’s how my entire business started! [laughs]

I opened ModaListas at the Limelight Shops in Chelsea, the space was 90-square-feet! That expanded to a 4,000-square-foot space because we were doing well.

Do you think being an immigrant has impacted your business decisions?
There are benefits to being an immigrant business owner especially where I came from. When I think of how my parents fought to survive, to have a meal on the table, I realize it’s such a luxury for me to start a business. And it can’t get any worse than what I started with [laughs] so I might as well go for it!

But sometimes being an immigrant does hold me back. When I launched ModaBox and was in the process of raising funds, the immigrant card was a real chip on my shoulder. Even though my English is good…

It’s very good.
When I’m nervous, my English becomes like, lalallalala [garbled sound]. I went to pitch a room of 30 men and I was so nervous I couldn’t even speak English—my words were just not coming out properly.

Did you get any venture capital funding?
No! [laughs] I don’t blame that on being an immigrant or a woman founder. I blame it on being too shy and nervous about my pitch, not being confident. I do have a small pool of angel investors, and I funded the business as well.

I realized I didn’t want to rely on a check from an investor to keep my oxygen tank continuing to work. I wanted to build a business that’s running and profitable or reinvesting, rather than, “Oh my god, if I don’t get the next round, I’m going to have to close the door.”

Immigration is part of the national conversation during the Trump presidency, does that impact you?
When Trump got elected, I cried that night. It hasn’t affected me because I’m an American citizen, but I can relate to, and sympathize with, everything that has happened since the election. I’m always going to remember where I’m from. 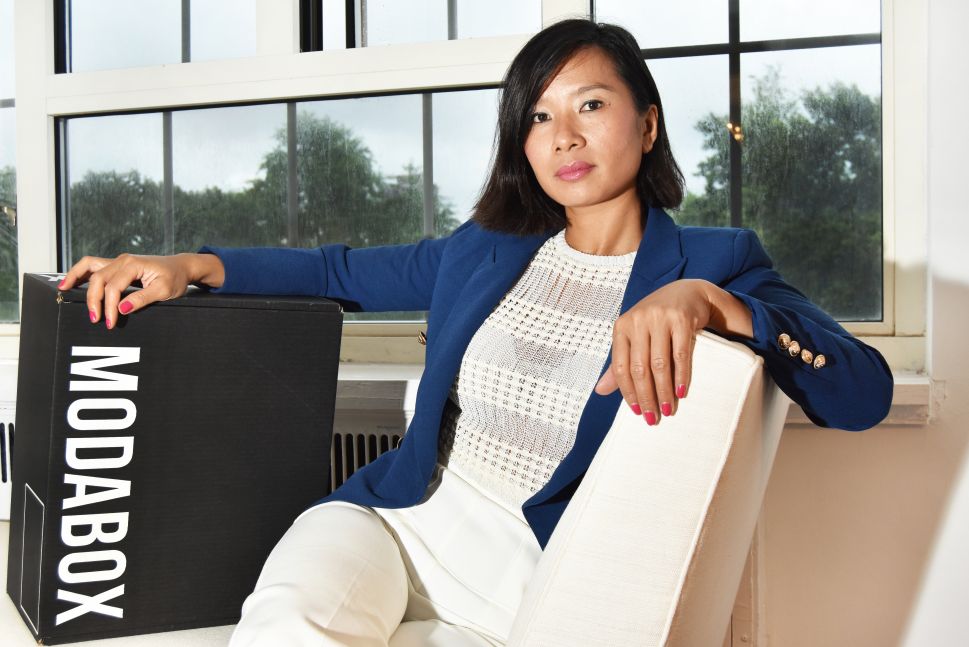