Rancid, preposterous and hysterically over the top in ideas and execution, “once upon a time” perfectly describes writer-director Quentin Tarantino’s ninth film. Once Upon a Time…in Hollywood is indeed another hopped-up fairy tale like every other Tarantino epic. In everything from the ghastly Reservoir Dogs to the screwy Pulp Fiction to the vastly superior Inglourious Basterds, the Tarantino oeuvre follows the same pattern: disorganized scripts that fall all over the screen like scattered newspaper clippings from the days when we still had newspapers, an over-long mixed bag of wonderful performances and strung-together scenes badly in need of tighter editing, leading up to one great scene at the end both wild and scatterbrained enough for delusional critics to label him “visionary.” Hollywood is no exception. Imaginative and awful, it is typical Tarantino. Who else would envision the historic Manson gang massacre that gripped Tinseltown in a vise of terror as a comedy?

SEE ALSO: ‘The Art of Self-Defense’ Fails to Offer a Cogent Point of View on Toxic Masculinity

Despite reviews that foam at the mouth about how laugh-out-loud funny it is, I paid real money to see Once Upon a Time…in Hollywood in a real movie theater with a real audience, and I am here to tell you not one person uttered a single chuckle during the film or applauded during the end credits. I don’t know if this is a dismissal or an endorsement. I can only tell you it makes any carefully considered critical assessment impossible. Frankly, I find the entire experience baffling, and any attempt to laugh off the Manson murders as sitcom fodder embarrassing.

OK, it’s not really about the slaughter of pregnant Sharon Tate and her ill-fated houseguests anyway. It’s about a has-been cowboy star named Rick Dalton (Leonardo DiCaprio) who once starred on an NBC TV series called Bounty Law, and his faithful companion, stunt double and roommate, Cliff Booth (a delightful, droll Brad Pitt), who happen by chance to live in the house next door to Tate and Roman Polanski.

On the fateful night the Manson lunatics turned up, seeking revenge on former tenants Candice Bergen and her boyfriend, Doris Day’s son Terry Melcher, Tarantino envisions them invading the wrong house and meeting their third-act finale at the hands of the indestructible DiCaprio-Pitt duo. Moral: If you’re looking for trouble in Hollywood, don’t pick on a stunt double.

Tate is around, played by gorgeous Margot Robbie, but never fear. In Tarantino’s scenario, she comes out camera-ready and invites the cowboy star over for cocktails after he blowtorches the Manson monsters to ashes with a flame thrower he just happens to keep handy. Doesn’t everybody? But I’m ahead of myself. Before we get the Technicolor soap opera version headed for primetime, we must suffer through two and a half hours of dropping a multitude of forgotten Hollywood names from Virna Lisi to Audie Murphy, accompanied by a floating toxic cloud of numbing, bubble gum rock.

The movie drags on like a turtle on valium, cramming in the period clichés like concession-stand popcorn. Pitt strips down to climb a roof, stage a mock fight with Bruce Lee and prove how much time he spends at the gym. DiCaprio heads for the spaghetti-western scene in Almeria, Al Pacino shows up as an insulting Jewish cliché in the form of a studio mogul named Marvin Schwarzs, Dakota Fanning is the notorious Squeaky Fromme, and hundreds of actors crowd the scene in old Hollywood landmarks like El Coyote, Musso and Frank’s and the deserted Spahn Ranch where the Manson gang used to hang out. A battered Bruce Dern plays their host—drunken, half-blind George Spahn.

Walk-ons include Brenda Vaccaro, Clu Gulager and Kurt Russell, surrounded by a cast of hundreds from Central Casting who play sailors, cops, pirates, hippies, Playboy bunnies and Mama Cass. They all seem to be guests at some insider wrap party to which the audience is not invited. I guess this is as it should be, since it is never clear to the viewer what anyone is saying or doing, or what movie they’re in anyway. The point, if there is one, honors the tradition that in movies about making movies, fiction is always more entertaining than the truth.

I don’t mind a little artistic license, but making up history to build a nearly three-hour movie around one phony finale that reveals nothing fresh about Hollywood is a new definition of wasteful self-indulgence, if you ask me. A coda announces no animals were harmed in the action scenes. The actors, however look like they might have been slaughtered instead. 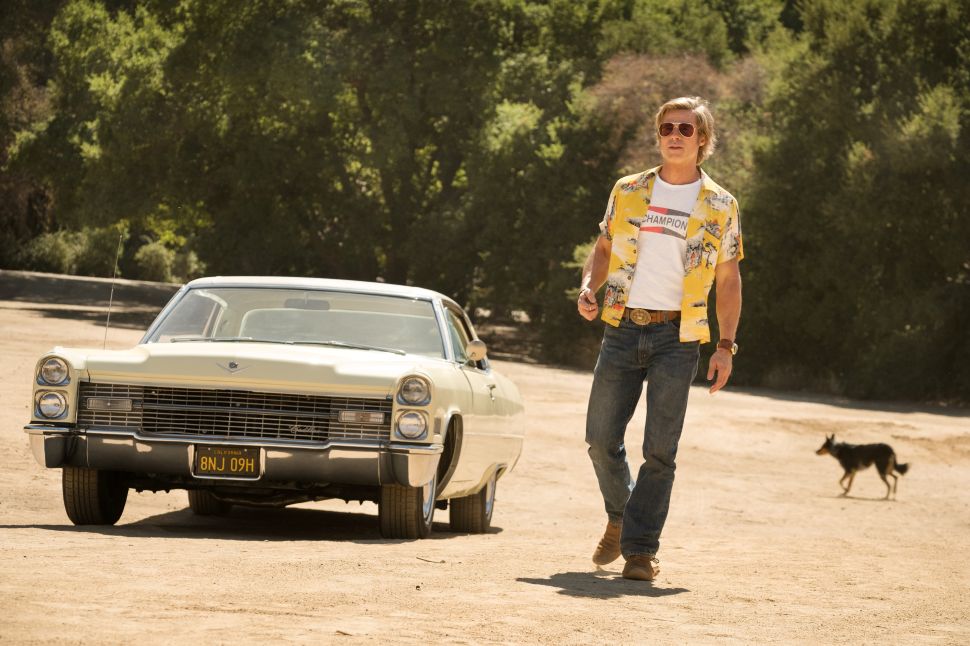