How do you end a show like Orange Is The New Black? It’s hard enough to try and stick the landing for any long-running (and mostly-great!) drama, but here, there’s also the added legacy surrounding it: one of Netflix’s first originals, an ensemble cast featuring primarily women of color, characters of different races and sexualities, and a series that put women first while combining smart comedy with cutting commentary on the prison system. That’s not even getting into just how many characters and storylines that the show is tasked with wrapping up. It’s understandable to be wary of the seventh and final season, especially as the show has struggled quite a bit the last two or three years, but fortunately Season 7 bows out with a solid—albeit imperfect—ending.

It became clear that Orange Is The New Black was beginning to wrap things up last season, as many of the storylines hinted at the end—especially since Piper (Taylor Schilling) was released from prison in the finale. The long march to the end was further complicated by the fact that the show introduced a new story arc in that same finale: the addition of ICE detention centers at Litchfield. It’s both a smart and concerning idea; of course this series, which features numerous immigrant characters and takes place in our current world, would want to touch on ICE, but there was also no way that the show would be able to dedicate enough time to such a complex, important issue in one final season.

SEE ALSO: Does ‘The Real World’ Work in 2019? Facebook Makes a Case for Its Relevance.

The results, then, are iffy, but overall the 13 final episodes offer an enjoyable, funny, and often cathartic journey. As expected, the best aspects belong to the best characters: Tasha (Danielle Brooks, always providing a powerhouse performance) faces down a life sentence while trying to figure where to go from here; Nicky (Natasha Lyonne) romances a new inmate; Cindy (Adrienne C. Moore, a real standout this season) adjusts to changes we won’t spoil, and more.

Predictably, a significant portion is dedicated to Piper, now on the outside, as she’s thrust back into her old world but has to figure out what to do with her new life. After getting “prison married” last season, Piper and Alex (Laura Prepon), who still has three years on her sentence, are faced with continuing their relationship and remaining faithful while surrounded by loneliness, frustration and temptation. While I appreciate the scenes depicting Piper’s recently-released struggles—trying to find a job that complies with her probation restrictions, mandatory drug tests that she has to pay for herself, the inability to make enough money or live on her own, etc.—it still falls into the same trap as much of Piper’s plots throughout the whole series. The intentions are good, but it’s often hard to care about this character who is, generally, far more boring than everyone who surrounds her. This is especially true when contrasted with another inmate who is released this season and their bigger, more dire circumstances that come with their distinct lack of privilege—a privilege that Piper has. (It’s also hard to fully engage with the Alex-Piper relationship drama—is there anyone out there still super invested?)

There are plenty of great and notable aspects within the season that I’d love to discuss, but, according to Netflix’s discouragingly long “Do Not Reveal” spoiler list, I’m not allowed to mention any of them. There are interesting shifts in relationship dynamics, ripple effects from deaths, administration changes that range from hopeful to worrying. I’m also not allowed to talk about the specifics of how the series is handling the ICE storyline, except to vaguely say that the show is tackling immigration issues, which is especially frustrating because it’s the biggest arc of the season and the one that should require the most attention.

But I can say that it does become clear that if Orange wanted to fully dive into the very real horrors and complexities that are currently happening in our real world, the writers definitely needed longer than 13 episodes (and especially 13 episodes that already have a million characters within a billion plots). The series hasn’t completely bungled the storyline but it feels a bit unfocused and it doesn’t have enough room to breathe. It does go straight for the jugular in its attempts to evoke a strong emotional response from viewers—which is understandable and frequently effective—and it overtly hammers home just how fucked up our current administration is through painful, hopeless visuals. (And some fantastic performances, though I can’t mention who gives them!)

As usual, Orange Is The New Black falters when it spends too much time on the guards—attempts to make McCullough (Emily Tarver) more interesting don’t quite work, and her flashback seems unnecessary when there’s so little time left. (With the exception of one, all of the flashbacks don’t gel this season and it’s a bit perplexing that it’s still happening). The continued (and annoying) rehabilitation of Caputo (Nick Sandow) falls flat, particularly when they introduce a #MeToo storyline to reckon with earlier events in the series but focus far more on his misfortune than the victim’s reactions and feelings.  (It’s similar, then, to how Caputo overtook Tasha’s arc last season.) However, Ward (Susan Heyward) does get a good plot, at least, and it’s nice to see her getting more screen time.

Overall, the final season of Orange mostly works—even if it is surprisingly dull at points—and does give a compelling, emotional farewell to these characters that we’ve grown to love. It cements the series’ legacy as something truly special—something that felt almost magical at the beginning—and absolutely proves why these stories need to be told. 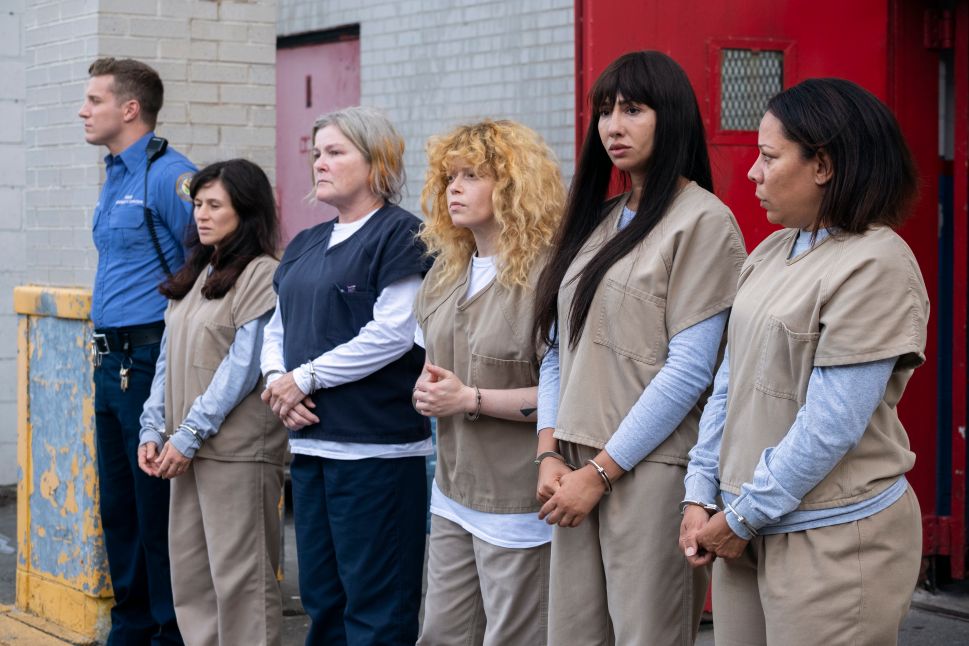