It turns out even Rihanna has real estate woes. The multi-hyphenate Grammy-winning entertainer has successfully branched out into film, fashion and beauty, but she hasn’t had the same good fortune with her houses.

The musician is now trying to find a renter for her Hollywood Hills house, which she bought just two years ago for $6.8 million. Alas, she had issues with the property after less than a year, as an alleged stalker reportedly broke into the home last spring, managing to disable to alarm system after climbing over a fence. He apparently stayed there for at least 12 hours and even unpacked his bags. Rihanna wasn’t home at the time of the incident, but even so, we can see why she’d want nothing to do with the 7,130-square-foot property after that.

She then tossed the six-bedroom, 7.5-bathroom home onto the market for $7.5 million in December of last year, though the Fenty Beauty creator hasn’t had much luck finding a buyer. Now, she’s testing out the rental waters, as the home has been listed for $35,000 a month, as first spotted by Variety.

The gated residence is located above the Sunset Strip, with arched doorways and steel-framed accents throughout, per the listing shared by The Agency brokers David Parnes and James Harris.

The oversized kitchen is fitted with stainless steel appliances and a massive marble island, and is open to a family room. The living room contains a fireplace, with a big piano in the corner—just saying, we think getting to play Rihanna’s piano should really be an enticing factor for any prospective renters.

There’s a billiards room, formal dining room and a guest suite on the first level, and there’s also a movie theater and a gym.

The master suite is located on the second floor, with its own sitting room, fireplace, balcony and bathroom.

There’s an infinity pool outside, as well as a guest house that is currently configured as a full fitness situation.

Rihanna previously owned a Beverly Hills property that currently belongs to Chrissy Teigen and John Legend, and last year she sold an additional West Hollywood home for $2.85 million. She reportedly owns a $22 million home in Barbados, as well as a house in London and two condos in Los Angeles. Perhaps now that she’s spending most of her time across the pond, she simply doesn’t need such a large residence on the West Coast. 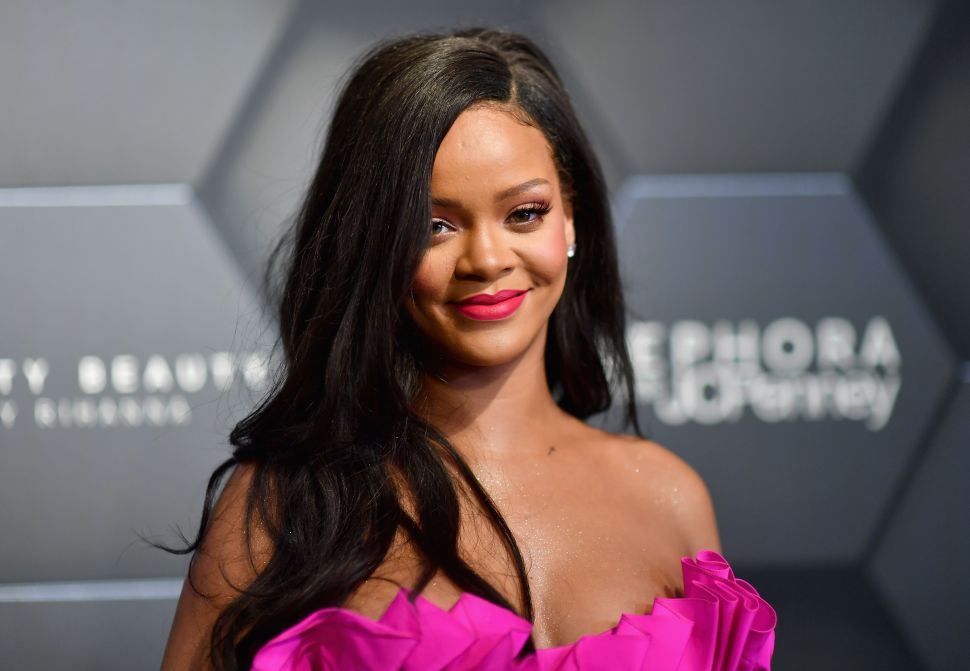