Few industries are undergoing as much rapid changes as the grocery industry. Amazon’s acquisition of Whole Foods; Aldi’s multi-billion-dollar expansion to open 2,500 stores by the end of 2023, making Aldi the third-largest grocery retailer in the U.S.; and Walmart’s expansion into e-commerce and online grocery delivery are all ushering in massive changes.

However, less well-known changes are also taking place. For example, Fleat Network has launched a company that provides a turnkey technology solution that allows fresh food, grocery and convenience retailers to launch a network of intelligent mobile storefronts, according to a Fleat Network press release. Zume utilizes vans with “baking on the way” technology to deliver cooked food directly to consumers. And a company called Robomart has ambitions to become the “Uber of groceries.”

Every advancement in the grocery industry has focused on one overriding goal — finding a way to get products to consumers as cheaply and efficiently as possible. Consumers in the U.S., for example, have been conditioned to go to the supermarket and stock up on goods for weeks or longer. To make selling groceries to consumers easier, there are 38,511 grocery stores in the United States, and 90% of the population in the U.S. lives within 10 miles of a Walmart.

The founder and CEO of Robomart, Ali Ahmed, views the rise of supermarkets with a sense of awe and trepidation. In many ways, supermarkets are certainly awe-inspiring due to their size and the selection of products offered to consumers. However, although grocery stores are beneficial in terms of location, price and selection, having so many stores has created several negative consequences, according to Ahmed.

“Firstly, the rise of grocery stores had a direct negative impact on Americans’ health, as we ended up eating less fresh food every day and instead ate more processed foods with preservatives to increase shelf life,” he explained. “Secondly, this resulted in an increase in road traffic and congestion, with trips in gasoline-powered cars generating carbon emissions. Worst of all, this has led to lower access to food as people need to travel greater distances and spend more time shopping.”

According to research, 33 million Americans make a trip to the grocery store every day, driving an average of four miles to their preferred store. They spend an hour on average per trip, and almost 70% of the time they purchase fewer than 10 items, which equates to a combined total of 21 million hours — the equivalent of 2.5 millennia spent on grocery runs.

In research that I have conducted for clients and consulting firms, online grocery ordering and delivery promised to be faster and more convenient by having someone else pick and deliver our goods. However, less than 4% of groceries are sold online in the U.S. because the vast majority of consumers don’t trust someone else picking their fresh groceries, especially when it comes to perishables like fruits and vegetables. In addition, it not only takes a courier the same amount of time — almost an hour — to make a delivery on-demand, but the extremely high cost also doesn’t justify the small added convenience in the minds of most consumers.

The Birth of Robomart

To help solve many of the issues currently facing the grocery industry, Ahmed and his team set out to reimagine the grocery experience. A key question that Ahmed asked was this: What if you could simply summon a mobile grocery store at the tap of a button, and pick fresh goods right at your doorstep, without having to drive to the store and wait in line or create a basket online and pay a high delivery fee?

The answer to the question was found by examining similar business models, and Uber quickly jumped to the forefront of models that offered a similar experience. However, instead of hailing a car, Robomart has a desire for consumers to hail a store. Thus, was born the concept of “store-hailing” which allows consumers to request a mini-mart at the tap of a button. (Frankly, I believe Uber should give serious consideration to acquiring Robomart, since the concept and technology would fit so well into the Uber ecosystem.)

Robomart has built a self-driving store that consumers can hail just by tapping a button. When it arrives, they get to shop, check-out free, right at their doorstep. For decades, consumers had the convenience of their local greengrocer and milkman coming door-to-door, and by leveraging driverless technology, Robomart recreates that level of convenience and accessibility through its all-electric, temperature-controlled stores-on-wheels.

Recently, there has been significant investment in autonomous technology and especially in delivery robots. However, every player in autonomy today is creating an incremental improvement that only saves labor costs by taking the driver out of the vehicle. They are not creating a new business model — Waymo is simply Uber without the driver, while Nuro is Postmates without the driver. On the other hand, store-hailing is an entirely new business model that creates additional revenue for retailers, not just cost savings. (Fleat Network and Robomart are the two leaders in the space as it relates to store-hailing, but each company has a different business model.)

By combining the ease and convenience of checkout-free shopping with autonomous vehicles, Robomart has built a unique differentiator with significant advantages:

As with all new concepts, however, the challenge will be to convince consumers to change their shopping behavior. I believe Robomart and Fleat Network have the best opportunity to introduce new services that consumers will embrace, even though each company is coming at the same problems from different perspectives.

It’s an exciting time for retail as new technology emerges that completely rethinks all our long-held assumptions and pioneers an entirely new category of grocery shopping. The challenge, however, is this: We aren’t there yet in terms of having autonomous vehicles in wide-scale use. I give the edge to companies that have created business models that allow vans driven by humans to introduce their services with the ability to transition to autonomous vehicles when the opportunity presents itself.

Robomart utilizes teleoperations (a remote driver, utilizing multiple camera views, controls the Robomart vehicle). This means that although Robomarts’ vehicles are driverless, there is a human in control of it when it’s on the road. This allows Robomart to accelerate regulatory approvals more easily from city governments to allow the use of the vehicles and allows Robomart to scale more rapidly.

Based on my experience working with some of the largest grocery retailers globally, I believe Robomart’s concept and business model can succeed. Utilizing autonomous vehicles greatly reduces costs and increases the ability of retailers to customize the product selection they wish to offer to customers without raising prices. Some vehicles can provide consumers options for picking and purchasing fresh fruits and vegetables, whereas other vehicles can offer cooked food, dairy products, over-the-counter medicines, baby formula, diapers and so on.

Consumers are demanding increased convenience; Robomart, a mobile store that can be hailed at a moment’s notice, is about as convenient as it gets. 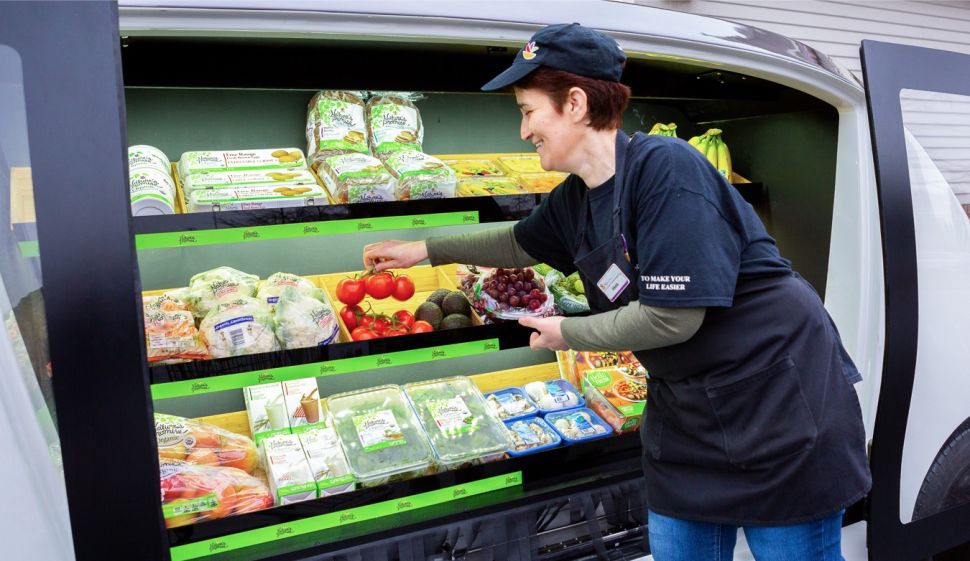