Invoking the Cold War in an article about what Vladimir Putin’s Russia is doing to the United States is a lazy and ignorant mistake, but in this instance—the meaning of a recent report by a 23-member Pentagon panel, publicly released but not widely remarked upon, that the United States and Russia are already the belligerents in a conflict, albeit one in a “gray zone” between peaceful cooperation and a shooting war that could absolutely veer that way unless the U.S. can proactively counter—it is hard to find a readier parallel.

The Cold War was a war—but not like Iraq or Vietnam and most certainly not like World War II, with open and relatively unrestricted combat across the world—but it was a state of enmity between two rivals for great power in a constant struggle to thwart their adversary but without swinging to hurt or taking a chunk of flesh, never quite landing the lethal blow everybody knew was possible. Like getting in a shoving match with someone everyone knows you hate, while also open carrying.

SEE ALSO: The Full Story of Trump’s Russia Ties Will Come Out

Reading the analysis of what Putin’s Russia is up to now in “Russian Strategic Intentions“—namely, undermining the West’s liberal institutions with espionage, economic competition and cyber intrusions including election meddling and disinformation campaigns, as well as actual fighting with U.S. combat forces, albeit with proxies including paramilitaries with mysterious funding—one hears the description of a limited conflict awfully similar to the Cold War.

More to the point, in the view of Vladimir Putin and the rest of the deeply insecure Russian leadership, Russia already “sees itself as at war with the U.S. and the West as a whole,” according to a line in the report’s introduction attributed to Christopher Marsh, a Russian expert at a small think tank filled with several military vets, called the Special Operations Research Association (SORA).

Maybe, because what the hell is war, anyway? According this analysis of Clausewitz (whom I have not really read but really did try once or twice, and even owned a copy of On War), “war” is almost a term of art, not a dichotomous state of being entered after crossing some imaginary and arbitrary line. There is no state of war and non-war for competing powers, but put less dialectically, you were already at war when the shooting started—that was just the last step or tumble in the wrong direction, where you were headed already.

That’s the definition of “war” according to the Pentagon’s understanding—no request from Congress, invocation of extraordinary powers or tweetstorm necessary—as well as for the Russians. From a Kremlin perspective, “this war is not total, but rather, it is fundamental—a type of ‘war’ that is at odds with the general U.S. understanding of warfare,” according to one of the report’s authors, Daniel Goure, who briefly worked in the State Department in the early, pre-Iraq War Bush administration and whose paycheck comes from the Lexington Institute, a smallish Washington think tank once described by Harper’s as the “defense industry’s pay-to-play ad agency.”

Some of the report’s more strident findings—specifically, the ones that insist Russia is at war with the United States, right now—seem to be from obscure think tanks. Who cares what an analyst funded by whomever (Goure’s outfit doesn’t say) thinks?

Hopefully, President Donald Trump, Congress and the American public, because it’s what their top military advisors think, according to Navy Rear Admiral Jeffrey Czerewko, a former fighter pilot and top Pentagon military advisor who signed the preface of the report; other authors include academics at the U.S. Military Academy and George Washington University, as well as think tank eggheads with questionable motives. The report was prepared as part of a wider Department of Defense “Strategic Multilayer Assessment” requested by Pentagon brass.

In other words, this is mainstream thinking—and so is the Clausewitzian and Russian understandings of war—but only among military thinkers. Elected officials and the media do not share such an understanding, and would consider U.S.-Russia relations a “war” only if Marines were in Crimea. You can hear such echoes in descriptions of U.S. relations with Iran, which would be a “nasty and brutal” conflict, if it were a war—but cyberattacks and espionage battles aren’t that. Or are they?

They are. In general, current and “future confrontations between major powers may most often occur below the level of armed conflict,” Czerewko wrote. “Russian provocative activities… involve the orchestrated employment of military and nonmilitary means to deter and compel the U.S., its allies, to and after the outbreak of hostilities.”

“These strategies must be proactively confronted, or the threat of significant armed conflict may increase,” he added.

Which is the general thrust of the entire analysis: that the United States needs to match and thwart Russian aggression. One problem is that the United States already does do much of what the Russians are doing—at least certainly in terms of funding and arming proxies, applying soft power moves, like economic sanctions and competition, and constant spying. Another is that the American brand is currently hurting—Russians are able to capitalize on divisions at home, to point out that the U.S. is a mess, and so why should anyone work with us?

Another problem really does appear to be the commander in chief of the military, whose July 4 Nuremberg rally with tank bunting was the subject of internet trolling, as well as a whole mocking segment on Russian state-owned television.

Other than working to kibosh a fossil fuel pipeline that is a literal lifeline for Russia’s economy, Trump sure doesn’t seem to view Russia as a threat, at least not one on par with Iran. Neither Iran nor North Korea have antagonized the U.S. nearly as much as Russia—and Trump has threatened the first two with destruction, paid a state visit to the second, and continues a very weird and very open campaign of public admiration of Putin.

So are we at war? One answer is it depends on what you mean by war. Another is yes. What you choose to believe, as usual, is apparently up to you.

If you read the recent "Strategic Multilayer Assessment (SMA) White Paper" on "Russian Strategic Intentions," and think the present/future is new, you may want to read this (from 1961) and ask if we're arming for the war we're in or something else: pic.twitter.com/al7zUFIN62 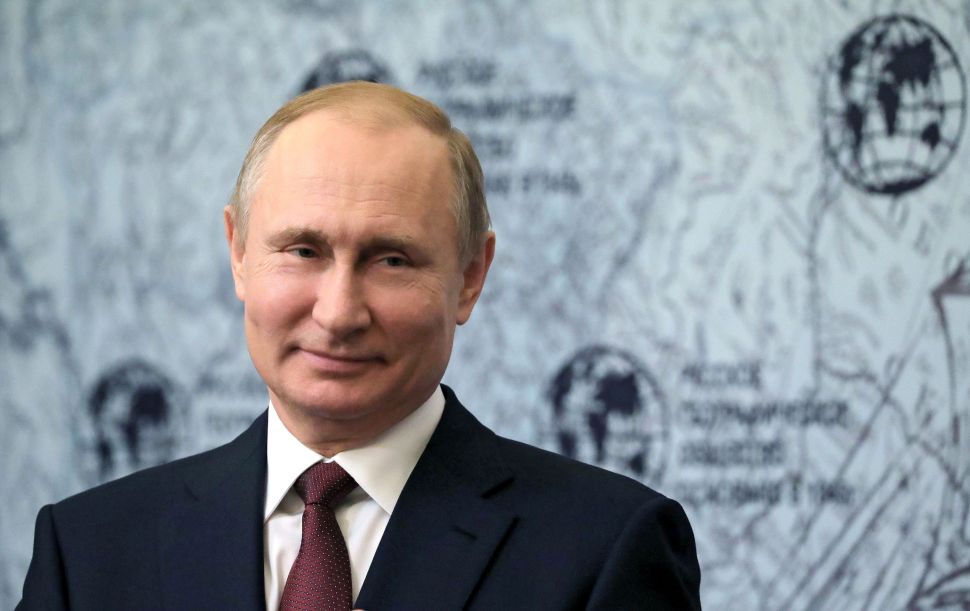