“You’ll never go into the again.”

“Don’t get left behind.”

“Pleased to eat you.”

It doesn’t really matter what your tagline is. If you’re making a shark movie, odds are you have a hit on your hands.

The North American box office is down around nine percent compared to last year. Theatrical ticket sales have steadily declined since 2002. At-home entertain options continually sink their teeth into the collective pop culture consciousness. Yet amid the carnage and chaos of modern moviemaking, shark films remain a consistently reliable box office attraction.

SEE ALSO: What You Need to Know About the ‘Jaws’ Sequels Before You Binge Them All on Netflix

Godzilla may be king of the monsters, but a gnarly great white is clearly king of our wallets.

Last summer, The Meg darted past all reasonable expectations to chew up $530 million worldwide. The summer before that, 47 Meters Down earned more than $40 million against a minuscule $5.5 million budget. And in the summer of 2016 (note that peak beach season is prime shark-movie real estate), The Shallows swallowed up north of $115 million against a $17 million budget. We live in a world in which Sharknado is a thing—is that not proof enough?

Jaws invented the summer blockbuster back in 1975, becoming the highest-grossing film in history for a time. That titanic cinematic monstrosity slapped down the exclamation point on the sub-genre. But why do shark films resonate with audiences so powerfully and why do they do such big business in an otherwise volatile and unpredictable Hollywood marketplace? To answer that, we spoke to box office experts, authors and professors whose work revolves around all things big fish. Here’s what we learned.

The Economics of Shark Movies

Jaws was not the first shark movie to instill fear in the hearts and minds of audiences. Earlier notable shark films include White Death (1936), The Sharkfighters (1956) and Shark! (1969). One could even argue that Creature from the Black Lagoon (1954) first popularized the cinematic notion of killer creatures lurking beneath the . But Jaws took the concept and turned it all the way up to 11, redefining studio filmmaking and the entire Hollywood model.

“Spielberg brought that notion to a mass audience through the medium of film,” Paul Dergarabedian, senior media analyst for Comscore, told Observer. “For the first time, wide mainstream audiences weren’t relying on their imagination. The visual representation brought to life a war with sharks and created an action, adventure, horror, thriller attraction.”

Ever since Jaws, you’d be hard pressed to find a theatrical shark film with decent looking creature design and a somewhat original plot that didn’t work at the box office.

“Shark movies are irresistible, indestructible and review-proof. That’s not to say you can’t have a bomb, but it is one of the most resilient genres in all of film,” Dergarabedian noted.

2013’s Sharknado, 2011’s Sharknight 3D, 2004’s Open , 1999’s Deep Blue Sea—each of these films were profitable, as were the three features mentioned earlier. So if shark movies are such consistent moneymakers, why aren’t studios banging them out every quarter?

“An effective shark film, I would argue, is not easy to do, despite the fact that the genre looks deceptively simple,” Barna Donovan, professor of communications and media studies at Saint Peter’s University, told Observer in an email. “With a limited option of settings and limited sets of plots and characters to work with (vacationers, scientists, sailors, fishermen, soldiers, adventurers or law-enforcement) stranded on a disabled boat, sinking ship, small patch of rock, sunken ship, submarine or in a flooding underwater facility, bringing fresh ideas and means of execution to the shark film is a challenge.”

Each of the Jaws sequels were critical duds, which led to commercial flops. But film executives aren’t dumb (well, not always), they know how to read culture and predict trends, even if they’re prone to running a winning concept into the ground. They are wise not to flood the market with several shark-based movies at once (as they did in Hollywood’s vampire binge of the mid 2000s) so as to avoid the genre becoming cliché. But that doesn’t mean there isn’t room for more stories in this vein.

“Even though there hasn’t been a Jaws film in 32 years, whenever there’s a new shark movie in theaters it’s inevitably compared to Universal’s classic,” Jeff Bock, senior box office analyst at Exhibitor Relations, told Observer. “So why doesn’t Universal make another one? Good question. I’m sure Blumhouse could put together a reboot for under $25 million. This seems like a no-brainer. Time to put that chum back in the .”

Bock makes a good point—this sub-genre isn’t exactly forcing studios to crack open their piggy banks. Looking at the theatrically released shark movies of the 2000s, The Meg is the only live-action film with a budget greater than $30 million. For the most part, these are inexpensive features that provide fantastic bang for your buck. The economics just make sense, as does the primal pull these movies have on us.

The Psychology of Shark Movies

To understand what it is about shark movies that we find so attractive, we must first understand the foundations that movies meant to thrill and scare are built upon.

“Changes in culture are frequently reflected in horror movies,” author and entertainment writer Christopher McKittrick told Observer. He argued you could see this everywhere “from 1950s horror movies rooted in science-gone-wrong fears of the Atomic Age, to low-budget horror films about cults appearing after the Manson Family made headlines in 1969, to slasher films reflecting fears of serial killers in the 1980s, to race relations being explored in the Oscar-winning Get Out.”

There are differing opinions as to what cultural fears are represented by shark movies. Some believe they are a microcosm for the collective trepidation we feel about the global calamities we see represented in the news, politics and on social media. Some believe Jaws is a product of its sociopolitical climate with scientists and policy makers of the 1960s and ’70s decrying man’s unchecked effect on global ecosystems. “A great white shark that glides under the waves, unseen until the last moment before it strikes, becomes the perfect metaphor for humankind’s absolute lack of control over nature,” Donovan said.

Others believe it’s far more simple. Sharks are real monsters; they are creatures that actually exist and they live in the one place on earth in which humanity does not rest comfortably atop the food chain. The monster-in-a-house genre speaks to a primal fear that everyone understands: don’t get eaten.

“Shark horror movies work on a very basic level: sharks are scary-looking predators, and humans are out of their element when confronted by them,” McKittrick said. “Most people can relate to the fear of sharks. Because of that, shark movies are relatively easy to market because the concept can be distilled to the very basic ‘person vs. big shark’ plot. That fear works in any language.”

In entertainment, archetypes generally fall into one of two categories: non-humanoid and humanoid. The latter are represented by superheroes, certain aliens, vampires—anything with a distinctly bipedal terrestrial locomotion and human exoskeleton. They resemble us and, thus, are not quite as scary. Non-humanoid, as I’m sure you can guess, would be creatures such as sharks, dragons and 70 percent of David Cronenberg’s imagination. These inhuman dangers are often meant to represent an idea rather than a mundane threat. They are the fear of the unknown, the danger of expanding into non-human realms, the potential for catastrophe waiting right around the corner (or just under the surface).

The sequel 47 Meters Down: Uncaged is set to hit theaters in August, further cementing the shark-movie comeback we currently find ourselves in. Though the genre’s formula might be restrictive and difficult to variate, those that can tread near the cliché yet throw in a twist (dinosaur shark!) have managed to extend its lifespan and reap the benefits. This relatively inexpensive lane has proven to be a great commercial bet for studios. Whether these films are ultimately a treatise on man’s hubris, environmental catastrophe or just plain elemental scares, the fact is that they work.

Ironically, Jaws 2 might have best surmised the shark movie’s enduring power when it teased, “Just when you thought it was safe to go back in the … “ 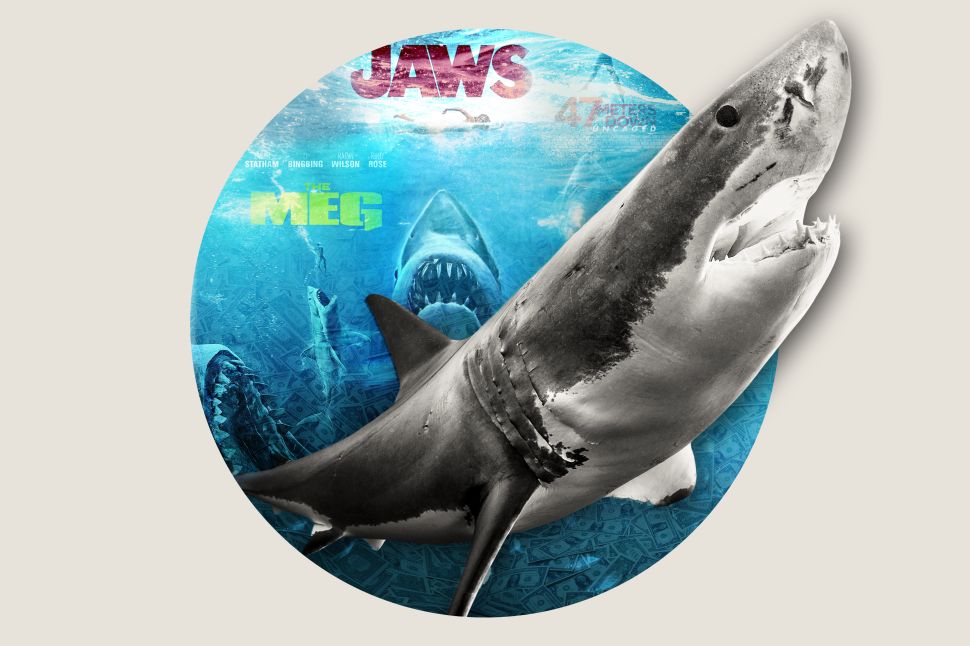