The lives of white supremacist skinheads is a subject that has often been documented on film, but Skin, a combination of revelation and horror that premiered a year ago at the Toronto International Film Festival and is now finally opening commercially in the U.S., shows what happens when an American fascist covered with tattooed symbols of racism, violence and hate decides to go straight. First, he’s got to burn off most of his body with a human soldering iron. The result is nearly two hours of torture that are not easy to take.

Written and directed by Israeli filmmaker Guy Nattiv, this is the true story of Bryon “Babs” Widner, once a dedicated white supremacist (played with unflinching honesty and valor by the terrific Jamie Bell) who saw the errors of his path through life and spent two years undergoing grim and agonizing surgeries, determined to change. After a painful childhood dodging bottles thrown by the despicable drunken racist parents (Vera Farmiga and Bill Camp), Babs grew up on the streets, drifted into the clutches of a covert gang of thugs called the Vinlanders Social Club, and began drilling permanent ink sketches of hate into his his head, face, thighs and privates from the age of 14.

Booed in the streets, spit upon and beaten to a bloody pulp by enraged protest groups, he finally began to realize what a disaster he had made of his life after falling for a single mother with three children (Danielle Macdonald) who compelled him to repent. But the long and difficult process of removing the images of ugliness and evil that covered his body is unbearable to all observers—including the audience.

The movie consists of scene after scene of burning flesh made durable only through the star’s intensity. It’s hard to believe this racist lunatic is played by the same Jamie Bell who played the charming dancer in the title role of Billy Elliot, but anyone who saw him as the young lover of film star Gloria Grahame (played by Annette Bening) in the underrated Film Stars Don’t Die in Liverpool can already attest to his growing stature as an actor of range and maturity. Nothing to date, however, has presented a challenge this enormous.

Skin shows how racist groups recruit new members, turn them into social pariahs, and train them to incite fear through violence and crime. It also shows the excruciating pain they are forced to endure when they seek atonement. The tedious narrative is divided into sections (“Day 145: Forehead Removal 19”) designed to shock the viewer back to reality.

Skin is also about the harrowing pitfalls anyone goes through if they try to exit the white power movement. Widner managed to beat the odds and leave the cult after years of hell. He is currently getting a degree in criminal psychology and lectures around the country about tolerance and inclusion. The film of his story is uneven, but if you have a strong stomach it is well worth seeing for the lessons it teaches about the value of survival in the pursuit of redemption. 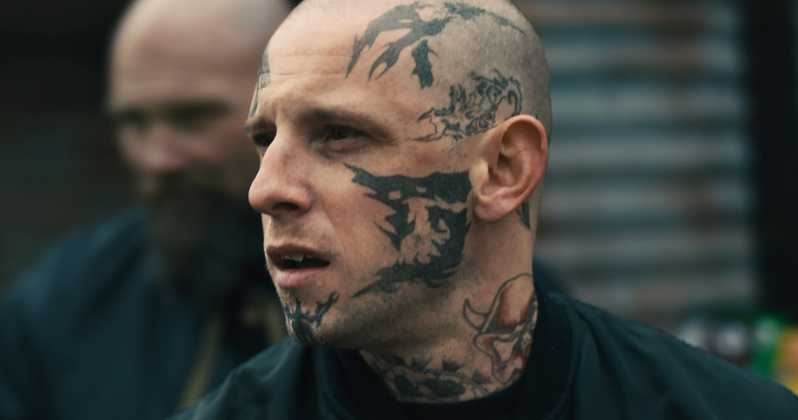