Sometime this century, the storm surges and resultant flooding that paralyzed New York City during Superstorm Sandy in 2012 could become monthly events. The century after that, flooding of garden-level apartments, subway tunnels and streets due to tidal flooding in the neighborhoods near Jamaica Bay is a guarantee. The rest of the “coastal areas throughout the city” will become swamp zones within a few decades, as the New York City Panel on Climate Change observed in its most recent report released earlier this spring.

You can dither and argue whether the root cause is climate change, but the chief factor dictating the pace and severity of sea-level rise around the coastal cities where hundreds of millions of humans live is in Antarctica, where two glaciers comprising a massive ice sheet are indisputably breaking up and melting into the ocean, at a rate that has steadily increased since 1990.

The steady collapse of the West Antarctic ice sheet means that, over the next few centuries, the world’s oceans will rise by about three meters. Thus, as Antarctica goes, so goes Manhattan—and Hong Kong, and Miami, and Saint Petersburg, and San Francisco, and so on.

If you want to salvage Battery Park for your great-grandchildren—and its analogues in Shanghai, Mumbai and Cape Town—the thing to do is to put yourself, and your children, to work saving the West Antarctic ice sheet with a preposterously ambitious snow-blowing project, as a study published last week in the journal Science Advances by a group of very serious German researchers suggested.

Warm ocean is currently melting the ice sheet from beneath, causing massive, city-sized chunks to break off and float away into the ocean. Dumping massive amounts of snow onto the sheet to replace the ice would stabilize the ice sheet and, maybe, the sea level around cities, according to the study.

Doing this, running 90 enormous pumping stations and running ocean uphill, through some of the most hostile terrain on the planet, and into a sprawling network of “snow cannons” that would, in turn, blanket the shrinking ice sheet with trillions of tons of snow—thus halting its collapse into the ocean and sparing coastal cities certain destruction thanks to several meters worth of sea level rise—would be the largest geoengineering project in human history, possibly the largest ever conceived.

It would require all of the energy produced by at least 12,000 wind turbines. It would require running seawater uphill, lifting an average of 640 meters, in pipes that would have to be made freeze-proof, and the would likely require desalination—necessitating more power. Nobody knows how much money or how many workers, put to the task over a decade, the project would require. It would also have a potentially “devastating impact” on the local environment.

It is crazy—and the scientists behind the study know it. It would be far cheaper and easier to stop putting carbon into the atmosphere—but failing that, the next best thing to do is an enormous multinational snow-blowing venture, something thousands and thousands of people would work on, while the rest of us pay for it. The alternative—doing nothing, while also not reducing carbon emissions—would require abandoning settlements like New York.

https://t.co/V4RIEXjk1T A new plan to prevent the West Antarctic Ice Sheet from melting proposes using "snow cannons" to spray artificially created snow made of water from the nearby sea. Pumping 7,400 gigatons of snow could stabilize the melt if it's applied for 10 years. #sci… pic.twitter.com/cUu32loXl9

“It shows how huge the problem is,” study author Anders Levermann, who heads the complexity science research department at the Potsdam Institute for Climate Impact Research, told Mashable. “As unbelievable as it may seem, in order to prevent an unprecedented risk, humankind might have to make an unprecedented effort.”

The thing about the snow-cannon suggestion is that it is only the second-largest geoengineering project in human history—the first is climate change itself, which may doom coastal cities even if the snow-gun wall is pulled off.

This is the thing: There is no shortage of studies saying, in various tones of voice, that carbon emissions play an enormous role in irreversibly altering the earth’s climate, and thus causing vast disruptions in the form of severe weather and rising oceans. We are already doing the snow-cannon thing, but in reverse.

We have made harnessing untold sums of money and people to spray trillions of tons of snow on one of the most isolated corners of the earth necessary and reasonable, a far cheaper and preferable alternative to rebuilding every coastal city a few miles inland.

Will it ever happen? Almost certainly not. Instead, New York will flood, as will Shanghai and Tokyo and everywhere else humans live near a coast. We can sit back and watch the cost of not pursuing such a grand and ambitious earth-saving technique in slow motion, just as we are already doing. 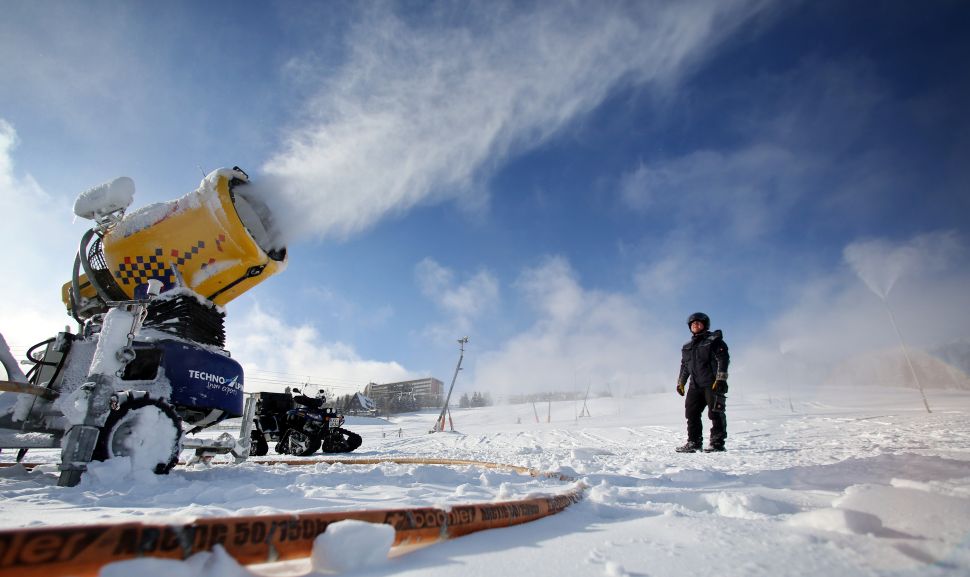