Before creating a progressive fashion label, 26-year-old Samuel Krost was known by most as Selena Gomez’s ex-boyfriend or the Fyre Festival’s booking manager. But now, people are starting to think of him as simply the mastermind behind his eponymous streetwear brand—Krost. Built around community and social change, two tenets that define the clothing brand’s founder, Krost teamed up with March for Our Lives for his first collection ‘First Semester’ to spread awareness about gun violence. Every ‘semester’ the brand plans to shed light on different social issues and different coming-of-age themes reflected in concept retail stores.

Krost’s ‘First Semester’ store resembled a university football field. Around that time, the company launched a digital series on Instagram centered on its slogan “Support Your Friends.” Real people shared their stories—against a yearbook picture backdrop—about what it meant for them to support their friends in high school. For Krost’s ‘Second Semester,’ the brand dug deeper into childhood with a playground-inspired concept store titled ‘Kids at Play.’ It’s there that Krost showcased its latest collection which introduced tailored clothing to the mix, like gender-neutral pant suits that push the boundaries of inclusivity. One of the brand’s most popular pieces is the ‘Book Me’ bag, which Krost says “is actually identical to a book that follows our brand’s mission of being youth-inspired and the importance of education.” For those in the work-force, he explained, ‘Book Me’ is a play on words to mean “book us or hire us.”

Inspired by the ’60s youth movements, where young students gathered together to spark change and rally for peace, Samuel Krost spoke to Observer about how he created his brand with those innovative pioneers in mind.

What was your inspiration behind Krost and its message to “Support Your Friends”?
Throughout my time at NYU, I witnessed firsthand what I believe to have been the beginning of a major cultural shift in society. It was the beginning of the Black Lives Matter movement, #MeToo movement, and the call for gun reform.

Unfortunately, on February 14, 2018, a gunman stormed Marjory Stoneman Douglas High School in Parkland, Florida. For obvious reasons, this tragedy had a tremendous effect on me personally. Though almost immediately and amidst all the chaos, it was the students of this community that rallied together and created an organization known as March for Our Lives.

It was around the same time that I was looking to start my career in fashion, but I was determined to become involved with the youth that were calling for real and tangible change in society, so I began to conceptualize a story that allowed me to combine my passion for fashion, while working with the youth.

I named the brand Krost as a thank you to my family for supporting me and my desire to follow my dream of creating my own label. But, “Support Your Friends” had always been a personal slogan of mine. It’s the driving message behind our brand’s story and community.

The students [and other young people] behind March for Our Lives, #MeToo, Black Lives Matter may or may not know one another personally. They may have met once, or may never meet at all, but they believe in the same ideals and that alone allows them to support one another. It connects them forever whether they meet each other or don’t. It’s about building a “positivist” community that is comprised of people who stand for the same thing and bringing each other together through this message: When we’re able to bring the masses together who believe in the same thing, that is when I believe we’ll be successful in creating tangible change in society.

Can you tell me more about your newest collection, ‘Second Semester’?
‘Second Semester’ is a continuation of our ‘First Semester’ collection. The inspiration behind these collections was taken from the 1960s—the last decade I believe young and like-minded individuals came together to forge a different tomorrow. It was a decade that was filled with different riots and protests from anti-war, anti-poverty, desegregation, women’s rights and the hippie movement. It was the youth of that decade who changed culture up until this present day.

We tried to implement different collegiate and university elements into the collection, while ‘Second Semester’ played on the theme of ‘Kids at Play,’ taking us back to the playground, baseball or basketball fields.

‘Second Semester’ was also the first collection where we introduced more tailored pieces into the collection, including unisex suiting and shirting, which was very exciting for us to show our consumers the brand’s capabilities.

Can you tell me more about your background in fashion?
Part of my degree at NYU required me to have [a certain] amount of internship hours, so I took that opportunity to work within the fashion industry, knowing it was my dream to one day start my own brand. I began as an intern at Onia, which at the time was a men’s luxury swimwear line. I built an incredible relationship with the founders who allowed me to learn the entire scope of the industry starting with sales, then production, design, operations and logistics.

This internship turned into a job after six months, and I was able to reorganize my classes and attend school from 6:45 p.m. to 9:45 p.m., allowing me to work full-time. I then moved to Spain to study abroad, and while I was away, a contact I made in the industry reached out to tell me Helmut Lang was relaunching its men’s division and they were interested in bringing me on board. So, I flew back and began working with them that summer and over the course of the next two years. It was an opportunity for me to work in a more corporate environment, an opportunity that I believe gave me a well-rounded experience in the industry. It was an incredible opportunity because although it was a more corporate environment, the men’s division had been discontinued for the previous eight years, so it was similar to starting a brand from scratch.

Where do you see Krost in the future?
I wanted to create a brand that puts its message, purpose and sense of community building first. I myself have always been a fashion lover so I inherently used apparel and accessories as my first vehicle of telling this story. Although, by no means do I see the vision and future of this brand ending with apparel.

This idea of “Support Your Friends” is also a slogan that will allow us to break into other product categories that’ll push our story further. It’s a slogan that allows us to collaborate and partner with other creatives, photographers, videographers, organizations and brands to create and build on our community.

Our third semester, or ‘Sophomore Year,’ will begin at the end of September and continue through December of 2019. We are currently working on our first collaboration, which we’ll be able to give more details about soon!

Was there a particular reason behind the gender neutral clothing?
This brand is about inclusivity. It’s about bringing all people together. So creating a line that would resonate with everyone felt inherent to our design process and the products we chose to offer.

Where do you envision your customers wearing Krost?
We’ve now successfully launched two collections, but we’re always working to perfect our basics program, titled, ‘SYF,’ which is comprised mostly of fleeces and jersey fabrics: staple pieces we hope people will where every day.

Can you tell me more about the design process?
We try to position the brand as a season-less brand, one that’s see-now and buy-now. With that being said, each collection has its own inspiration and thematic references which carries directly into our concept retail stores. We call them concept stores because each store will look entirely different from the last depending on that collection’s inspiration.

For example, our ‘First Semester’ thematic references had collegiate and university elements, which resulted into making our first concept store a football field. Our ‘Second Semester’ collection’s thematic reference was ‘Kids at Play,’ so we had a beautiful installation built around a swing set inside our store.

Taking this idea a step further, each year we intend to bring awareness to different societal issues. Our first being gun reform and our partnership with March for Our Lives, while our sophomore year will focus on the environment. 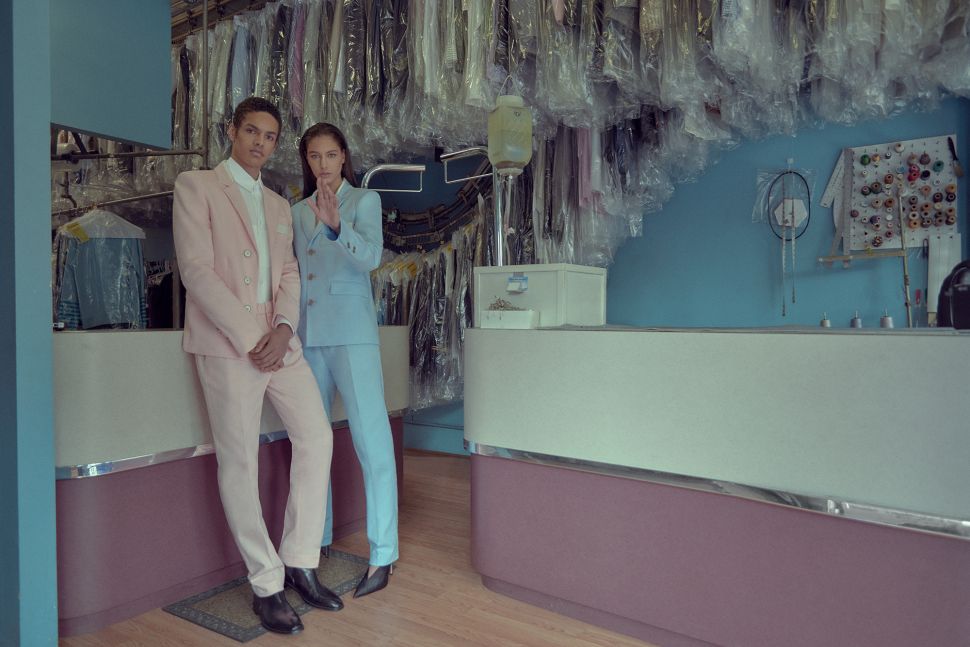