There’a an antique joke set at the old Metropolitan Opera House—the scruffy venue just below Times Square—in which a couple of horn players are honking their lungs out in the overheated, cramped orchestra pit, lumbering through the fifth hour of Richard Wagner’s immense masterwork Die Meistersinger von Nürnberg.

At a momentary pause, one yells to the other over the orchestral din, “Tell me, did Wagner write any other comic operas?”

I have to admit that’s what I was thinking just before the performance started Sunday afternoon of Rossini’s La Gazza Ladra at The Performing Arts Center of Purchase College. Word spread through the lobby that the opera, a presentation by Teatro Nuovo, would last almost four hours including a single intermission.

Wait, four hours? For a trifling comedy about a servant girl who is arrested for pilfering a silver spoon? (And she’s not even guilty: the flatware was in fact stolen by a bird, the “thieving magpie” of the title.)

But, in fact, the afternoon flew by; the hour and 45 minutes first act seemed downright short. And at the end of the marathon, the disappointingly sparse audience stood and cheered.

So how does an opera first performed over 200 years ago come off so fresh and fleet? Well, obviously part of the credit belongs to Rossini and his librettist Giovanni Gherardini. Despite its sparkling and witty music, La Gazza Ladra is not really a comic opera. Rather, it’s an example of “melodrama,” a serious, almost tragic story set among simple country folk.

And so, after Ninetta is accused of theft, just when you expect hilarity to ensure, the poor girl is propositioned by the lecherous Mayor, who offers to dismiss the charges against her (and the associated death penalty!) if she’ll have sex with him. (Next time someone repeats the canard about how opera isn’t relevant, mention this #metoo moment.) And Ninetta can’t clear herself because she is shielding her father, who is on the lam as a military deserter.

Yes, there’s a happy ending (the dirty bird returns to swipe more cutlery), but not before we see Ninetta marched off the firing squad, accompanied by a grim march that would not be out of place in Beethoven’s Fidelio.

The peculiar genre of this opera afforded Rossini rich opportunities to create large-scale pieces as the characters reflect on their various dilemmas. Especially striking are a number of duets in which the composer subtly varies formal structure to suit the precise dramatic situation. And as always with Rossini, lovely and striking melodies gush unceasingly.

As the Teatro Nuovo troupe, under the direction of Will Crutchfield, did last summer with the more familiar Tancredi, the performance met the work more than halfway. The orchestra playing in particular was revelatory: the band of original instruments was seated on the same level as the audience, creating both a more present sound and intimate rapport with the singers.

In fact, the orchestra seemed to beat with a single heart, bobbing their heads in unison with the “primo violino” Jakob Lehmann and “maestro al cembalo” Rachelle Jonck. The two shared leadership duties in lieu of a conventional conductor, setting and maintaining crisp tempos while playing the violin and keyboard respectively.

As always, Crutchfield assembled a clever and brave cadre of young singers, who performed with an exhilarating mix of musicality and valor. Particularly starry was Hannah Ludwig in the male role of Pippo, her luxurious mezzo-soprano setting into sinfully rich chest tones without a whisper of vulgarity.

We even got two singers as the wicked Mayor: Hans Tashijian, unctuous as Basil Rathbone in the first act, then Vincent Grana, jumping into the second act (and a long aria of baroque complexity) when Tashijian fell ill during intermission.

In the enormous role of Ninetta (she hardly leaves the stage after her first entrance), Alisa Jordheim wielded a crystalline soprano, meticulously accurate coloratura and a range of well over two octaves. All she lacked, I thought, was a dash of fire. At all times she came off like a well-bred conservatory student, not a desperate young women facing death and ignominy.

Yes, it was a long afternoon, but absolutely worth the trip to Purchase. Fortunately for Rossini, fans, a repeat of this sterling performance is only a subway ride away when the concert is repeated at Jazz at Lincoln Center’s Rose Hall on Thursday night. 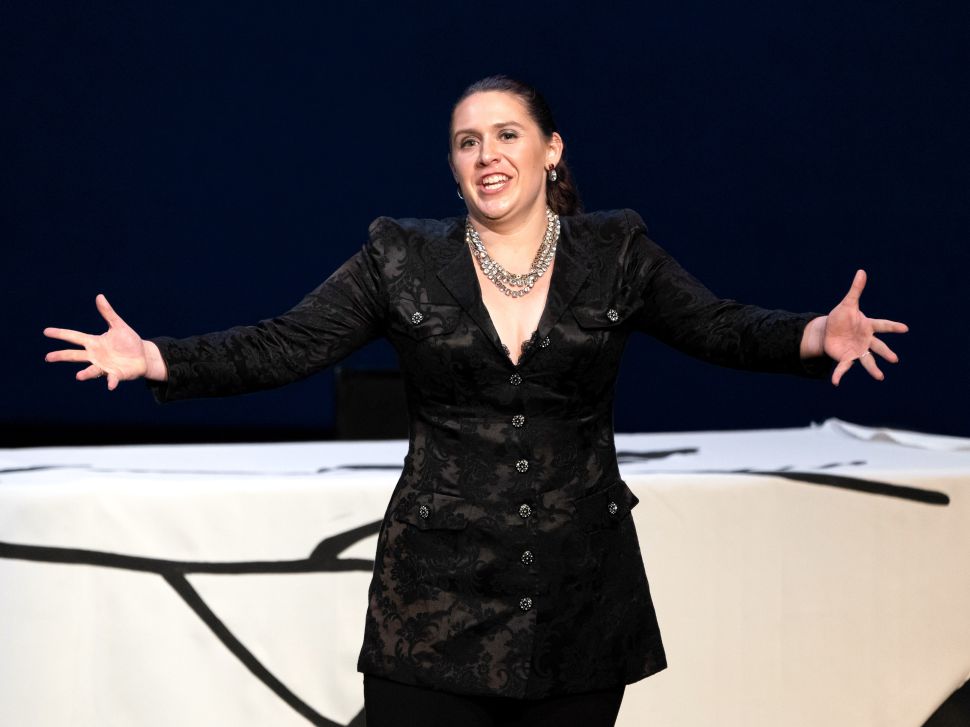