Over the weekend, social media was set ablaze by a set of three, bright pink seesaws that had been balanced across (and through) the United States-Mexico border wall, and which enabled children and adults on either side of the dividing structure to briefly play together. Teetertotter Wall was an installation that was brought to life by architects and artists Ronald Rael and Virginia San Fratello, who are professors at UC Berkeley and San Jose State University respectively.

It’s easy to process at a glance the reason why this simple setup was so impactful: slicing through the slats of the wall, the pink apparatus of the seesaw was instantly out-of-place and simultaneously coherent with the border’s architecture. It’s an appendage, not an obstruction. Plus, people on either side of the wall using the teeter-totters were clearly delighted by them.

One of the most incredible experiences of my and @vasfsf’s career bringing to life the conceptual drawings of the Teetertotter Wall from 2009 in an event filled with joy, excitement, and togetherness at the borderwall. The wall became a literal fulcrum for U.S. – Mexico relations and children and adults were connected in meaningful ways on both sides with the recognition that the actions that take place on one side have a direct consequence on the other side. Amazing thanks to everyone who made this event possible like Omar Rios @colectivo.chopeke for collaborating with us, the guys at Taller Herrería in #CiudadJuarez for their fine craftsmanship, @anateresafernandez for encouragement and support, and everyone who showed up on both sides including the beautiful families from Colonia Anapra, and @kerrydoyle2010, @kateggreen , @ersela_kripa , @stphn_mllr , @wakawaffles, @chris_inabox and many others (you know who you are). #raelsanfratello #borderwallasarchitecture #teetertotterwall #seesaw #subibaja

In an email to Observer, San Fratello explained that Teetertotter Wall had been transient. “The installation lasted for a little over 30 minutes while we ‘played’ on the border,” she said. “The teeter-totters were temporary and we have removed them.” According to Rael’s Instagram caption, the teeter-totters themselves were made with the assistance of a blacksmith workshop in Ciudad Juarez. “The seesaws are made of lightweight steel, painted hot pink,” San Fratello continued. “The seats are banana bicycle seats that were modified to attach to the steel.”

Border wall art has existed for as long as politicians and world leaders have felt the need for dividing walls in the first place, but the horror of the United State’s current border crisis feels fundamentally at odds with the notions of play and diversion. The Trump presidency didn’t invent the American practice of mass deportation, but the past couple of years have resulted in inhumane overcrowding in migrant detention facilities, family separation policies and a White House attitude that vehemently seeks to deter migrants from seeking asylum in the country.

The impermanence of Teetertotter Wall might be the most effective thing about it, because any gaiety felt under this administration seems to be quickly and mercilessly extinguished. 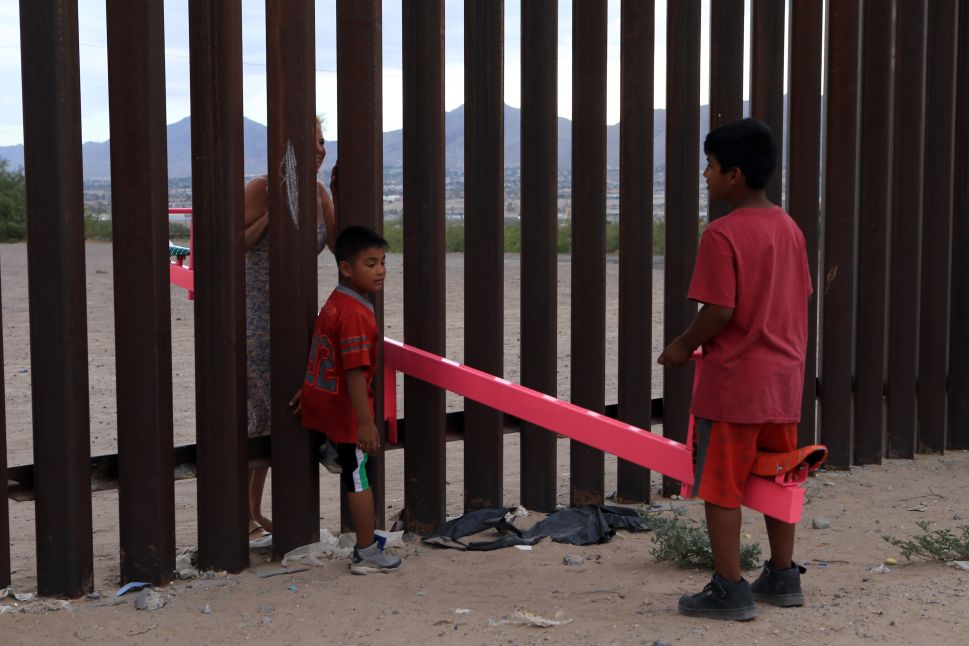