My laugh of the day is the deluded ecstasy with which a number of critics have flooded something derivative, artificial and loopy called The Art of Self-Defense. They all call it a parody of toxic masculinity, which is totally obvious without analysis. I’ll accept “profound” and “bleakly depressing.” But many of them have also knocked themselves unconscious trying to find new adjectives to describe how funny it is, calling this satirical send-up of Fight Club “disturbingly funny,” “tragically funny,” and “laugh-out-loud hilarious.” It is none of those things, and as remote from comedy as Santa Fe is from Fairbanks. We are definitely not on the same page.

SEE ALSO: Jesse Eisenberg on What You Can Learn From Getting Yelled at in Karate Class

Sure, writer-director Riley Stearns has something in mind that deserves a savage skewering. The pathetic lengths to which alpha males plummet to reinforce their phony definition of tough-guy American male superiority are laughable. Nolo contendre, guys. But the sum of the parts in martial arts on view here do not add up to a fascinating, consistently intelligent whole. You can write the plot on the head of an ice pick.

Jesse Eisenberg, who specializes in playing obnoxious nerds, essays the role of a mincing, 35-year-old accountant named Casey. He’s such a dweeb that even his dachshund looks at him with incredulity. Casey is shy, awkward, and made of cellophane. He lacks the most basic social skills to such an embarrassing degree that even the guys around the coffee maker at work insult, degrade and ignore him.

One night on his way home from buying dog food, Casey gets mugged by a gang of motorcycle-riding assailants. When he gets out of the hospital, he joins a karate class taught by an aggressive he-man instructor called Sensei (terrific and versatile Alessandro Nivola) who encourages Casey to learn German (the Nazis were role models, see), ditch classical music for heavy-metal rock, and seriously consider punching his boss in the throat. Instead, Casey stops petting his dog to make himself feel leaner, meaner and stronger.

In time, the movie turns from purple to black, matching the color of Casey’s karate belt. Promoted to Sensei’s secretive night class, he’s surrounded by macho men who strip naked to honor the true rewards of the karate-chopping lifestyle, which includes administering pain and suffering to all adversaries. Sensei reveals his own personal true nature, including breaking arms and legs, and what he regards as the ultimate holy grail of karate: encouraging his students to commit murder!

Eventually, Casey turns into a violent sadist himself, graduating from fearful to homicidal. By the time he learns that Sensei was part of the helmeted motorcycle gang that sent him to the emergency room in the first place, you’d think he would learn a valuable life lesson, reject the poison philosophy of martial arts, and do something to save the world from a fate similar to his own. But according to director Stearns’ bewildering screenplay, Casey is a lost cause. In the end, he falls for anyone who responds with relish to cruelty and hate, including the only girl in the class (Imogen Poots).

What this movie is really about is anybody’s guess. The point it wants to make about the American male’s disillusioned sense of what makes a man eluded me totally. Sensei is so insane that his academy even has a secret crematorium for the disposal of his victims, but his actual name is really “Leslie,” which is a far cry from the masculinity he encourages in others, and a name that becomes Casey’s source for empowerment and ridicule.

The engaging, hypnotic skill of Nivola holds the rest of the film captive. His Sensei is a total poseur, but Casey manages, in the end, to become his mirror image as if there is no alternative. I’m afraid none of this makes much valid sense. The movie fails to offer a cogent point of view. It doesn’t even end. It just fades to black. Funny? Yeah, like chemotherapy. 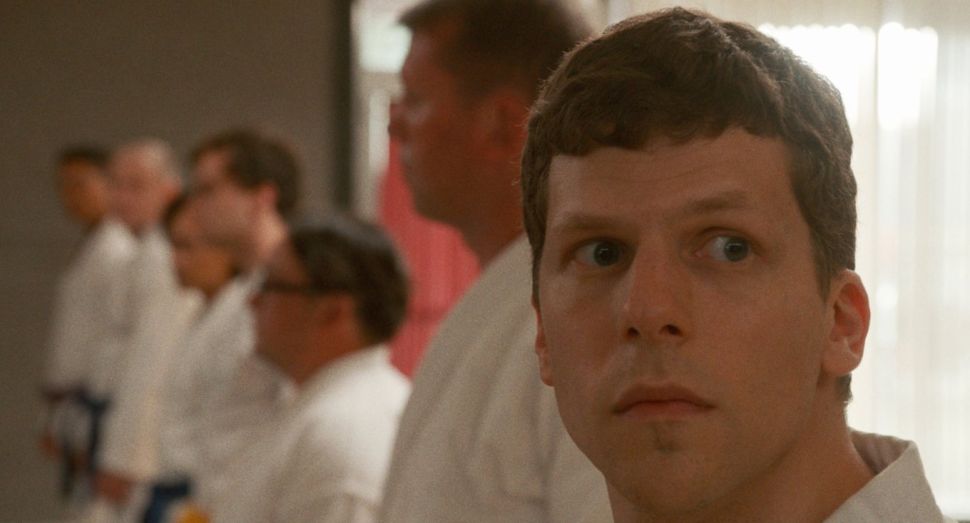