It was never about the tanks. Last week’s July 4 show in Washington, D.C., starring President Donald Trump—with “ft. America” buried deep in the credits—had, like everything else in the Trump presidency, an obvious singular focus. The military hardware—the entire United States military—was a stage prop.

Unreliable and pliable as he is, it is highly likely that Trump really does want a very large military parade, and it is entirely possible that we American citizens—and the deeply embarrassed professionals in the military, whose top leaders were nowhere to be seen during the “Salute to America” ostensibly honoring them—may yet be subjected to such a swollen and crass display. We can say this, because it is consistent with Trump’s character. The conventional narrative preceding July 4—that Donald Trump wanted to fill Washington, D.C. with a long line of armored vehicles bearing long, strong cannons after seeing the French do it on Bastille Day—is also probably true, for the same reason. The president’s quick surrender and retreat, after someone told him no, that it would be too hard, too expensive and too physically impossible, and him settling instead for a slightly upscale VFW hall treatment for his big speech is also pure and classic Trump.

The takeaway, what should be worrisome, is that the fizzle of his stationary parade was not a setback for the president. Tanks deployed in the role of menacing, 65-ton garden gnomes was just fine. All the time and content spent fulminating about the garishness of brandishing the hardware missed the point.

For his acolytes draping clear plastic over their bodies in wrestling-room humidity, wearing his campaign shirts and his red hats, professing their undying love for the man, the president was the draw. His is the latest portrait placed on an old and blighted altar. Tanks, and stealth bombers, and whatever else the military fields, is gild for the frame.

It can be said about Trump, the born-rich gossip-column president, that he has no personality aside from himself. Perfect. It was Trump’s personality—the tanks masking the predictable and mealy blandness of it all, like a very expensive and very lethal hot sauce—that was the subject of a state-sanctioned rally at the Lincoln Memorial on July 4.

"You never want to make events like this around a single person. This is the difference between the Soviet union – the old Soviet Union – and the United States. Cults of personality are not how we operate in this country," @EleanorNorton says about Trump's plans for July 4th. https://t.co/RvatGOiMMO

She may have been in denial—she may have been hoping that this wasn’t so—but Eleanor Norton figured it out early. On the day of, it was U.S. Rep. Betty McCollum (D-Minn.) who found the words. “Mr. Trump is hijacking the celebration and twisting it into a taxpayer-funded, partisan political rally that’s more about promoting a Trumpian cult of personality than the spirit of American independence and freedom,” she said.

When right-wingers bray about the left and personality cults, they are projecting. The right, the modern right, many of the same people currently enabling Trump, loved Ronald Reagan. They wanted him memorialized on currency immediately after his death. The notion of a Reaganite personality cult is an old one. To spend more than a few minutes in right-wing circles on Twitter is to be lost in a permanent Ronald Reagan memorial, the Republican equivalent of Red Square.

Trump is now the guy. Trump is now the icon for an American personality cult that has been without an able and willing figurehead to revere—at least not a living one—since Ronald Reagan. In Trump, all the ingredients for Juche in a red, white, and blue-colored fast-food wrapper are there: the big lie, manipulation of the media, slavish adoration.

Most morning-after analyses of the July 4 show were prepared for something else—the usual “lock her up,” some fresh hell maybe in defense of the detention centers at the border, or a round of Pocahontas-name calling ahead of the 2020 election—and thus they, too, missed the point. On Friday, the pundit classes blinked and nudged each other in surprise and relief. This—a long, slow, and one-note caress of the U.S. military, an institution Donald Trump avoided joining at all costs as a young man during wartime, but now wraps himself around or ducks behind like a shield whenever handy—wasn’t nearly as bad, as divisive, as aggressive, as petty and mean, as one of the president’s campaign rallies, or even the average pre-Fox and Friends tweetstorm. There were some historical blunders and some sabre-rattling, but we know now that making vague threats to annihilate this or that enemy is just what Trump does. For these reasons, Trump came off as anodyne, even “inoffensive,” as Vox offered.

This is the analysis of the benumbed, a descriptive class bombed into submission. As The New Yorker’s Masha Gessen observed, unbowed and eyes open, the speech was in fact “a high point in the president’s battle to command reality.”

“With the possible exception of rain streaks, the pictures from the rally are his image of himself and the country,” Gessen wrote on Friday. “Following his speech, Trump kept retweeting images of his own limo leaving the White House, of fighter jets flying, of the red stage and a strange cross-like formation of red elevated platforms, and of himself speaking.”

“In these pictures, Trump is the supreme ruler of the mightiest military empire in the history of the world and his people are with him in the public square,” she added. “Nothing else exists.”

Trump has queued up this track before. It’s his only hit. “I alone can fix it,” he said three summers ago now, at the Republican National Convention. “I am your voice.” Much of what has come since is a variation on this theme. All of his campaign rallies work like this, Nuremberg rallies in miniature. Thursday was the big one, when Trump figured out he could hijack the apparatus of the state to prop up his image of himself. The news, the very bad news, is that that also worked.

As Trump droned on in the rain on Thursday for more than 45 minutes, about ramming ramparts and taking over airports—triggering clever meme-makers to outsmart themselves and focus again on the decoration rather than the event—the two Abrams tanks and two Bradley fighting vehicles sat, silently, on the National Mall, useful as paperweights.

Tanks are all but obsolete in the U.S. Army’s modern warfare missions—unless a Cold War-style tank battle with Russia erupts in central Europe—but they are still very loud and very heavy and very strong, all the things that Donald Trump says he loves most. Turgid and abstruse, incongruous intrusions. The president wore the tanks like he wears his ties: compensation, defense. There isn’t much to him, after all. And he’s all many of us have. 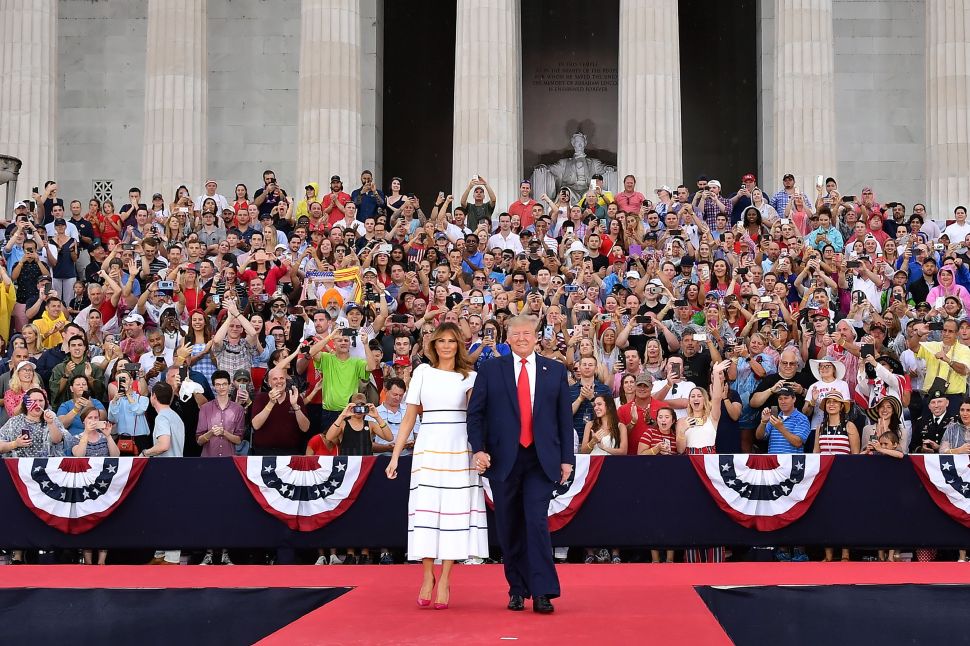